Erdogan may have declared victory over the Gulen group, after a warrant was issued for the arrest of Fethullah Gulen, but his headache with this group will not end. 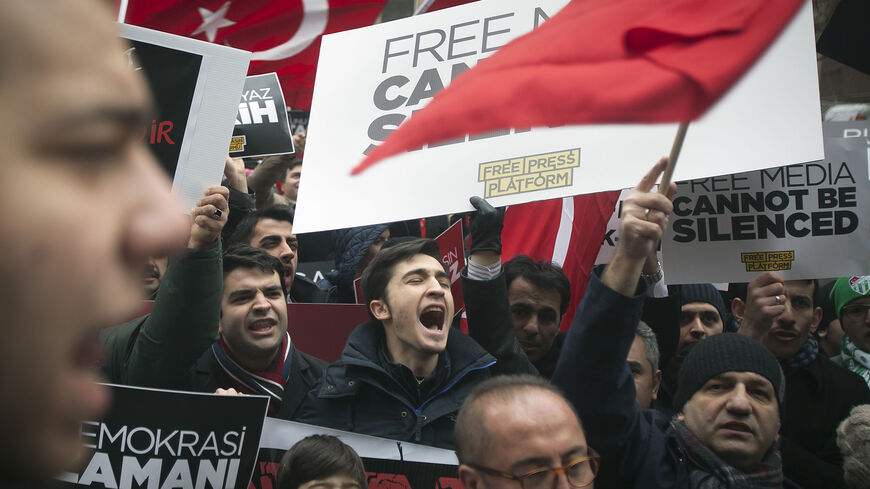 The latest development in the saga involves an arrest warrant issued by an Istanbul court Dec. 18 against Gulen. He is being sought for allegedly heading a terrorist organization that is being accused of establishing a “parallel state” to topple the democratically elected government.

The prosecution is reportedly preparing to also seek Gulen’s extradition from the United States, and will ask Interpol to issue a red notice for this purpose. These moves come immediately after the recent police operation — or witch hunt, as some are calling it — against the Gulen media.

Many believe the raids against the Gulen media and the legal moves against Gulen himself were carried out at Erdogan’s instigation. Legal experts doubt, however, that the case against members of the Gulen group can be sustained in the long run.

The chances of securing Gulen’s extradition from the United States also appear slim. The operation against his media group is already being criticized in the West, where many have begun to see Gulen as a victim of Erdogan’s political ambition.

The bitter war between Erdogan and Gulen broke out after prosecutors brought corruption charges in December 2013 against four ministers of the Justice and Development Party (AKP) government, which was headed by Erdogan at the time. There were also corruption allegations involving Erdogan’s son Bilal.

Erdogan claimed Gulen supporters lodged in the police and judiciary had invented this case to hit at the government over its legal moves undermining the vast interests of the Gulen group in the education sector.

The accused former ministers are currently under investigation by a parliamentary commission of inquiry, which appears unable to come to a decision due to obstruction by the panel's AKP members, who are in the majority.

Erdogan and Gulen were former allies against Turkey’s secularist and anti-Islamist Kemalist establishment. They acted in solidarity when high-ranking Kemalist officers, including a former chief of the General Staff, and their supporters in the civilian domain were charged, arrested and convicted of trying to engineer a coup against the AKP government.

Erdogan and Gulen fell out following the corruption charges leveled against the AKP ministers and became enemies overnight. The government also initiated a massive purge against members of the police and judiciary, as well as other departments of state, arguing that it was weeding out those who had established a parallel state within the state.

This purge, combined with the recent operation against the Gulen group’s media outlets and the legal moves against Gulen himself, appear to leave Erdogan the winner. During an award ceremony at the government-controlled Scientific and Technological Research Council of Turkey (TUBITAK) on Dec. 24, Erdogan openly declared victory against Gulen.

“This was a struggle for independence and a major obstacle facing us. It has now been exposed. By overcoming this obstacle, the path of politics, of the economy and foreign policy, as well as social life, education and science has been opened and will continue to be opened,” Erdogan said.

There are some, however, who believe Erdogan’s basking in the glory of victory may be premature. “It does not look like this story is over yet,” a Western diplomat in Ankara, who wished to remain anonymous due to his sensitive position, told Al-Monitor.

Erdogan’s victory will clearly not be complete as long as Gulen is free and able to cause a headache, given his ability to remain in the headlines at home and abroad.

Meanwhile, the legal process in Turkey against him will take time, and Gulen will also have recourse to the Constitutional Court and the European Court of Human Rights.

There is also no guarantee that an application to Washington for Gulen’s extradition will succeed, given the shaky nature of the accusations against him. Gulen lawyer Nurullah Albayrak has cited some of the complications the government will face in this regard.

Albayrak maintained in a statement that an extradition request for Gulen will merely highlight the fact that Turkey is not acting within the law.

He recalled that when Gulen was accused in the past of attempting to overthrow Turkey’s secular system, his deposition had been taken in the United States — where Gulen has been living since 1998 — after a formal request by Ankara. That case ended with Gulen’s acquittal. “The surprise expressed by the US attorney at the time over accusations that could not be taken seriously is well known,” Albayrak said.

He went on to maintain that the government knows very well that an extradition request for Gulen will fail, and is only trying to “manage political perceptions” against Gulen in order to use this in the lead-up to the general elections in June 2015.

Taha Akyol, a leading legal expert and columnist for the daily Hurriyet, also believes that the charges of “terrorism” and “coup attempt” leveled against the Gulen group are politically motivated.

“If a conviction is meted out on the basis of the crime of establishing a terrorist organization, and of attempting a coup, and if this conviction is not quashed by the Constitutional Court or by the European Court of Human Rights, then I will have to admit that I didn't study law,” Akyol, who is a lawyer by training, said in a recent column.

The war between Erdogan and Gulen is the result of corruption charges leveled against AKP ministers, which also involve Erdogan’s son Bilal. The parliamentary commission looking into the allegations appears to be at an impasse. If it decides that the accused former ministers should face trial, this will undermine Erdogan’s claim about a conspiracy by the Gulen group against him and the AKP.

If the commission decides, as a result of the majority of its AKP members, that the ministers should not face trial, this will be seen as a blatant attempt by the AKP to brush corruption allegations under the carpet. The stigma of corruption over Erdogan and the AKP will remain in either case.

In the meantime, the Gulen group, which has an extensive and active network in Turkey and abroad, will continue to keep itself on the agenda. The criticism Turkey is getting from the West over the hounding of the Gulen media is a case in point.

Erdogan may have declared victory over the Gulen group, but his political headaches in connection with this group appear far from over. It seems he is condemned to living under Gulen’s shadow for some time yet, one way or another.