Turkish Prime Minster Recep Tayyip Erdogan is calling for Fethullah Gulen's extradition from the United States to Turkey, but he should be careful what he wishes for. 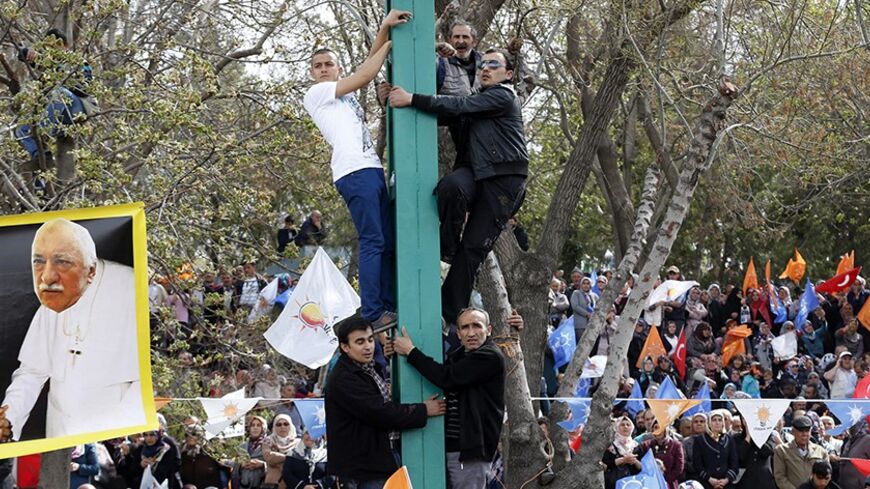 A poster depicting US-based Muslim cleric Fethullah Gulen as a pope is seen as supporters of the ruling Justice and Development Party attend an election rally in Konya, central Turkey, March 28, 2014. - REUTERS/Umit Bektas

Turbulence in ties between Ankara and Washington is increasing because of developments in Turkey. Prime Minister Recep Tayyip Erdogan wants the United States to extradite or, failing that, to at least deport Fethullah Gulen, the Pennsylvania-based Turkish imam who was once one of his closest allies against Turkey’s secularist establishment, but has become his archenemy.

Erdogan accuses the ailing Gulen, 73, who has been living in the United States since 1997, of being behind the corruption investigation opened by prosecutors on Dec. 17 that examined the actions not only of government ministers, who have since been forced to resign, but also of Erdogan's son Bilal.

Erdogan alleges this investigation is an attempted coup against his government by supporters of Gulen lodged within the judiciary and the police. He also blames Gulen supporters for a series of voice recordings leaked to the media over the Internet, which incriminate members of his Justice and Development Party (AKP) government.

These leaks resulted in the government’s banning of Twitter and YouTube, another issue that has caused tensions between Ankara and Washington. Twitter has since been reopened after a ruling by the Constitutional Court, but YouTube remains shut down.

Legal experts in Turkey and the United States agree that Washington is very unlikely to respond to Erdogan’s request, which has no legal basis as matters stand currently. No case has been filed against Gulen in Turkey, despite an investigation begun by a local prosecutor from Golbasi, a small town near Ankara.

The prosecutor is reportedly investigating whether Gulen committed a crime against the constitution, but it is not clear if this investigation will lead to a full-blown trial or to anything at all, for that matter.

According to The New York Times, the United States has to approve an extradition request from another country, but the person involved must be accused of a crime recognized in both jurisdictions, and there must be a reasonable belief that the person did commit the crime. “It was not clear whether Turkey’s request would satisfy either requirement,” the paper said in its April 28 article on the topic.

Given that it is highly unlikely that Erdogan is unaware that there is little chance of Washington complying with his request for extradition under prevailing circumstances, many people question whether he is actually sincere in this request.

Many also wonder if Erdogan really would want Gulen in Turkey, incarcerated and facing a highly publicized trial, given the great controversy this would create among Islamists in and outside the country.

Despite Erdogan’s all-out war against him, Gulen continues to have millions of supporters in Turkey and abroad. None of this has, however, prevented Erdogan from laboring the point in a PBS TV interview with Charlie Rose, aired on April 28.

Asked what he expected Washington to do about Gulen and his group, Erdogan said it was sad that such a group was allowed to exist in the United States. “They can be delivered, or they can be expelled,” he said. “It’s as simple as that. If, for example, someone is a threat to the United States and we get that information and we catch them, we hand them over. I have done more than 10 handovers like this so far, and I would expect the same thing from our strategic partner, the United States, because these have been attempts to threaten our national security.”

One could argue, based on these words, that there was an element of emotional blackmail in Erdogan’s citing of the “strategic partnership” between Turkey and the United States, and his reference to past extraditions by Turkey.

Clearly aware that Washington cannot act on his request in the way he wants, Erdogan appears, however, to be playing more to his domestic gallery by creating the impression that he is pressuring the United States

He displayed a similar attitude during an interview with the pro-government news channel A Haber on March 6, when referring to a phone conversation he had with US President Barack Obama.

“I told Obama that the person who is responsible for the unrest in Turkey lives in your country, in Pennsylvania. I told him this clearly. I said, ‘I expect what’s necessary [to be done].’ You have to take the necessary stance if someone threatens my country’s security,” Erdogan said, alleging Obama had responded by declaring, “Message received!”

The White House, however, disputed Erdogan’s account of the conversation with Obama. “The response attributed to President Obama with regard to Mr. Gulen is not accurate,” it told Hurriyet in a written statement on March 7.

But that was before the March 30 local elections, and Erdogan’s intention in creating the impression that Gulen’s days were numbered in the United States worked for him, as attested by headlines in the pro-government media at the time.

Erdogan and members of his government clearly continue to see political value in maintaining the impression that Ankara is demanding action from Washington over Gulen. Deputy Prime Minister Besir Atalay was quoted by the semi-official Anadolu Agency on March 4 saying the Gulen question was an important issue in Turkey-US relations and would continue to be so for some time to come.

This approach by the Turkish government, however, is causing increased anger on the US side, a fact that was made apparent by The New York Times editorial board in its strongly worded editorial on May 2, carrying the headline “Let Mr. Erdogan Fight His Own Battles.”

“Mr. Erdogan is trying to drag the United States into the argument by threatening to demand Mr. Gulen’s extradition to Turkey. The American government is obliged to examine the request if Mr. Erdogan follows through and formally files one. But right now the threat seems to be nothing more than a crass and cynical attempt to exploit the law, and Turkey’s alliance with the United States, for political payback,” The New York Times said.

Meanwhile, a Gulen-affiliated group in New York, going under the name of Alliance for Shared Values, was quoted by The New York Times on April 29 as saying, “The prime minister’s talk about demanding the extradition of Mr. Gulen, when there are no charges or legal case against him, is a clear indication of political persecution and harassment.”

None of this is stopping Erdogan. Within hours of his interview with Charlie Rose, he was telling his deputies in parliament that Ankara had started the ball rolling for the extradition of Gulen. He did not provide any details, however, on what legal procedures had been put in place and members of his government remain vague on the topic.

But as legal experts are pointing out almost unanimously, even if a regular legal process were initiated by Ankara against Gulen — which would also have to involve a case being opened against him in Turkey — getting him back from the United States would take months, if not years.

There is also the distinct possibility that US courts will see this as more of a political case than a legal one by Turkey against Gulen, and never extradite him. It would be foolish to assume that Erdogan is not aware of all this.

That is why the general assumption is that Erdogan is indeed playing a cynical game with the Gulen issue, and also involving the United States in this, in a populist effort aimed at his own constituency in the lead-up to the presidential elections in August, where he is expected to run.

There is of course another possibility in the Erdogan-Gulen standoff, unlikely as this may appear from today’s perspective. Gulen, in a moment of angry defiance, may choose to go to Turkey of his own accord to face the government’s music.

Given the crowds that would welcome him on his arrival at the airport, and the live coverage his every move would receive, this would end up posing a massive embarrassment for Erdogan and his government.

Erdogan is also not 100% certain that all his deputies in parliament agree with the way he has been hounding Gulen, an imam previously much revered by all Turkish Islamists. It is therefore more than likely that Erdogan actually prefers Gulen to stay in Pennsylvania, and provide the AKP with political fodder, rather than see him come to Turkey, where he is bound to cause serious headaches for the government.