How wise is Turkey’s plan to revoke Gulen’s citizenship?

Ankara has laid the legal groundwork to revoke the citizenship of the accused mastermind of last year’s coup attempt, Fethullah Gulen, a controversial move in which some see covert motives. 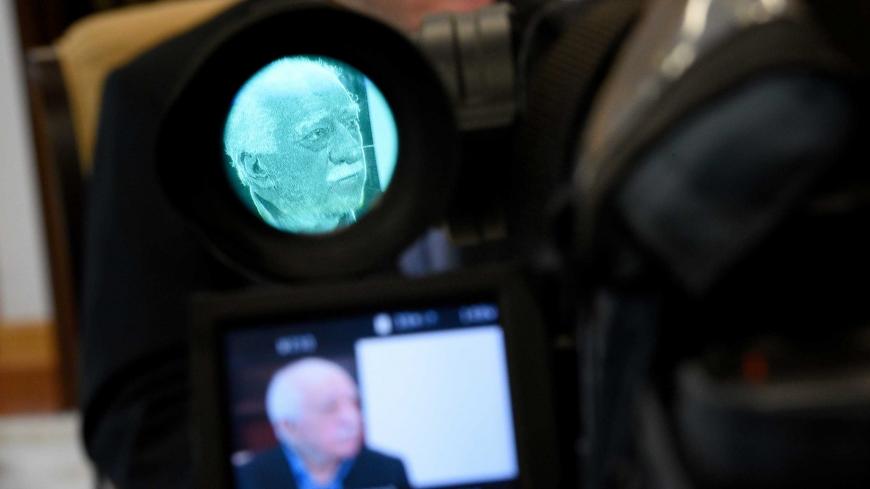 US-based Turkish cleric Fethullah Gulen is seen through a television camera during an interview at his home in Saylorsburg, Pennsylvania, July 10, 2017. - REUTERS/Charles Mostoller

Fethullah Gulen, the US-based Muslim cleric accused of masterminding the July 15, 2016, coup attempt in Turkey, could soon be stripped of his Turkish citizenship while he remains on trial in absentia on myriad charges carrying gigantic sentences. The government has already laid the legal ground for the move, but why it plans to revoke Gulen’s citizenship remains a controversial question.

President Recep Tayyip Erdogan had signaled the start of the process in October 2016 when he made a remarkable comment on fugitive coup suspects. “We’ve said they’ll be running and we’ll go after them. They can run wherever they want,” Erdogan said. “Let them now become citizens of the countries where they fled. They will no longer be remembered as citizens of this nation.”

A few months after Erdogan’s remarks, the government used a legislative decree — a powerful instrument it wields under the state of emergency — to enact an amendment that paved the way for the denaturalization of those who face investigations for “crimes against the security of the state” and “crimes against the constitutional order” but who remain overseas and cannot be reached.

Following a June 4 meeting, the Council of Ministers issued a call in the Official Gazette for 130 individuals to return home, with Gulen on top of the list. The call included a warning that those who fail to return within three months would lose their citizenship. The three-month period ended Sept. 5, and the Council of Ministers is expected to revoke the citizenships of the fugitives, including Gulen, in the coming days.

Erdogan’s remarks that the fugitives “would no longer be remembered as citizens of this nation” suggest that the government sees the citizenship measure as a moral punishment that would pander to the nationalist feelings of its base. Yet the legal aspects of denaturalizing coup suspects go well beyond the ramifications of moral punishment.

Gulen’s case is the most revealing in this regard. The cleric, whose movement was the government’s de facto ally for years, has been indicted in dozens of cases after the coup attempt, risking thousands of jail sentences that make a precise calculation difficult. Given the fact that he is held responsible for the deaths of 249 people killed in the course of the putsch, he faces 249 life sentences at the very least.

Government officials have argued that stripping Gulen of his citizenship will have no disruptive impact on his trials. Legal experts contacted by Al-Monitor agree. In short, the trials will continue without any obstacle to convictions. The real question is about the post-conviction phase: How could Gulen be brought to Turkey and put in prison?

The experts contacted by Al-Monitor draw attention to a universal legal principle that calls for no one to be left stateless. This implies that acquiring citizenship from another country could be relatively easy for Gulen. Many in Turkey believe he would seek to become a citizen of the United States, where he has lived since 1999. Such an eventuality would still allow Turkey to request Gulen’s extradition under a bilateral extradition treaty, but things would be left completely to the United States’ volition, the experts note.

And what if Gulen ends up in a country with which Turkey has no extradition treaty? Australia, Canada, Mexico and Thailand are only a few of the countries in this category. Such a scenario would make things really difficult for Turkey, for it would be unable to make an extradition request. Thus, bringing Gulen back to put him in prison would become rather impossible, according to the legal experts contacted by Al-Monitor.

Ankara’s efforts to have Gulen extradited have already proven onerous, adding to political tensions with Washington. Then why is Ankara planning to revoke Gulen’s citizenship, which would make his imprisonment in Turkey even more difficult?

According to the main opposition Republican People’s Party (CHP), the government’s underlying objective is precisely that: to minimize the chances of Gulen returning home. “If Gulen is brought to Turkey, he will have to immediately appear before court and testify. The aim is to prevent any such testimony,” CHP deputy Mahmut Tanal, a lawyer by profession, told Al-Monitor.

Stressing that the Gulen community and the ruling Justice and Development Party (AKP) were partners for years, Tanal said, “If Gulen testifies, he will reveal all that they did together. The AKP does not want this to happen; hence, it is revoking Gulen’s citizenship.”

Examples from Turkey’s recent past also cast doubt on the AKP’s motives. Take for instance the case of Abdullah Ocalan, the leader of the outlawed Kurdistan Workers Party, who was captured in Kenya in 1999 after a lengthy, painstaking pursuit in various countries. During those years, when Ocalan was the country’s most wanted man, Turkish governments never attempted to revoke his citizenship. “If Ocalan had been stripped of his citizenship, his return would not have been that easy,” Tanal said.

In sum, the plan to revoke Gulen’s citizenship comes with the prospect of serious legal consequences, though it could please Erdogan’s supporters. If the move does result in eradicating all possibility of Gulen’s extradition, the onus will be on Erdogan. Judging by the huge political risk he is taking, the allegations of underlying motives seem difficult to dismiss.