Senior Turkish bureaucrats say Hamas is welcome in Turkey, but its activities are strictly monitored. 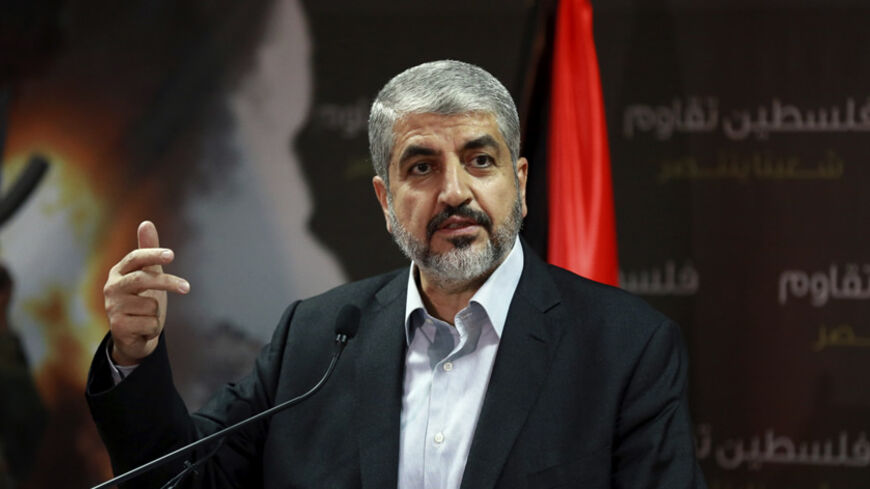 On Dec. 25, Hamas political bureau chief Khaled Meshaal arrived in Turkey on a visit that was not announced publicly. After receiving a tip, Al-Monitor spoke with two high-level Turkish bureaucrats on condition of anonymity about the meaning of this visit.

One official affiliated with the security apparatus in Turkey told Al-Monitor, “Meshaal arrived in Istanbul and traveled to Ankara the next day. It was not a secret visit, but there was no need to get publicity. However, when the president [Recep Tayyip Erdogan] meets with anyone, we cannot really assume it will remain secret.”

Turkish Prime Minister Ahmet Davutoglu appeared on Dec. 27 with Meshaal in Davutoglu's hometown, Konya, for the Justice and Development Party’s (AKP) annual assembly. Known for being conservative, Konya residents jubilantly greeted Meshaal, as reported by Islamist news network Takva Haber: “The democratic and secular Hamas leader reminded Konya residents of their protests in the 1980s in solidarity with Jerusalem."

Turkish mainstream media reported Meshaal’s appearance in Konya as a surprise visit. Meshaal gave a brief but potent speech in which he praised Erdogan and Davutoglu multiple times as the crowd waived Turkish and Palestinian flags, passionately cheering “Allahu akbar" (God is great) and "Down with Israel.” Meshaal said: “A strong Turkey means a strong Jerusalem and a strong Palestine. … Inshallah [God willing], we will liberate Jerusalem together. A strong Turkey is a source of power for all Muslims.”

While Meshaal thanked the AKP for having him as a guest of honor at its assembly, only a few lonely voices in Turkish social media were questioning why Hamas was represented at the AKP event. One Twitter user wrote: "Since Erdogan cannot travel to Gaza, they brought in Meshaal to AKP's assembly."

Although an overwhelming majority of Turks from secular and Islamist sections of society support the Palestinian people, not everyone is comfortable with the close relationship between Hamas and the AKP.

Turkey took in 10 high-ranking Hamas members as part of the Gilad Shalit prisoner exchange in December 2011, but the connection did not stop there. In the midst of the Syrian civil war, Hamas decided to leave Damascus, and some of its prominent members such as senior official Saleh al-Arouri have been welcomed in Turkey. On Aug. 20, Arouri made the headlines with his notorious speech from Istanbul condoning the kidnapping of three Israeli teenagers in June.

There have been strident and consistent allegations in the media about the unfettered access Hamas members have to different resources in Turkey. Jonathan Schanzer, the vice president for research at the Foundation for Defense of Democracies, has published a list of Hamas members believed to be residing in Turkey. Schanzer has repeatedly warned about Hamas members’ relations with Turkish nongovernmental organizations and government officials. The nature of the relationship has become contentious, yet not enough evidence has been released. Hence, Schanzer reported it was not clear whether the US State Department or NATO would talk to Erdogan about Turkish relations with Hamas.

On Dec. 9, Julian Pecquet reported for Al-Monitor: “Members of the House Foreign Affairs Committee want the Treasury Department to 'take all necessary measures' to stop Qatari and Turkish support for Hamas.”

The second high-level bureaucrat Al-Monitor spoke to said, “We work so hard to do good for the Palestinians, we sometimes overlook the public relations and diplomacy aspects of it. We fail at times to adequately explain what it is that we strive for in the Middle East.”

She added, “I must clarify that for all Hamas members we apply the rules of the prisoner exchange diligently, [and] even those who were not a part of the deal. It is because we firmly believe in the importance of preserving the regional order. Turkey became a refuge for many political figures in the region by providing humanitarian assistance to political exiles. Turkey allows in these people who are persecuted in their own countries, but this is a humanitarian asylum policy. Those who are guests in Turkey well know that their ability to stay depends on their activities. As long as they do not resort to violence or [are] part of violent activities they are welcomed in Turkey. Turkey would not allow [anyone] to use [it] as a launching pad for any other activities.”

She then said, “Indeed, we are aware there have been quite a few officials who decided not to seek refuge in Turkey due to our diligent monitoring process. We make it clear to all those who may harbor the intention to engage in any illegal activities that they are better off not coming to Turkey. Some are deterred in advance.”

The other official told Al-Monitor, “Just to clarify, Hamas members are in Turkey as part of the Gilad Shalit deal. All the related parties know about the conditions of these agreements. As it was acceptable to host some Hamas members back then [December 2011], it is acceptable right now as well. Nothing has changed in the meantime regarding Hamas’ identity. Well, indeed, let me correct, the EU court took Hamas off the terrorist organization list [in December 2014]. There are also European countries that view Hamas as a political party.”

Times indeed are changing fast, because recently senior Hamas officials confirmed that they are patching up relations with Iran. It was none other than Meshaal who reportedly headed the delegation to Tehran on Dec. 8. Yet, there have been rumors since May that a Hamas-Iran rapprochement was in the works.

All of these developments cause people to speculate on what Erdogan and Meshaal discussed on this last visit. According to one of the Turkish bureaucrats, “There are several topics that are easier handled face to face. We do not have the permission to disclose everything we know or all the information that we have. However, we can share the main agenda topics, which require coordination. For instance, the reconstruction of Gaza after the last war is an important matter, in addition to the Syrian crisis, the effects of rapprochement with Iran on Hamas — where some of the Hamas members will be relocated — and most importantly the general well-being of the Palestinians.”

Despite intense speculations and doubts about Hamas’ activities in Turkey, the Turkish bureaucrats seem confident that Turkey monitors the activities of Hamas members closely and extend only humanitarian assistance to political-asylum seekers. Given the shifts in Qatar and Iran’s relations with Hamas, it seems the AKP used this opportunity to tell its domestic and foreign audiences they are standing with Hamas openly in the face of all other changes in the region.