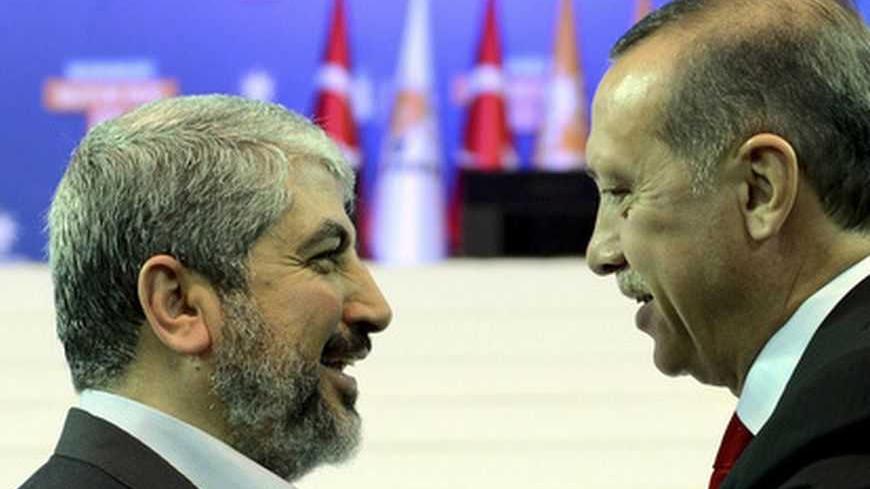 The state-controlled Anatolian News Agency reported on Tuesday, Feb. 19, after Hamas’ political bureau chief Khaled Meshaal left Turkey that he had met with Prime Minister Recep Tayip Erdogan the day before, at the prime minister’s office in Ankara, to discuss the Palestinian reconciliation efforts.

“It was learned that Meshaal informed Erdogan about the efforts and the substance of the reconciliation talks between the Palestinian factions,” the news report said. “It was also stated that Prime Minister Erdogan told Meshaal, 'It is of great importance that the process to reconcile the Palestinian factions continues without interruption, and that it will also impact the peace process positively.'”

While Meshaal’s visit was described as “secretive” by Turkish television, the local Palestinian sources told Al-Monitor that he actually arrived in Ankara late on Sunday evening and left on Tuesday; however, it's bizarre for Meshaal to visit Ankara in such a covert manner.

A lot of water has passed under the bridge since Meshaal first visited the Turkish capital in February 2006. Back then, Erdogan backed away from meeting the Hamas political bureau chief in person to avoid the inevitable Israeli and US reactions. Not that Erdogan considers Hamas as a terrorist organization as they do, but he probably calculated that Meshaal’s showing up in Ankara after it scored a win at the Palestinian elections was good enough to send the message as to where the Erdogan government stands on the Israeli-Palestinian issue.

Fast forward, it was no one else but Meshaal in October 2012 who received the standing ovation and the most applause at the Justice and Development Party’s National Congress. Moreover, Erdogan publicly made it very clear that his heart was joining Meshaal in his first visit to Gaza in December to mark Hamas’ 25th anniversary. Erdogan’s visit to Gaza still remains possibility.

There is still no Hamas contact person in Ankara — again out of concern for the US reaction to it, but there are a number of Islamic NGOs that work closely with Hamas, and all are considered in good standing with the ruling AKP. Analysts in that network speculate that Erdogan and Meshaal most likely discussed issues related to the Syrian conflict, more than the Palestinian reconciliation efforts.

Until the Syrian civil war got underway, Meshaal was based in Damascus, and Turkish Foreign Minister Ahmet Davutoglu had met him numerous times there. The Ankara beltway rumors suggest that Erdogan wanted to get more precise knowledge as to what Meshaal thinks about the remaining strength of the Syrian regime as well as the likelihood of Hamas joining forces against the Kurdish militants that aim at Turkey’s security interests.

Erdogan today is more blunt in extending his support to Hamas, which is declared a terrorist organization by many in the Western world — while those Western capitals also favor negotiations between the Israeli government and Hamas, as well. In most cases, the Western leadership only engages with such groups when it becomes clear that a major breakthrough is imminent.

So far, however, the Erdogan government has not been able to showcase that its direct engagement with Hamas has served Turkey’s political-security interests — or the regional security. Even for Erdogan, this can’t go on like that, and that he would like to see some clear benefit from putting his support behind Meshaal. Perhaps, just perhaps, this visit was secretive for that reason — that it was not a departure in the ideological sense between Erdogan and Meshaal, but that the Ankara government meant to send a message to Hamas supporters that it needs their support on Syria’s fragmentation, and the likely Kurdish breakthrough in the region from Iraq to Syria — all surrounding Turkey’s borders.

If these speculations have any truth, though, and that Turkey looks for support from Hamas for its defense, maybe it’s really time to pray to God to watch out for Turkey!