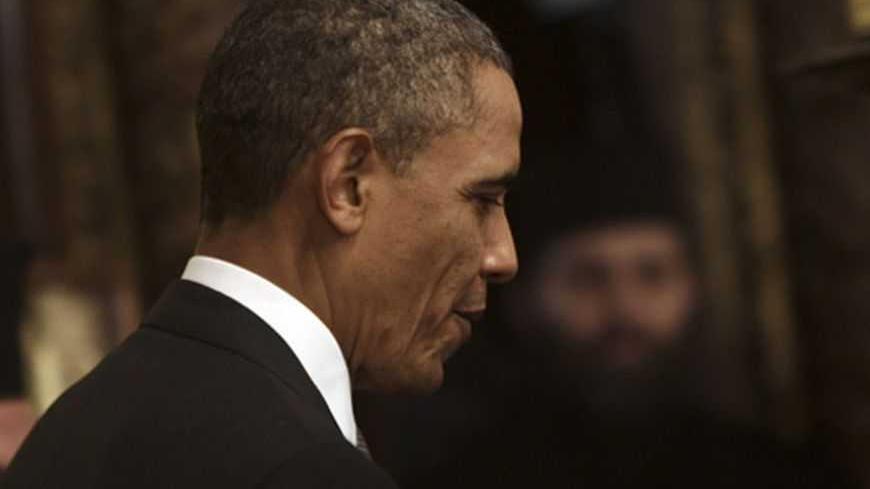 US President Barack Obama visits the Church of the Nativity in Bethlehem, the West Bank, March 22, 2013. - Getty Images/Atef Safadi-Pool

Much has been said about whether US President Barack Obama’s visit to Israel and the West Bank this week served any good for revamping the peace process.

While the jury is still out on what happens with the peace process, Obama will return to Washington from his Middle East tour with one solid victory.

Turkey and Israel decided on Friday [March 22] to renew their friendship for the sake of regional security and stability, and therefore agreed to put behind their differences over the 2010 Mavi Marmara incident.

Obama pulled some deft diplomacy on the tarmac as he was about to leave Israel by orchestrating an icebreaking conversation between Israeli Prime Minister Benjamin Netanyahu and Turkish Prime Minister Recep Tayyip Erdogan, in which Netanyahu apologized to the Turkish people.

“In light of Israel’s investigation into the incident which pointed to a number of operational mistakes, the prime minister expressed Israel’s apology to the Turkish people for any mistakes that might have led to the loss of life or injury and agreed to conclude an agreement on compensation/nonliability,” the statement from Netanyahu’s office read. “Prime Minister Netanyahu also noted that Israel had substantially lifted the restrictions on the entry of civilian goods into the Palestinian territories, including Gaza, and that this would continue as long as calm prevailed.”

If Erdogan had not made controversial remarks equating Zionism to crime against humanity at a UN conference in Vienna on Feb. 27, this surprise breakthrough between Israel and Turkey might not have taken place. The US side made it clear that Turkey had gone too far with those remarks and that it hurt US-Turkish bilateral relations. This was something that Erdogan could not afford, and it yielded results. The first signal that something was being worked out came just as Obama arrived in Israel on Wednesday [March 20]. Erdogan’s interview with Danish newspaper Politiken, in which he softened his controversial remarks on Zionism, was published the same day and apparently played a crucial role in the making of this much-expected breakthrough.

“Prime Minister Netanyahu said he had seen Prime Minister Erdogan’s recent interview in a Danish newspaper and appreciated his words,” the statement from the Israeli Prime Minister’s office continued to read. “He made clear that the tragic outcome of the Mavi Marmara incident was not intended by Israel and that Israel regrets the loss of human life and injury.”

Stating that Turkey has received all it asked for to put the Mavi Marmara incident behind it, Turkish Foreign Minister Ahmet Davutoglu said, "After three years of sewing the process like an embroidery, we got the result." He moved on to say, "We stood firm on our principles. Israel felt isolated. One needs to raise one's voice sometimes in diplomatic language but without falling out of line with diplomatic customs. Turkey has never moved away from these customs. Today's development was agreed upon earlier."

Speaking in Amman, Jordan, Obama stressed, "It is in the interest of the United States that they begin this process of getting their relationship back in order, and I'm very glad to see that it's happening." The White House statement also drew attention to the fact that the US values its "close partnership with both Turkey and Israel," and that it attaches "great importance to the restoration of positive relations between them in order to advance regional peace and security."

What is, however, interesting is that there are whispers in the Ankara beltway that Davutoglu was kept out of the loop as Erdogan and Netanyahu took the bold step of a virtual handshake, and that he was apparently surprised when the news broke. True or not, it remains to be seen whether Turkey will now soften its rhetoric against Israel and will resume its mediator role between Israel and the Arab countries. There is no doubt that the relationship will not be the same as it used to be; it likely won't rise above a strong military cooperation, although civilian politics will shape its next chapter.

Tulin Daloglu is a contributing writer for Al-Monitor's Turkey Pulse. She has written extensively for various Turkish and American publications, including The New York Times, International Herald Tribune, The The Middle East Times, Foreign Policy, The Daily Star (Lebanon) and the SAIS Turkey Analyst Report. She also had a regular column in Washington Times for almost four years.