Turkish Prime Minister Recep Tayyip Erdogan’s attempt to clarify earlier remarks on Zionism may aim in part to repair ties with the United States, which have also been strained by Ankara's refusal to hand over an al-Qaeda official to US authorities, writes Tulin Daloglu. 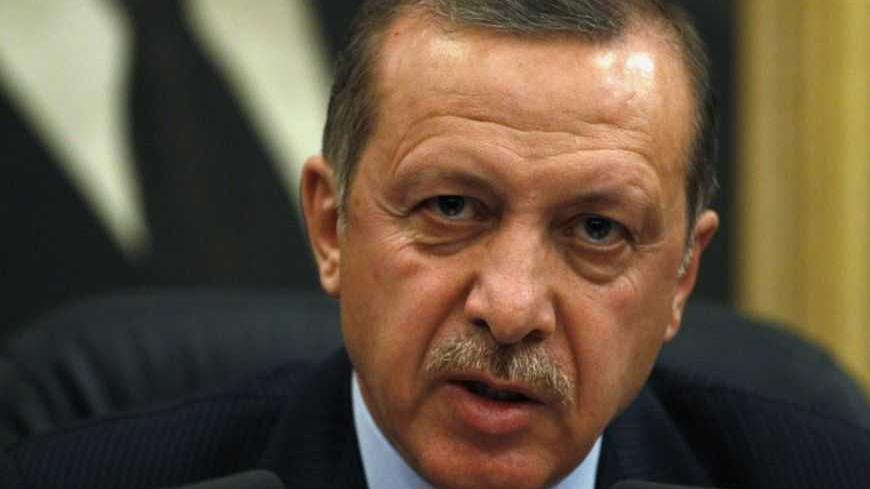 Turkish Prime Minister Recep Tayyip Erdogan addresses the media in Ankara before his flight to Denmark for an official visit on March 19. - REUTERS/Umit Bektas

As US President Barack Obama arrived in Israel on March 20, Turkish Prime Minister Recep Tayyip Erdogan began an official visit to Denmark with an effort to clarify the controversial remarks he made on Feb. 27 at a UN conference in Vienna referring to Zionism as a crime against humanity. “Let no one misunderstand what I said. Everyone knows that my criticism [of Israel] focuses on some critical issues. It’s directed especially toward Israeli policies on Gaza,” Erdogan said in an interview with Politiken, a Danish newspaper. “As long as Israel denies Palestinians the right to statehood, our criticisms will continue. On the other hand, we have recognized Israel’s existence within 1967 borders based on a two-state solution.”

When US Secretary of State John Kerry visited Turkey on March 1, Erdogan had expected him to extend an invitation to meet with Obama at the White House, an appointment the Turkish prime minister had been requesting for some time. He did not receive one. A US official who spoke with Al-Monitor said, “His remarks on Zionism hurt the bilateral relationship.” It is thus worth noting that Erdogan offered his first public explanation of his remarks as Obama began his first official visit to Israel. Whether his comments will satisfy the White House and Congress is yet to be seen.

Erdogan's statement on Zionism is not the only issue that has put distance between the Obama administration and the government in Ankara. One other incident in particular stands out. Turkey has often criticized the United States for failing to fully cooperate in its fight against the terrorism of the Kurdistan Workers Party. On Feb. 1, when a suicide bomber struck at the US Embassy in Ankara, news broke that with the cooperation of the Central Intelligence Agency, Suleiman Abu Ghaith, former al-Qaeda spokesperson and son-in-law of Osama bin Laden, had been arrested at a hotel in Cankaya not so far from the residences of the US ambassador and Turkish president.

When Abu Ghaith appeared before a Turkish judge, the only charge against him was that he had crossed illegally into Turkey from Iran. No terrorism charges were considered. This is ironic, and tragic, for a number of reasons. The one that stands out for Turks is that more than 400 Turkish military personnel, including a former chief of the General Staff, currently find themselves behind bars, accused of being terrorists and engaging in conspiratorial activities to overthrow the Erdogan government.

Fanning the flames, authorities in Ankara refused to extradite Abu Ghaith to the United States and instead deported him to Kuwait. “On a stopover in Amman, American officials took him into custody and flew him to New York,” the New York Times reported on March 7. “Jordan’s spy service, the General Intelligence Directorate, is one of the Central Intelligence Agency’s closest partners in the Middle East.” US officials speaking to Al-Monitor expressed their utter frustration and disappointment with Turkey in this matter.

Later, on March 13, Turkish media reported that Kerry had had a telephone conversation with Foreign Minister Ahmet Davutoglu in which the secretary of state reportedly asked his counterpart whether Turkey would engage in efforts to help the Israelis and Palestinians resolve their differences. Davutoglu responded in the negative for one obvious reason: Israel has yet to apologize to Turkey for the May 2010 Mavi Marmara incident off the Gaza coast in which Israeli commandos killed nine Turks.

According to Davotoglu, until an apology is forthcoming from Israel, there can be no dialogue between the two states, even on critical issues. It is well past the time, however, for Turkey and Israel to craft some sort of resolution for the unfortunate deaths of the Turks aboard the Mavi Marmara. The farther Ankara and Jerusalem grow apart, the more it feeds into the unnerving instability of the region. In addition, the Erdogan government’s strategy of criticizing Israel to showcase Turkish leadership of the Sunni world has hit a stumbling block at the Obama White House.

A complete falling out between the United States and Turkey is unlikely, as it would serve no one's interest. More likely is that the Obama administration will do its best to preserve the bilateral relationship while also trying to help repair, as much as it can, Turkey’s tattered ties with Israel.