Erdogan Slammed for Comments On Zionism 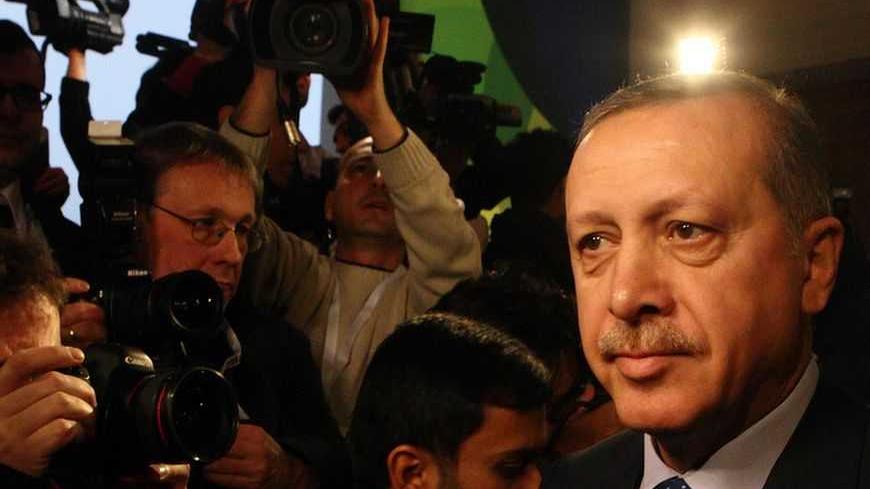 Turkish Prime Minister Recep Tayyip Erdogan’s remarks equating “Zionism” to a “crime against humanity” at the Fifth Global Forum of the Alliance of Civilizations on Feb. 28 received strong reactions from the U.N. secretary-general, United States and Israel. His remarks, however, supplement what Iranian President Mahmoud Ahmadinejad said at a special session of the Organization of Islamic Cooperation on Feb. 6. “In the course of the 65 years since the establishment of [Israel], it has imposed war against the people of Palestine and the regional countries,” Ahmadinejad said. “Hearing the name of Zionist regime is today synonymous with war, death and bloodshed.” And Erdogan’s remarks were, "It's necessary that we must consider — just like Zionism or anti-Semitism or fascism — Islamophobia as a crime against humanity."

Both are followers of Islamist ideology, placing Erdogan closer to Ahmadinejad on this issue. While they jockey to expand their influence in the newly emerging order in the Middle East, where Islamist governments are coming to power one by one, Turkey appears to be gaining the edge by playing for the leadership of the majority Sunni population in the region. Iran’s siding with the bloody Syrian regime of Bashar al Assad has been badly received in its neighborhood, to say the least. It is, however, still unclear how the region is going to evolve or develop in the coming decades, but the current trend lends excitement and a sense of victory to the Islamist camp.

The point is, as most followers of political Islam, Erdogan is aiming at Israel, using it as a whipping boy to bring Muslim masses to his side. He and his foreign minister, Ahmet Davutoglu, would have preferred a Middle East without Israel, but could tolerate Jews living on the land of today's Israel as citizens of Palestine. This interpretation is certainly not hypothetical. This is, in fact, the basis for the modern Islamist narrative of hatred toward Jews. When Israel was created, it evolved into hatred toward Israel, as they want Palestine back.

Erdogan actually needs to be applauded for providing a prime example by making this point upfront, and for his outright honesty in revealing himself in full. For Erdogan, Zionism does not mean "a form of nationalism of Jews and Jewish culture that supports a Jewish nation-state in the territory defined as the Land of Israel." For Erdogan and the followers of Islamist ideology who directly challenge the legitimacy of the Jewish state, Zionism is the ultimate enemy of Islam backed by the United States and the United Kingdom.

It was no surprise, then, that Secretary of State John Kerry's visit to Turkey on Friday [March 1], part of his first foreign travel, was overshadowed by Erdogan's remarks at the U.N. conference. "We not only disagree with it, we found it objectionable," Kerry said at a news conference with Turkish Foreign Minister Ahmet Davutoglu. Kerry said he would also raise the issue directly with Erdogan. After their meeting, there has been no statement from the Prime Minister or his office on this issue. Moreover, Erdogan was expecting that a date for his meeting with President Barack Obama was to be announced during Kerry’s visit. It did not happen.

The growing rift between Turkey and Israel is a point of concern for the U.S. administration. The concern is not only that these two countries are vital allies for Washington, but that their falling off from each other is creating a sense of instability in this troubled region. “Given the many challenges that the neighborhood faces, it’s essential that both Turkey and Israel find a way to take steps in order to bring about or to rekindle their historic cooperation,” said Kerry at the news conference on March 1 in Ankara. “I think that’s possible, but obviously we have to get beyond the kind of rhetoric that we’ve just seen recently [in Vienna].”

Stating that “Turkey has always defended the very rightful and just solution between the two states [Israel and Palestine] based on the 1967 Agreement,” Davutoglu put the blame directly on Israel. "If Israel wants to hear constructive remarks from Ankara, it needs to check its actions first toward us, and toward the settlements at the West Bank as well as to the people living in the region." He went on to say: "Don't forget that Israeli officials had been welcomed in the best way possible until their attack on Gaza and the Mavi Marmara incident. Turkey had done its best to make peace between Israel and Syria. We showed great effort to make peace between Israel and Palestine. And we're ready to do so again."

Yet as Erdogan has unequivocally sided with Hamas, and has not criticized its violence against Israel even once, it’s important to pay attention to a recent interview published at Al-Monitor, which makes it clear that Hamas “has not and will not recognize Israel no matter the costs.”

Turks on the street may not be aware of the ideological background of the Turkish Prime Minister’s remarks on Zionism, but assume that Erdogan himself did not know he would be misleading. Erdogan considers Hamas a Palestinian resistance movement fighting against the Israeli occupation for the right reasons; he does not consider it a terrorist organization. He recently met with Hamas’ political bureau chief Khaled Meshaal in Ankara on Feb.19th. Meshaal was an honored guest in October 2012 at the Justice and Development Party’s National Congress, where he received a standing ovation from the attendees. Erdogan publicly made it very clear that his heart was joining Meshaal in his first visit to Gaza in December to mark Hamas’ 25th anniversary. Based on the public statements, there is no justification to suggest that Erdogan will put pressure on Hamas to alter its decision and recognize the state of Israel.

Again, in that context, Erdogan is closer to Meshaal then he is to Kerry. His was not an unfortunate flip-flop; he actually believes Zionism is a crime against humanity and therefore challenges the legitimacy of the Jewish people’s right to establish their own state on the land that is called Israel. Criticizing the policies of Israel is different than equating Zionism to crime against humanity. All in all, peace can and should primarily be achieved between people, not states. For this to happen, there needs to be mutual respect and empathy toward Israel’s security concerns. And this makes it even sadder that Erdogan seems to have conveniently forgotten that in 1992, Turkey was a signatory to U.N. decision that revoked a 1975 resolution equating Zionism to racism.

Therefore, there is no reason to expect any kind of breakthrough to normalize the relationship between Turkey and Israel, which has stalled since the Mavi Marmara incident. It's not the lack of an Israeli apology for the deaths of nine Turks on that flotilla off the coast of Gaza in May 2010 that prevents the resumption of the relationship; the Erdogan government's overall policy of enmity and humiliation, which is rooted in Islamist ideology, stands as a clear obstacle as well. Israeli officials would say that this policy of humiliation was evident even before the Mavi Marmara incident.

“We have never been hostile against a nation, against a state, against an individual. However, if we need to speak about a very hostile practice, I would refer you to the killing of nine civilians on open waters,” Davutoglu said at the news conference. “[The Mavi Marmara incident] is a hostile attitude vis-a-vis Israel.” No doubt the death of Turkish citizens needs to be addressed in full, as there could have been other ways to prevent shedding of blood. But this event occurred in May 2010, and since then there have been attempts to reconcile, to no avail so far.

For example, just two weeks ago it was reported that Israeli National Security Adviser Yaakov Amidror met with Feridun Sinirlioglu, undersecretary of Turkish foreign affairs, in Rome to find a way to mend the relations. If Turkey is sincere in receiving an apology, it also has the responsibility to help create an atmosphere for Israel to deliver one, and in that context it also needs to convey a signal that there will be an end to this never-ending badmouthing about Israel. Who can say today that the Erdogan government sees any interest in normalizing relations with Israel?

Erdogan may be raising a good point when he claims Islamophobia is a "crime against humanity." Yet he fails to address the crimes, the brutalities, the works of evil done — all in the name of Allah — by the radical, extremist Islamists, and the fear that they have been placing in the hearts of the majority of the world's population, including Muslims. The Muslim world needs to give the issue of radicalism or extremism equal time, while objecting to those who equate Islam with violence.

The world’s leadership needs to build a common understanding on certain key issues that threaten the security and peace of the global community. U.N. Secretary-General Ban Ki-moon’s response to Erdogan called attention to the importance of the words uttered by leaders, and their impact on the people. "The Secretary General believes it is unfortunate that such hurtful and divisive comments were uttered at a meeting being held under the theme of responsible leadership," Ban Ki Moon's spokesperson said in a written statement. "The secretary-general heard the prime minister's speech through an interpreter. If the comment about Zionism was interpreted correctly, then it was not only wrong but contradicts the very principles on which the Alliance of Civilizations is based."

Israeli Prime Minister Benjamin Netanyahu also condemned Erdogan’s remarks. "I strongly condemn the comparison that the Turkish prime minister drew between Zionism and Nazism,” Netanyahu said. “I had thought that such dark and libelous comments were a thing of the past."

For the first time, the leadership of the Western countries is responding directly to Erdogan's libelous statements. In the words of a senior U.S. official, equating Zionism with crimes against humanity is "particularly offensive" and has a "corrosive effect," on U.S.-Turkish relations.

While it was expected that Kerry's visit would be crucial in determining how Turkey and the United States might cooperate to bring an end to the Syrian crisis, all policymakers need to think hard about what it means, in Kerry’s words, “to promote a spirit of tolerance, and that includes all of the public statements by all leaders.”