Shlomi Eldar offers a reminder of the Armenian genocide in asserting that accusations against Zionism by Turkish Prime Minister Recep Tayyip Erdogan exhibit hatred and hypocrisy. 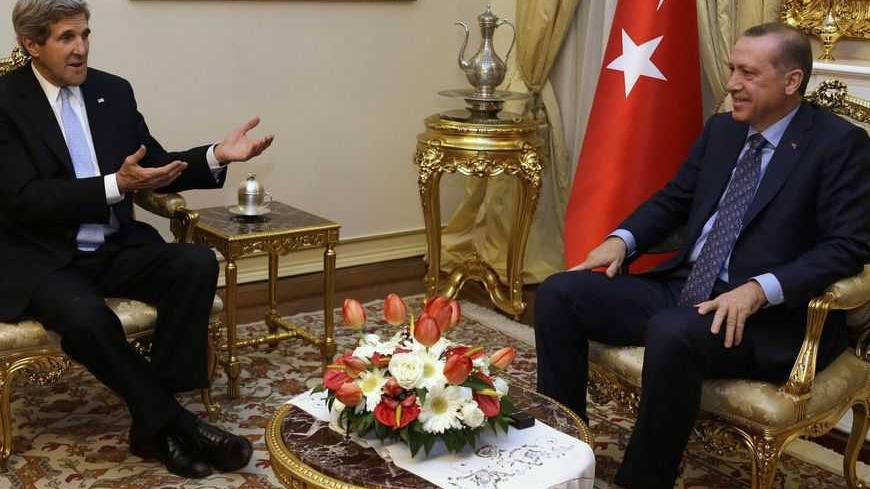 “Turkey and Israel are both vital allies of the United States. We want to see them work together in order to be able to go beyond the rhetoric and begin to take concrete steps to change this relationship,” said new U.S. Secretary of State John Kerry at a news  conference in Ankara on Friday [March 1]. Kerry also condemned Turkish Prime Minister Recep Tayyip Erdogan for his verbal attack two days earlier, when he compared Zionism to fascism and called it a “crime against humanity.” These two sentences by Kerry express the vast distance between hope for rehabilitating the relations with Ankara — and reality.

In the past, I had thought that it would be possible for Israel and Turkey to consider their joint interests and restore their relationship in the near future. The leaders of the two countries, I had reckoned, would be forced to swallow their pride, if only out of Middle Eastern logic. After all, friends are friends, all hell broke loose in the Middle East and this is the time to make up and bury the hatchet.

But then along came Erdogan’s statement this week in the United Nations ­— which was uttered, by the way, at a U.N. forum, established to “improve understanding and cooperative relations among nations and peoples across cultures and religions.” This statement certainly proved how far off the mark I had been.

Erdogan is a serial troublemaker. Two-and-a-half years ago he quarreled with Israel over the Marmara episode; a year ago he quarreled with France; and over the past year he quarreled with Damascus, almost to threat of war. If we can rely on commentaries and evaluations of the situation, Erdogan’s crass verbal exchanges with his old friend Syria is meant to help ingratiate him with Cairo, Tehran, Baghdad, Qatar and in effect the entire Arab world, in order to actualize his megalomaniac aspirations to become the Mukhtar of the Muslim world.

I believed that one day, Erdogan would understand that he could fill the tremendous void left by the leaders of the Arab world that were deposed or weakened – and diplomatic wisdom would dictate to him to soften his position vis-a-vis Israel.

This “path of wisdom” seemed tangible, attainable, logical and even self-evident to me. True, no one believes that a new friendship between the two countries could reemerge; a relationship as close and courageous as in the past. But even a cold friendship could be useful. These hopes/assessments were strengthened when I’d occasionally hear leaks about secret contacts between Israeli and Turkish representatives regarding an end to the crisis. We even received news recently in the Turkish press that Israel supplied Turkey with advanced electronic warfare systems for aircraft systems, that significantly upgrade the Turkish Air Force’s Airborne Warning and Control System (AWACS). This happened last month.

So, I asked myself, if that’s not a sign portending well for the future, if that doesn’t bode well, how else can we explain it? Two countries that were friends and became enemies are now taking confident steps toward reconciliation.

But then Erdogan rose to the speaker’s rostrum at the U.N. Alliance of Civilizations in Vienna, leaving his listeners in shock and causing me to feel baffled with myself over my naiveté. “The international community should consider Islamophobia a crime against humanity like Zionism or anti-Semitism or fascism,” said Erdogan at the stand of the startled U.N. Secretary-General Ban Ki-moon.

“Crime against humanity,” he said.

That is the moment when the penny dropped. Erdogan’s conduct vis-à-vis Israel is not a reaction or a result of anything. It has no connection to diplomatic mishaps or to the failures connected to the tragic takeover of the Mavi Marmara ship. It is not connected to the various operations of the IDF in the Gaza Strip; it’s not even about Erdogan’s megalomaniac aspirations to lead the Muslim world, for which he is willing to sacrifice the long-standing friendship between Turkey and Israel. It’s not about the impasse in negotiations between Israel and [Palestinian Chairman] Abu Mazen and not even connected to the ridiculous conduct of former Deputy Foreign Minister Danny Ayalon, who subjected Turkey’s ambassador to Israel to the humiliating ceremony of placing him on a low seat.

Erdogan simply hates Israel. If we listen carefully to his words at the Vienna convention, we realize that he doesn’t even try to hide it. He simply hates the Israelis and everything they represent with such deep, built-in, dark hatred that nothing will help. We should have understood this a long time ago, but better late than never.

“Obviously, we not only disagree with it. We found it objectionable. We denounce Erdogan’s statement,” Kerry said at that same press conference in Ankara during the weekend [March 1], and it was good that he said what he did.

Turkish Foreign Minister Ahmet Davutoglu, who also recently expressed opinions similar to those of the prime minister, fixed his gaze on Kerry without batting an eyelash.

And since Erdogan started all this, since he was the one to hurl the “crime against humanity” hot potato, the time has come for us to turn the history-book pages and consider an item that all Turkish leaders in the past attempted to hush up, and even forced those surrounding them to deny. Again, I raise the subject here with the requisite caution, only because Erdogan himself felt free to run off at the mouth. I am referring to something that can only be labeled a “crime against humanity,” meaning genocide, that Turkey was connected to. Does this sound familiar to anyone?

A few months ago, I visited Armenia. I went on a tour of the genocide museum in Yerevan, the capital city. A million and a half Armenians were murdered in what is called the “Armenian Genocide” that was carried out during World War I in the Ottoman Empire period, before the founding of the modern Turkish state. The museum is located in the heart of the capital city, longingly overlooking the Ararat Mountain that is holy to the Armenians but located in Turkish territory. The museum is full of appalling testimonies and photographs that clearly answer to the description of “crime against humanity.”

Despite the tremendous efforts invested by Turkey in the last hundred years to prevent this, dozens of democratic countries in the world have acknowledged the Armenian genocide. Dozens of countries — bur not Israel, which has avoided recognizing the genocide for years, when relations with Turkey were close and even after the crisis with Turkey erupted. It seems that some small spark of hope for repairing the relations between the countries, prevented Israel from officially acknowledging the genocide of the Armenian nation.

I have no intentions of settling accounts with the Turkish nation, or pouring more oil on the fire of the ongoing conflict. But to throw out into the air that “Zionism is a crime against humanity” and continue to deny the Armenian genocide — that's impossible.

So Erdogan, with your permission, one friendly piece of advice: The one who searches for justice must come with his hands clean. Otherwise, his search might wake up undesirable ghosts from the past — ghosts that you have tried to keep dormant.