Turkey and Israel Determined To Leave 'Mavi Marmara' Behind

While Turkey and Israel are determined to put the 'Mavi Marmara' incident behind them, true normalization is years away and not at all guaranteed, writes Tulin Daloglu. 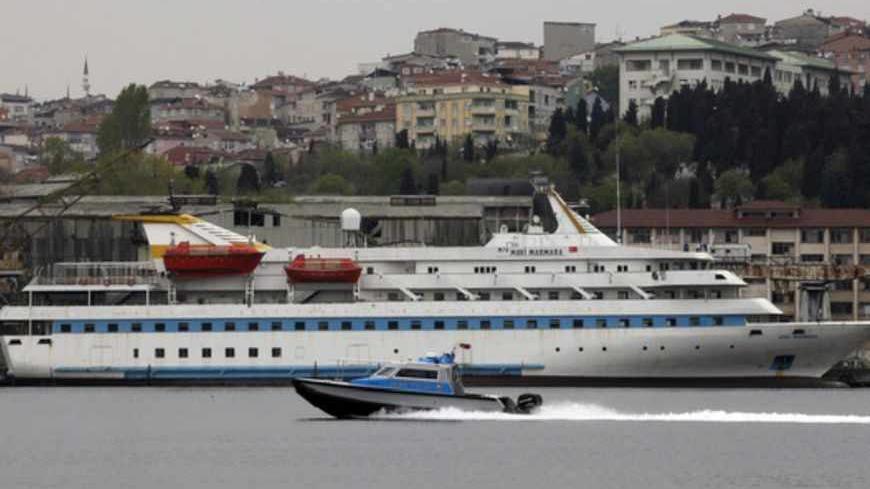 The Turkish-owned cruise liner Mavi Marmara is seen under maintenance at a shipyard in Istanbul April 21, 2013. - REUTERS/Murad Sezer

Will Israel's March 22 apology and the April 22 start of compensation negotiations for the deaths of nine Turks aboard the Mavi Marmara affect Turkish Prime Minister Recep Tayyip Erdogan’s approach to the Middle East?

First of all, while Turkey and Israel appear determined to put the Mavi Marmara incident behind them, it will take years to see a normalization of relations, and there is no guarantee that the two sides will ever trust one other like they used to. The fact of the matter is that although Turkey had set an apology from Israel as a precondition for reestablishing full relations, the Erdogan government had an already established mindset about relations with Israel even before the incident. The Justice and Development Party (AKP) government has been fiercely critical of the previous Turkish governments for their close military and diplomatic cooperation with Israel, while also accusing them of turning their backs to and looking down on the Arab states.

“We wanted to erase the stereotype in the public that nothing good comes out of dealing with the Arabs,” a Turkish Foreign Ministry official told Al-Monitor. He was referring to the long-held psychological baggage of Turks, as the "legitimate inheritors" of the Ottoman Empire, having lost a massive amount of its land by the end of World War I, with the Arabs having "stabbed them in the back" by siding with their enemies.

“Trying to overcome these stereotypes and clichés also has been an important component of our [foreign] minister Ahmet Davutoglu’s policy. The 'zero problems with our neighbors' has been shaped with these thoughts in mind.”

While the Foreign Ministry suggests that Davutoglu’s 'zero problems with neighbors' policy is still intact, as Turkey has extended its sphere of influence in the region, Ankara has stood on the right side of history by putting morality and justice at the core of its policies and therefore sided with the people when dealing with crises like  Syria. In that light, Turkish diplomatic sources sound confident that Turkey’s standing in the region is stronger than ever. There is also a perception that Turkey has taken all the right steps in developing preventive policies to help the people of the region, such as when Erdogan asked Syria for democratic reforms long before the bloody two-year uprising began.

That may not, however, be the only interpretation of these developments. There is also the possibility that Turkey has only been opportunistic — not that there's anything wrong with that — in riding the waves of change domestically and in the Arabian Peninsula since the AKP came to power in 2002, but it is difficult to conclude that Erdogan had the right policies all along to address the challenges of the Middle East. As a quick reminder, Erdogan defended the status quo in the Arab region and never questioned the autocratic leaderships there until the revolutionary developments in the region erupted. Turkey and Syria held a joint cabinet meeting in October 2009, which Assad likely perceived as an honor and full trust in his leadership. Erdogan also received a human rights award in December 2010 from the deposed Libyan leader Moammar Gadhafi. One can only assume that Erdogan was well aware of Gadhafi’s spotty record on human rights, but simply did not mind, despite all his rhetoric on the importance of morality and ethical values.

Moreover, Erdogan never once joined the public discussion before the Arab Spring about the grave misconduct, corruption, bribery, tribalism, women’s rights issues, unemployment, and other concerns in these countries. He did, however, make the Palestinian issue a vehicle for entering into the complex world of Arab politics, using Israel as a whipping boy like so many ousted Arab leaders have done for decades while covering up their wrongdoings.

“Our vision for justice, international order and human rights will not be achieved until the moment we actually see the flag of the State of Palestine standing side by side with ours, as a full member of the United Nations,” Davutoglu said in November 2012 at the UN General Assembly meeting that recognized Palestine as a non-member observer state. Interestingly, Palestinian recognition brought with it the first public split between Hamas and the Erdogan government. Hamas’ leadership was against going to the United Nations, as they repeatedly said that they do not recognize the existence of Israel within even the 1967 borders. Israel’s six days of air strikes into Gaza in response to Hamas firing rockets into Israel overshadowed this difference between Ankara and Hamas. Davutoglu paid a visit to Gaza in November 2012 with the secretary-general of the Arab League and the twelve foreign ministers of the Arab states to show solidarity with the Palestinians. The Turkish foreign minister broke into tears during the visit, saying, “Keep in mind that the conscience of humanity and history will never accept this atrocity. The Arab world, the Islamic world and Turkey will stand shoulder to shoulder against Israeli atrocities.”

The Erdogan government also understood at the same time that there would be no way for it to play a role in the peace process between Israelis and Palestinians if it could not directly engage with Israel's political leadership. Thus Ankara concluded that it also needed to reactivate its broken relations with Israel after the Mavi Marmara incident. Still, the Erdogan government does not seem to be in a rush to send an ambassador to Tel Aviv. Turkey withdrew its ambassador from Israel immediately after the Mavi Marmara episode, and Israel has not replaced its outgoing ambassador in Ankara, absent since September 2011. Both countries lowered their representation to the second-secretary level.

The Israelis are signaling that they will exchange ambassadors with Ankara when Turkey does so, but there is already speculation as to who will be the next Israeli ambassador. The Israelis seem to think that they need to extend an apology to clear up the bad blood with the Turks and prevent them from moving further into the camp in the fight against Israel. They must have believed that the renewal of ties with Ankara could create opportunities to discuss their concerns about potential spillover from the Syrian crisis, and what they can do together about it. After the controversial news about the Assad regime’s use of chemical weapons was reported, it became clear once again that these former allies still do not see eye to eye, even on Syria.

Turkish diplomatic sources are expressing the need for the utmost caution before foreign military intervention in Syria, whereas Israel is demanding that the United States take targeted action as quickly as possible, before Syria's chemical weapons fall into the wrong hands. While Ankara does not percieve an imminent threat of chemical weapons being used against Turkey, Israeli leaders are seriously concerned about them ending up in the stockpiles of Hezbollah or Hamas. They stress, however, that they are not asking the Obama administration to go to war with Syria. "We never asked, nor did we encourage, the United States to take military action in Syria," said Yuval Steinitz, Israeli minister of strategic and intelligence affairs on international relations, on April 28 in New York at an annual conference sponsored by the Jerusalem Post.

Meanwhile, politicians on both sides are determined to successfully end the compensation negotiations and move on to a new chapter in their relations. On April 22, Prime Minister Benjamin Netanyahu sent a two-person delegation, headed by his national security adviser, Yaakov Amidror, to start the process. Turkish Deputy Prime Minister Bulent Arinc said that the meeting had been “positive.” He went on to say, “The sides discussed the methods and principles to be used while calculating the compensation, and they determined the parameters.” An Israeli diplomatic source who spoke with Al-Monitor concurred with Arinc's assessment.

“This is a very important relationship for us,” the Israeli source told Al-Monitor, dismissing any concerns about the substance of the talks or what they think about the comments coming out of Ankara, adding, “We’re not paying attention to anything said outside the conversation taking place between both sides behind closed doors.”

In fact, this is the first time in a long time that both sides are paying attention to what they say to the media, which suggests a political decision to successfully conclude the compensation talks. But even then, the new Israeli-Turkish relationship will not be a friendly and hospitable one. Turkish government officials and military personnel, for example, were no-shows on April 25 at the Israeli Independence Day reception. A diplomat of non-ambassadorial rank from the protocol department represented the Turkish Foreign Ministry, and a few deputies from the main opposition party, the Republican People’s Party, attended.

A Turkish diplomatic source told Al-Monitor that the media should refrain from attributing any meaning to their absence because the compensation negotiations are ongoing. “It was important for us that Israel extend an apology and lift the Gaza sanctions. It may be that not all sanctions are lifted, but there is significant improvement in the situation. So we consider the situation ripe enough for us to take steps for normalizing our relations and bring this issue to closure.”

The same diplomatic source also said, “Once we close the deal with Israel, it will be up to the Turkish courts to decide whether they can still move ahead with the trials by law,” referring to the possibily of prosecuting, in absentia, the top Israeli military commanders accused of being responsible for the deaths of the nine Turks on the Mavi Marmara. The families of those killed on Mavi Marmara are threatening to file new charges against Israel.

While there is no announcement yet as to when or where the Israeli and Turkish teams will sit down for a second round of compensation talks, it will be a big surprise if these negotiations do not end in success. Even if Israel settles this matter with Turkey, it is likely to still face problems with international courts.

The New York Times, for example, published an interesting letter to the editor on April 25. In it, John Quigley Columbus, a law professor at the Moritz College of Law at Ohio State University, takes exception to the Mavi Marmara flying the flag of Comoros, not Turkey, when the Israeli commandos raided it.

“The fact of Comoros registration opens up an additional avenue of recourse, whether or not compensation is arranged,” Quigley Columbus wrote. “The International Criminal Court has jurisdiction over acts committed on board a vessel flagged in a state that is party to the court’s statute. Turkey is not a party, but Comoros is. So the killings potentially fall within the court’s jurisdiction as war crimes, which would not be true had the Mavi Marmara been Turkish-flagged."

In other words, even if the sides successfully conclude their negotiations on the issue, the legal dimensions of the Mavi Marmara incident may not see closure at the same time.