Worried about corruption investigations and intent on holding on to power, Turkish President Recep Tayyip Erdogan is setting up a shadow government. 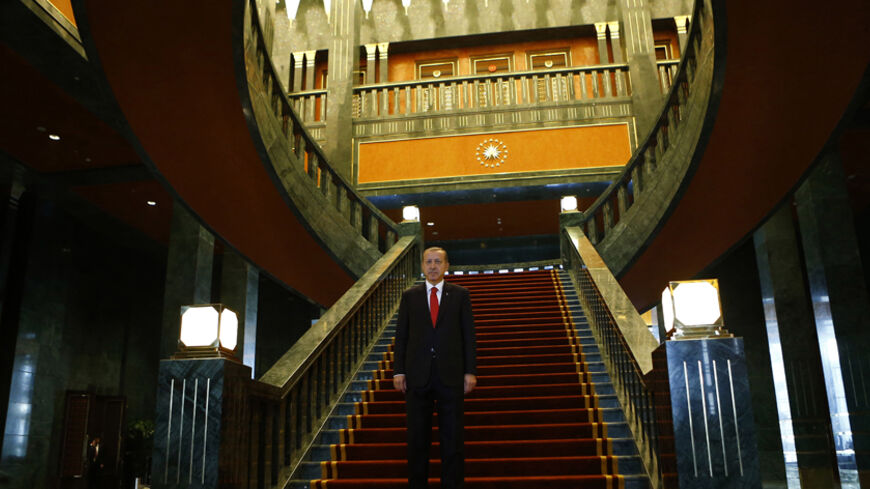 Power and fear are the two words that are used most by those keeping track of President Recep Tayyip Erdogan’s political saga. It is his fear that the corruption and graft accusations will in the end implicate him and his determination to hold on to power as the new president. That is what is motivating him to constantly maneuver to preserve his power over the government and the parliament. Setting up a shadow government is one such method he has come up with.

He has increased the number of substantial directorates of the presidency from four to 13. New units include internal security, foreign relations, economy, defense, energy and investment monitoring. Previously there were only the directorates of administrative and financial affairs, institutional communications, information technology and human resources. The president, whose main function was to approve draft bills, used to sit around the table with his advisers and ask for their opinions.

Erdogan made the changes not through a usual procedural arrangement, but by resorting to a confidential decree. Article 107 of the current 1982 Constitution allows the president to manage the “General Secretariat of the Presidency.” This revision decree, which was not subject to judicial approval, was issued at a time when there was a heated debate raging on how the 1,150 rooms of the White Palace would be used. The new system crafted by Erdogan will function as a “big brother” and the Cabinet ministers will feel the presidency looking over their shoulders.

According to a report in the daily Hurriyet, Erdogan, with the Directorate of Internal Security, will monitor the fight against the members of the Fethullah Gulen faith community who have penetrated the state ranks and follow up the peace process with the Kurds.

With the Foreign Relations Directorate, Erdogan will keep tabs on foreign policy. This department will be under Deputy Secretary-General of the Presidency Ibrahim Kalin.

The Economy Directorate will keep an eye on the economy, while the Defense Directorate will be responsible for defense affairs, defense contracts and military issues. The Energy Directorate will be busy with mines, energy issues, oil and natural gas pipelines. The Investment Monitoring Directorate will focus on Erdogan’s favorite projects, such as bridges, roads and airports. All departments will monitor the work of the respective Cabinet ministries and report to the president.

Is it monitoring or a parallel administration?

There are serious concerns that the work of the directorates will go beyond monitoring and become intervention in planning, project formulation and implementation phases. Even today Erdogan does not hesitate to intervene in the work of ministers. He calls on members of the parliament to inquire about the progress of projects in their constituencies. Erdogan’s already established methods of work signal that the new directorates within his General Secretariat will function as a “shadow government” or even as “parallel cabinet.”

Presidential adviser Binali Yildirim declared that after 2015, when necessary, Erdogan will chair the Council of Ministers. That was seen as yet another indication of Erdogan’s determination to be fully involved and supervise the ministers.

A source who is closely following the situation in Ankara made the following assessment for Al-Monitor: “Erdogan wants to stay seized with issues he was dealing with as the prime minister. He has already said that the president is also the head of the executive. Now he wants to make sure everybody understands this with the new mechanism he is setting up. He wants to institutionalize his intervention with the way government operates. In a way, he is preparing the infrastructure of an executive presidential system. What he is doing is neither legal nor illegal. By making use of the legal defects of the 1982 Constitution, he is restructuring the presidency. Since he is not going to the parliament to ask for authorization for new personnel for the presidency, most likely he will obtain the personnel he wants through temporary assignments from other state bodies.’’

When I asked if Prime Minister Ahmet Davutoglu and his ministers won’t be unhappy with the shadow cabinet and its interference in their work, my source replied: “Of course they won’t like it. The Cabinet is already feeling uncomfortable not knowing who their interlocutors are and who they have to consult when making decisions. If the prime minister had been an independent person or from a non-AKP [Justice and Development] party, we would definitely have a crisis brewing. Even if the former President Abdullah Gul had been the prime minister there would have been problems. There appears to be no serious problem now, because Davutoglu is not openly challenging. But this silence may be disrupted during the process of preparing the party candidate lists for the 2015 general elections. If President Erdogan takes over the preparation of the lists instead of Davutoglu, as the chairman of the AKP, then there will be problems.’’

In the first 100 days of his presidency, Erdogan has been hurrying from this meeting to that meeting, from this ceremony to the other. While his predecessor Gul did not attend more than 20 ceremonies or conferences during his entire tenure at the presidency, Erdogan sometimes attends two or three diverse occasions in a day.

In the old days, the presidency used to be criticized for being a legally “nonresponsible office.” Presidents could easily evade such criticism by stating that the president is a neutral and independent representative of the nation. But Erdogan, by assuming the power of the executive, by speaking on behalf of his party and the government, has lost any claim to neutrality, independence or being a representative of the entire nation.