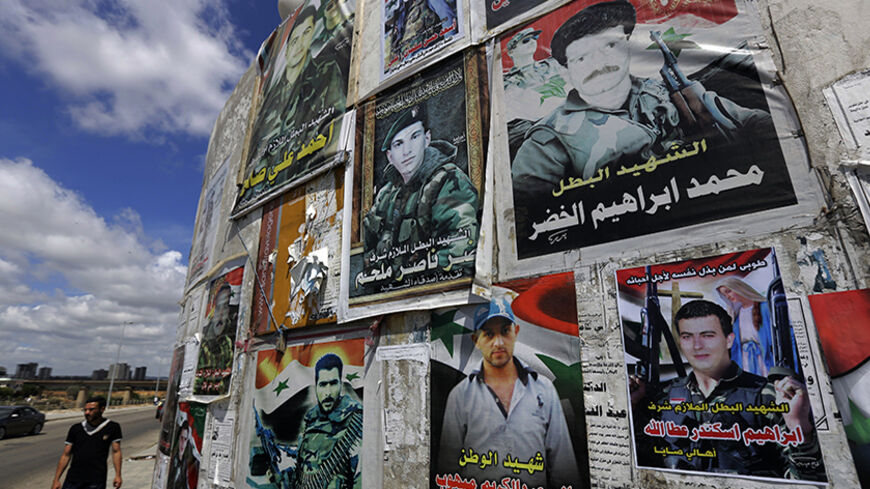 A Syrian man walks past a wall bearing the portraits of soldiers from the city of Tartus who died during the Syrian conflict, in the city northwest of Damascus, May 18, 2014. - AFP/Getty Images/Joseph Eid

A correspondent in Damascus
December 22, 2014

TARTUS, Syria — Despite the bloody battles across Syria, many young men residing in regime-controlled regions have managed to escape military service for the last three years. But in early November, the Syrian authorities implemented new measures that have made evasion almost impossible unless the young men leave the country — no easy option, either.

Syrian authorities are on the hunt for draft dodgers, deploying across regime-held areas and raiding public places. "Mohammad" (a pseudonym), 33, is afraid of wandering the streets of Tartus after the tough first few weeks of November.

He said, “The military police were deployed across the city and started raiding public cafes, workshops in the industrial region and the houses of some young men who were called to report to service. The checkpoint officers confiscated the IDs of men in public transportation vehicles, as their names were on the list of those who were called up for duty in the military reserve force. I should have reported to the military reserve force over a year ago, but before these measures were taken, I was leading a normal life.

“At first, I thought that people were exaggerating and that these were just rumors. But one of my friends told me that he saw military policemen carrying a laptop and raiding a small cafe in the city. Then, they closed the doors and collected the IDs of all the men in there. The police dragged three young men off, as their names matched those on the laptop, after allowing them to make only one phone call to their families,” Mohammad added.

Nothing like this had ever happened before in Tartus, and soon the pursuit of the young men seemed to slacken. Mohammad said, “It is true that they stopped the raids as of mid-November, but the scrutiny at checkpoints in the city and outside of it persists. Besides, they could resume the raids any minute, and the situation has become quite scary.”

When Al-Monitor's correspondent journeyed to a village in the eastern Tartus countryside, the minibus had to pass through several security checkpoints. At one of them, the military police asked for IDs and military service cards from all the passengers.

One 19-year-old rider did not have his military service card on him. Although he assured the policemen that his service had been delayed for school, they detained him, waiting for a relative to bring the card to prove his claim.

The bus continued to the village and left the boy behind, his eyes filled with tears. He knew that if he failed to prove that his military service had been deferred, he might have to report to duty immediately.

In the village, Al-Monitor met a man who had evaded conscription. He asked that his name and village name be kept confidential for security reasons.

He said, “I have been pursued for several months, and I couldn’t leave the country. I probably won’t be able to before the war ends. In the past, it was enough to stay in the province and keep a low profile. Today, I can’t even leave the village. I always keep an eye on the sand road leading to our house, for fear of the military police’s raids. I don’t know what to do.”

Asked why military police were checking for military service cards when they had the names of those evading conscription, he said, “The names of those evading conscription are not made public immediately, as some necessary measures take several months. Therefore, the military police ask for the service cards, on which are written the service delay expiration dates. They dragged a man from a checkpoint to report to duty immediately after seeing his card, which showed that a week had passed since the last delay date,” the man answered.

The mountainous environment, abundant with trees, helps the men evade detection and hide from raids. Nevertheless, life has become quite tough for the draftees. “I am besieged in my own village, and I might even be besieged in my own house. In the end, I might voluntarily enroll in the service, since my family won’t be able to support me financially for long,” the man said.

Men who have already served but are still under the age of 42 — the age limit for the reserve forces — are also afraid. Usually, a notification is delivered to the person’s house, informing him of the need to enroll in the military reserve force within a certain period — and giving him time to hide or flee the country. But not always.

Another 33-year-old villager who works in a small garden adjacent to his house said on condition of anonymity, “I completed my conscription service nine years ago, and I was certain that I would be informed beforehand if I had to report to the military reserve force. But to my surprise, one of my friends was arrested at a checkpoint and sent to the frontlines. He was allegedly wanted for the military reserve force, but he was never notified. For that reason, I try to avoid checkpoints as much as possible, although I am not on the wanted list yet.”

Tartus is not the only province afflicted by this situation, as similar measures are being implemented in Damascus, Latakia and other regions where the Syrian regime has tightened its grip. Leaving the country has become extremely difficult, as many countries have made it tough for Syrians to gain entry visas. Last summer, the Lebanese government took several measures hindering displaced Syrians' entry to Lebanon. Ferries from Tartus to the Turkish port city of Mersin were also stopped.. As a result, most Syrian men who do not have the money or contacts abroad to make escape possible are finding themselves stuck, waiting their turn to report for duty on the frontlines and face death.