The Syrian army is continuing to conscript recruits for compulsory military service, but young men, including supporters of the regime, are avoiding conscription at the risk of arrest and imprisonment. 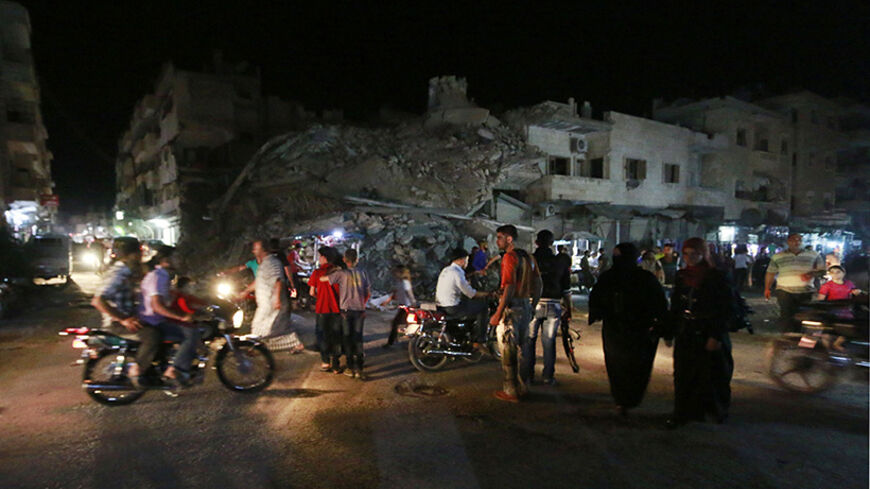 People walk past damaged buildings as they shop on the eve of Eid al-Fitr in Idlib countryside, July 27, 2014. - REUTERS/Nour Kelze

TARTUS, Syria — Through its steadfast agencies and institutions, the Syrian regime remains relentless in the areas it controls. On the Syrian coast, and in large swaths of Homs, Hama, Damascus and Suwayda, pro- as well as anti-regime residents are equally living according to the laws and regulations imposed by the Syrian regime. All men are required to fulfill compulsory military service or join military reserve forces. In addition to oppositionists who refuse to fight with the regime because of their political sympathies, there are hundreds of neutral or pro-regime citizens who do not wish to take part in the fighting.

Many of those summoned by the army to fulfill military service have left the regime-controlled areas for the areas held by rebel armed factions, some of whom join the factions while others live away from the fighting. A significant number of “draft dodgers” have also left the country for good, while some continue to live in regime-controlled areas either because they could not leave the country or didn’t want to leave. Despite the overwhelming risks draft dodgers take, in fear of being arrested or taken by force by the army, their living in regime-held areas has yet to become intolerable.

In a small village in the mountains of the Syrian coast, 30-year-old Mohammad (a pseudonym) lives in a small grove adjacent to his place, even though he was summoned to reserve military service a year and a half ago. He spends the majority of his time farming, or working in a workshop nearby.

Mohammad says he does not want to “go to death.” This is why he refused to join the military service. “Military police have not tried to take me by force until now, and I will not allow them [to do so]. I do not support the regime or the Islamist Sunnis and I will not take part in the fighting,” he declared.

But how does Mohammad move and travel from one place to another despite the widespread military and security checkpoints? “I am not sure if my name has been circulated on the checkpoints. However, they rarely ask for my identity card for scrutiny, maybe because I come from a known Alawite-dominated village, whose residents support the Syrian government.”

Things are easier for those summoned to fulfill reserve military service if their names are not circulated at checkpoints. Yet, the situation is much harder for those wanted for compulsory military service. Khaled (also a pseudonym), 28, told Al-Monitor that he finished his university studies two years ago and was supposed to complete compulsory service.

“I did not join because I did not want to fight with the army of the dictator Bashar al-Assad,” he said. Khaled lives in a humble house in a regime-controlled suburb of Damascus, and works for a small company. He tries as much as possible to limit his movement.

Sadness is visible on Khaled’s face, for he has not visited his village on the Syrian coast for two years. If he went, he would be arrested and would have to do military service. Fear clearly cripples Khaled every time a military car comes near him. Yet, he refuses to leave the country, saying, “I was offered to illegally leave through the Lebanese borders, but I refused. I will not leave the country and I prefer to live the suffering and fear with the people of my country. I will not take up arms against any party, come what may.”

Syrian authorities do not issue any figures or statistics on the number of people dodging military service, and prohibit any institution and independent body from reporting these types of statistics. This explains why there are no public leaks about this matter, with the exception of one media report, which said in January that it had obtained documents revealing that 5,000 men from Tartus failed to report for military service, knowing that not all of them were against Assad.

One who evaded compulsory service agreed to talk to Al-Monitor on condition of anonymity, “I am not a supporter of the opposition. I hope that the regime will win. But I do not want to take part in war and death. This is it. I have my own methods that I cannot reveal how I avoid arrest and being taken to the war.” His dress sense gives the impression that he may hail from a wealthy family. Despite this, the source said, “I cannot always be reassured. I may leave the country at any time.”

Corruption may be an avenue to avoid military service, but this is not an option for those who cannot leave the country due to their economic situation and inability to travel.

A man from Tartus who also requested anonymity said, “I was summoned a year and a half ago to fulfill reserve military service, but I did not join. Back then I thought that the war would not last for long and that the Syrian regime would win shortly. I was reassured at first, because the military police did not raid my house and I did not feel it was dangerous to move or travel. However, authorities started a crackdown and a number of my friends were arrested at checkpoints. Life was possible. But, the margin of movement and life has become narrower, and I have no idea where to go at the end.”

His face is marked with fear. “I do not oppose the regime,” he said, “But I do not trust it either. I believe that I will definitely die in the war. Traveling is impossible because a small number of countries grant visas for Syrians. Additionally, there are no job opportunities in Lebanon or Turkey. All I have to do is travel to become a refugee. The life of refugees, however, is harsh and dreadful.”

Slowly, the margin of life for those who refuse to join the Syrian army is shrinking. What was possible a year ago has become less possible today. And what is still possible today may not be so in the future. Even if the regime-controlled areas are not witnessing battles and confrontations, the echoes of the war still resonate as hundreds of young men are taken to fight while others live in fear.