When eastern Aleppo fell to rebel factions, radical preachers from abroad quickly moved in and began proselytizing extremist views to the local population, raising fears that such effects may linger for years to come. 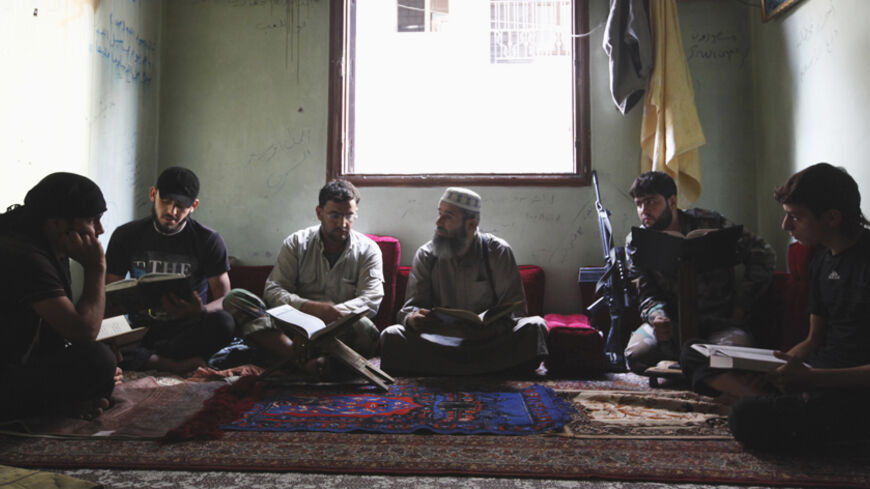 The war barged into Aleppo city rudely and was an uninvited guest, bringing with it not only death and suffering, but also the dangerous specter of extremist radicalization at the hands of the seasoned fanatics that started pouring into the city almost as soon as its eastern part fell to the rebellion. "There are no atheists in foxholes" and there are certainly none in cities brutally devastated by death and war, the perfect fertile ground for the unscrupulous to poison unsuspecting and helpless populations.

Before the battle of Aleppo in July 2012, I worked with a number of local aid groups that had been providing food and basics to the many displaced who had arrived in Aleppo from other war-ravaged areas in the country. This is when I first met Mahmoud, a gentle and soft-spoken opposition activist in his late 20s. He struck me as being knowledgeable about Islam as well as being moderate and accepting of other faiths.

I recently caught up with Mahmoud, and he recounted how radicalization first started seeping into Aleppan society. Himself a devout Muslim, he explained the allure those ultraradical preachers had. “They filled not only a spiritual gap that was there, but they manipulated the fears of the people. They promised them their fears would soon turn into joy in this world and the next if they followed their word. They glorified 'shahada' [martyrdom] and 'sabr' [patience while suffering] as the holiest and divinest of Islamic virtues, which is completely wrong,” he said.

Mahmoud described to me how one Friday shortly after the rebels took over many of Aleppo’s southern and eastern neighborhoods in the summer of 2012, foreign-looking armed militants joined the congregation in his local mosque in Sha’ar in full combat gear with their rifles. As the imam stood up to give the sermon, one of them rushed forward and took his place on the pulpit and started giving his own fiery sermon, much to everyone’s surprise and shock. He even took his rifle up with him. They had never seen anything like this in their lives, as previously all mosques were tightly regulated by the Syrian regime and sermons were scrutinized and vetted to weed out anything subversive or critical of the status quo.

“He started quoting from the Quran and hadiths, but imperfectly because he made mistakes about fighting the kufar [infidels] whom he said were the Syrian regime and those who supported it as well as the West,” Mahmoud said, adding: “The jihadist fighter, who spoke with an accent I thought was from the Arabian Gulf, then told us about how they are rebuilding the glory of the Islamic caliphate and that it would be the greatest one yet. He said, ‘I swear to you my brothers, I saw the banner of Islam on the White House in a 'ro’ya' (revelation), our victory is very near. It starts here in Bilad al-Sham [Greater Syria] and will spread the world over through our jihad. Which is why we call you to jihad, brothers, and it is demanded upon you by religion to join it.'”

Mahmoud said that after the long sermon was over, people were bemused. The older men seemed mortified and mostly unconvinced, but sensed that a new and far more extremist phase in their country’s civil war was about to unfold. But some young men were enthusiastic and taken by fervor, shouting "Allahu akbar" (God is great) after the gun-toting imam had stood down from the pulpit.

The local moderate rebel groups, including the powerful Liwa al-Tawhid Brigades, seemed unperturbed and uninterested in this startling new phenomenon. They did nothing to stop the jihadist preachers, even after some elders conveyed to them their fears about young men joining. "Let them join, we are all fighting on the same side," was the common response, according to Mahmoud.

The radicalization did not stop at the pulpit, Mahmoud explained, and the jihadists were later superseded by radical clerics — proper ideological holy men who were better versed in Islamic scripture, more coherent and more capable of convincing the skeptics and would-be recruits of their fanatical interpretation of Islam. Many of them were foreign, from all sorts of nationalities, some spoke with a thick foreign accent and clearly did not look Arab, and were possibly from the Caucasus.

This seemed to be quite an organized affair, as these clerics would set up shop in mosques after sundown prayers and ran special classes. All were welcome to attend, and those who did were given vouchers for aid and food was handed out by special distribution centers that had started to spring up across east Aleppo. They were attempting to win over the people and more fighters to their cause through a clever campaign of providing much-needed aid to the poorest of areas, and free classes mostly focusing on religious education, but also including basics such as Arabic reading, writing and grammar. The emphasis, however, was on Quran recital and there were monetary prizes for those who would memorize chapters by heart. This would be mixed with radicalization as there would always be stories glorifying the martyrs of global jihad, including the freedom fighters of Afghanistan and Iraq.

Mahmoud described to me his horror at what was going on. “I knew what they were doing, but I was helpless to stop it. We simply didn’t have the resources to take them on, they were well supplied and financed. We couldn’t provide all the aid they could, they must have spent millions.” This went on for quite a while until relations with the nascent Islamic State in Aleppo soured and internecine war broke out in January 2014. “Suddenly, those jihadists were now turning their guns on each other. They had shown their true face, they were not fighting the kufar, but each other. People saw this and began to be disgusted at their deception,” he said.

Unfortunately, this still did not convince those local recruits who had already joined, and instead they simply switched factions, most according to who their holy mentor followed. Many would become cannon fodder for the upcoming jihadist fratricide, as their grand aspiration of fighting and defeating the kufar was cynically twisted. But this also provided an opportunity for Mahmoud and people like him, who wanted to win back the souls of the believers from the extremists.

“As soon as this inter-rebel fighting broke out, people became disillusioned. ‘Why are Muslims killing each other?‘ they would ask. None of the answers the jihadists gave them were convincing. This is where I would try to explain to everyone I could, while working at the soup kitchens or aid centers, that those people were “daleen” [had lost their way] and their type of jihad was wrong as it distorted the values of our religion and made us seem like just savages and butchers. Thank God, I was successful of convincing many that they were wrong, and I felt happy that I was winning my people back," Mahmoud said.

What Mahmoud told me was a grim tale of radicalization in the chaos and turmoil of war and lays bare the real dangers Syria faces even if the war ends, but it also provides hope that there is a way to win back people from the brink.