Hamas activist Salah al-Arouri, previously expelled from Israel, found refuge in Turkey, where he managed to create a militant alternative to the movement’s splintered leadership. 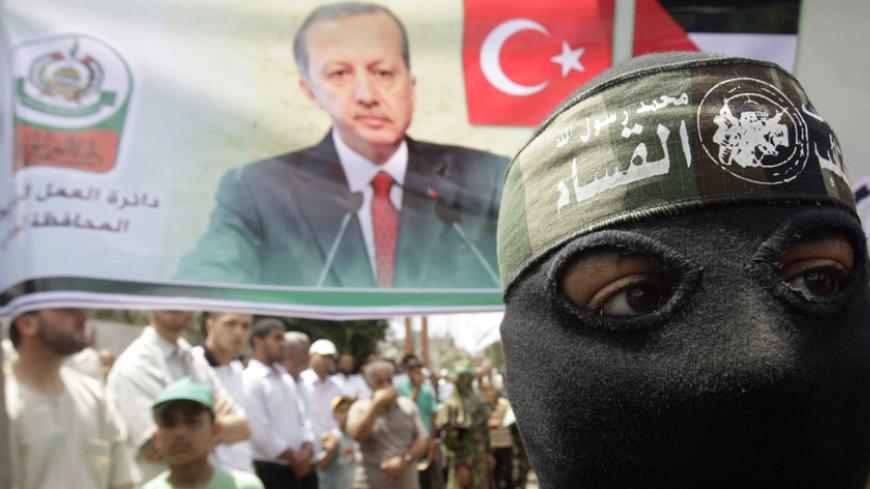 A masked member of Hamas stands in front of a banner depicting Turkey's Prime Minister Recep Tayyip Erdogan during a protest in the central Gaza Strip against Israel's interception of Gaza-bound ships, June 4, 2010. - REUTERS/Ibraheem Abu Mustafa

Hamas is a multi-headed movement whose power centers and modalities of influence were shaped and institutionalized by changing realities. Its power centers and decision-making apparatus moved from the Gaza Strip to the control of the Hamas political bureau abroad, following Israel’s pursuit of the movement’s heads and activists in the territories, and the leadership vacuum that was created as a result.

The internal power struggles that waged within the movement secured and institutionalized Hamas’ current well-known structure: the Gaza Strip leadership, the West Bank leadership, the leadership of the prisoners in Israeli prisons and also, over the years, Hamas' military wing in Gaza. The military wing has developed into an almost autonomous entity that makes crucial decisions on its own.

The relative weight of the political bureau as the movement’s supreme body — in addition to the Shura Council — was, and still is, due to the money raised by its members to fund Hamas’ activities. Its military wing in Gaza — as opposed to the political leadership — established its power and influence by virtue of the large quantity of weapons that flowed into the Gaza Strip under Hamas control.

This is how the movement operates and how it managed to survive the tremors and shocks it has undergone in the course of its 27 years. While the internal balance of power between the movement’s assorted heads has somewhat changed, the structure that was set over the years has been meticulously maintained.

Recently, another chief added himself to Hamas' leadership: Salah al-Arouri. Arouri amasses significant power within the familiar Hamas structure and even has substantive influence on the functioning of the movement — influence that bends Hamas leadership to his will. Based in Istanbul, Arouri tends to adopt autonomous characteristics similar to those of the Hamas military wing in the Gaza Strip.

Arouri, one of the founders of Hamas’ military wing in the West Bank, lived previously in Ramallah. In May 2007, he was arrested and jailed by the Israeli authorities, and in April 2010 he was expelled from the territories. Arouri asked to move to the Gaza Strip, but Israel preferred to expel him abroad, under the assumption that his presence in Gaza would endanger Israel.

However, Israel made a mistake. Arouri arrived in Damascus and became part of Hamas' political bureau there. When the movement’s leaders headed by Hamas leader Khaled Meshaal abandoned their Damascus bureau due to the Syrian civil war, Arouri went to Turkey where he founded an alternate political bureau. Since then, the Turkish branch under Arouri has amassed power and status due to the sympathetic stance of Turkish President Recep Tayyip Erdogan with regard to Hamas (considering this base that was founded in his country as a kind of Hamas embassy) and Arouri demonstrating a special talent for raising funds from various Islamic foundations in Turkey and throughout the world, to finance activities of his “bureau” and of Hamas in general.

In fact, Arouri’s current activities are reminiscent of Hamas Deputy Chairman Mousa Abu Marzouk’s fund-raising efforts in the 1990s — efforts that saved Hamas at least twice in that period from financial ruin. But while Abu Marzouk saw himself as a faithful soldier in Hamas’ service, Arouri created an independent power base that operates almost completely separate from Hamas’ main leadership.

Hamas' Turkey branch takes its own decisions without involving the Hamas leadership and without taking into account the ramifications of its actions on the movement as a whole.

The Turkish Hamas branch, for instance, was involved in the abduction and murder of the three youths — Naftali Frenkel, Gil-Ad Shaer and Eyal Yifrach — in June. The connection between the Qawasmeh clan and Arouri was disastrous as far as Hamas was concerned. Meshaal admitted that he had no prior information at all about the abduction, or that Hamas operatives had been involved. In that period, most of his attention was focused on the crisis of the Palestinian unity government. In fact, Arouri was the first to take responsibility for the abduction and murder, and the things he said publicly, on Aug. 20, at a convention of Turkish religious scholars in Ankara, caught almost the entire Hamas leadership by surprise.

But as the Hamas movement is wont to do, after every terror attack against Israel, its leaders and activists close ranks with the terrorists, even if the attack ran completely against the opinion of the Hamas heads and contrary to the interests of the movement in that period. Thus, Meshaal, former Hamas Prime Minister Ismail Haniyeh and the entire Hamas leadership — in the West Bank, in Gaza and in Israeli prisons — closed ranks with Arouri and created a united alliance of radicals dictated by Arouri from Turkey — an alliance that shifted the entire movement's policy. Ultimately, Hamas was pulled into the Protective Edge campaign, Gaza absorbed a ringing blow and its leaders are still licking their wounds to this very day.

Be his actions guided by a desire to shore up his position as a worthy, militant alternate to the factious leadership of Hamas today, or due to the hard-line ideology he adopted (though he had previously been considered the leader of the pragmatic line in the West Bank), Arouri continues to plan terror attacks from Turkey. This is facilitated by the warm hospitality offered to him by Erdogan.

On Nov. 27, the Shin Bet disclosed activities of Hamas operatives, under Turkish Hamas branch direction, to carry out a series of terror attacks in Israel. This included a mega attack in Jerusalem’s Teddy Soccer Stadium and an attack on the city’s light-rail.

Another activity connected to Hamas' Turkey branch was the establishment of operational infrastructure for carrying out a coup against the Palestinian Authority (PA). Shin Bet chief Yoram Cohen brought this information and the names of the suspects who were arrested to the attention of PA President Mahmoud Abbas, in a meeting held in Ramallah during the Protective Edge campaign on Aug. 18. The information presented by Cohen also included incriminating documents and records, which astounded Abbas. In a harsh conversation that took place in Qatar on Aug. 23, with Meshaal in the presence of Qatar’s Emir Sheikh Tamim bin Hamad Al Thani, Abbas rebuked Meshaal for the attempted coup planned by Hamas against him. Meshaal admitted then that he had no idea about this attempt. He was apparently ''surprised'' again by Arouri's activity in Turkey.

Meshaal, who is himself under the protection of Sheikh Tamim in Qatar, is well aware that the new power base being created under Erdogan’s aegis threatens his position. Arouri succeeds in affecting Hamas’ policies and considerably challenges its leadership.