Award-winning documentary “The Wanted 18” reveals the nonviolent ambitions of Palestinian activists in the first intifada who wanted to challenge Israel’s occupation through means of self-sufficiency and tax evasion. 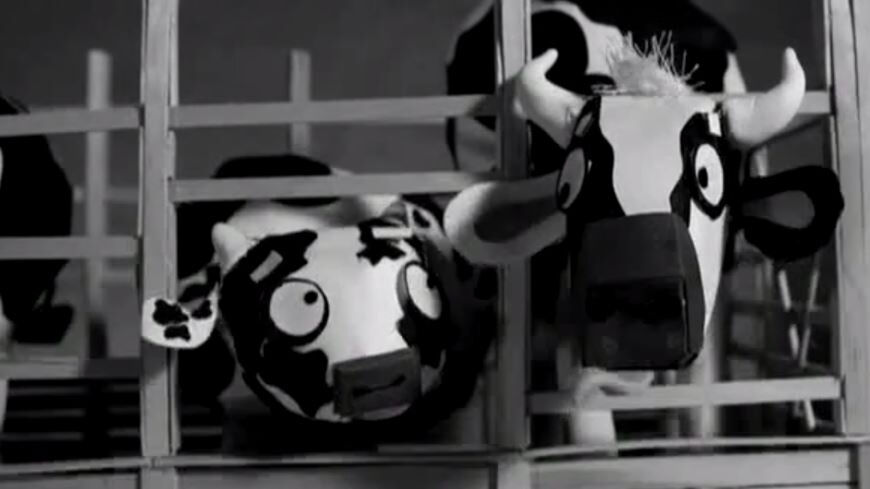 An award-winning documentary has provided Palestinian and international viewers with a rare inside look into the first Palestinian intifada. Saed Andoni, the co-producer and driving force behind “The Wanted 18” was a high school student at the time of the Palestinian uprising that began in 1987 and ended with the Madrid peace talks and the Oslo Accord. Andoni, now in his early 40s, told Al-Monitor that it took him five years and $1 million to produce the film that focuses on one small story. In the process, however, the film has succeeded in giving an authentic and creative narrative of the first Palestinian intifada. The film has been shown at the Toronto International Film Festival and won Best Documentary of the Arab World at the Abu Dhabi Film Festival. It also received a rare positive review from Variety magazine.

The film focuses on the fate of 18 cows that Palestinians from the small town of Beit Sahour decided to buy from an Israeli kibbutz to implement the intifada’s main nonviolent goal of independence and self-sufficiency.

The heroes of the film are school principals, pharmacists, housewives, doctors, agriculturalists and high school students. These urban civilians decided in 1987 to put the political theories and Palestinian ambitions of getting rid of the occupation into practice. Following the well-known American cry of "no taxation without representation," these heroes and their tightly knit Palestinian Christian community declared civil disobedience and refused to pay taxes to the Israeli occupiers. Knowing that their nonviolent act would invite the full force of the Israeli occupation, they decided to create victory gardens on their balconies and small pieces of unused lands. To supply the town with milk, they decided to buy cows and take up the challenge of looking after these cows and distributing their milk.

Audiences across the globe might not initially believe that this agricultural act is innocent, but to the Israeli army, which was terrified of Palestinians becoming self-sufficient, this was nothing short of a declaration of war. Israeli military officers interviewed for the film admit that they were concerned that this action would spread, empowering Palestinians. Until the very last scene of the film, Israeli military officials were curious as to what happened to the cows.

The Israeli war on Palestinians for daring to buy and depend on cows was real. Soldiers were deployed and orders were given to shut down this "dangerous" Palestinian operation. After threats that the Israelis would destroy the makeshift barn the cows were held in, the local leadership in Beit Sahour decided to hide the cows in various locations, prompting a thorough Israeli army search for the 18 cows that were “threatening the security of the State of Israel,” according to a housewife interviewed in the film.

To tell this story, the makers of “The Wanted 18” had to use a variety of cinematic tools. Besides straightforward interviews with some of the key actors in that period, the producers used animation to bring some lighthearted moments to the adventures the cows — which were given Israeli names — had to go through to avoid both the Israeli army and the possibility of becoming "dead meat."

Some of the key scenes in the film were re-enacted and the producers used some actual footage taken from Beit Sahour during the 40 days it was surrounded and under curfew, when the Israeli army tried to break up the civil disobedience effort by confiscating the furniture of Palestinians who had refused to pay taxes to the occupiers.

Viewers of the 75-minute long documentary are offered a rare look into the making of the intifada. The role of the underground leadership, the tactics of the movement and the challenges of an unarmed community facing one of the most powerful armies in the world provides the context and the framing of the film and captures an important era in the Palestinian struggle. The story of Antoun Shomali, a young faceless leader who often slept with the cows as he tried to avoid arrest, and who was gunned down by Israeli troops as he was fleeing from the Israeli army, is told by his mother and friends.

Amer Shomali, the film’s co-director and cousin of Antoun, provides the narrative of Palestinians living in the diaspora. He tells the viewers of the importance of Yasser Arafat and the dream of returning to Palestine in the lives of Palestinian refugees around the world.

In addition to the story of how Antoun was killed, “The Wanted 18” ends — perhaps as a reflection of reality — on a downer. The heroes of the documentary lambaste what has happened to the Palestinian national struggle. They protest the way the intifada was hijacked, and they are not shy about their opposition to what happened in Oslo. They also protest the fact that the leadership, which came with the PLO from outside, has taken over a struggle that was started by local leaders.

Speaking to an overcrowded hall at the Royal Cultural Center in Amman Dec. 5, Andoni summed up this disappointment. “We have lost the initiative and we are reacting rather than acting,” he said.

In an interview with Al-Monitor, he expanded on these issues, saying that in the first intifada Palestinians employed nonviolence and civil disobedience, forcing the Israelis to react to these actions. “Now, all we are doing is reacting,” he said, referring to Palestinian negotiators reacting to the various proposals of the Israelis and Americans.

Andoni admitted that this was a challenging film to produce. Perhaps it was tough because of the complicated reality that exists in Palestine. However, for the audience the story line was simple and the narrative was clear; this is a film about real Palestinian heroes who dared to stand up to the Israeli occupiers.