Dalia Hatuqa reviews the book based on Julia Bacha’s award-winning documentary about the story of Budrus’ nonviolent protest against the wall. 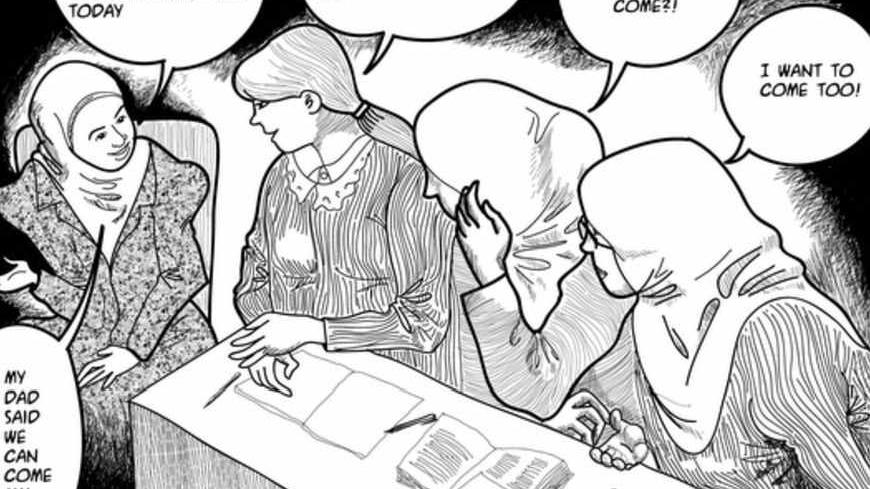 A new graphic novel, Budrus, based on a film by the same name, is intended to keep the story alive. It's currently available only in Arabic, but this panel has been translated. - Just Vision

Amid the Western media’s obsessive search for a Palestinian Gandhi, many stories of peaceful, non-violent resistance are often overlooked. One such story is that of Budrus, a small West Bank village — dotted with ancient olive trees and cacti — lying very close to the Green Line (the internationally-recognized border separating Israel from the West Bank). In 2003, Budrus’ residents found out that Israel’s separation wall would swallow chunks of their land. It was then that the villagers decided to employ non-violent tactics to protect their trees and land.

Budrus’ story was captured in an award-winning film directed by Julia Bacha in 2009. The story of the unarmed popular struggle is now being told in the form of a graphic novel (available here in Arabic) through the eyes of 15-year-old Iltizam, the daughter of Ayed Morar, who spearheaded the peaceful demonstrations.

The graphic novel’s creator, Irene Nasser, said the purpose of the book is to keep the story alive and highlight the role that the women of the village played in recapturing some 95% of the land that was intended for confiscation for the wall’s path.

“After seeing the impact the film had locally and internationally, we wanted to highlight some of the issues shown in the movie and bring those to Palestinian children,” said Nasser, the strategic projects coordinator at Just Vision, the book’s publisher. “A key element was the role of women who took to the front lines and changed the nature of the struggle in Budrus.”

Ayed Morar was the brains behind the movement that included weekly peaceful demonstrations. But at the heart of it were Budrus’ women, encouraged by Iltizam’s stamina. In the book, we see Iltizam getting the initial go-ahead from her father to join the village boys in a protest and then sit among a gathering of Budrus’ men to discuss strategy. She then tells her girlfriends at school that she will be part of the demonstrations, which encourages them to follow suit.

The story shows how the Morars manage to unify the different political factions present in the village, get the support of international and Israeli activists, and encourage Budrus’ women to join the movement. In less than a year, their efforts pay off and Israeli authorities decided to re-route the wall.

“I refused to stand with my hands crossed,” writes Iltizam in the graphic novel’s foreword. “The women quickly became an integral part of the village movement, and they … became the heart and soul of the resistance. The high spirit that I saw beaming from every woman in my village gave me great strength.”

In the graphic novel, we see women, young and old, standing with banners in front of machine gun-clutching Israeli soldiers. In one instance, Iltizam finds herself alone in front of a mammoth bulldozer. She stands still, forcing the machine to retreat. It is then that she and the rest of the demonstrators race to replant the trees uprooted by the bulldozer.

The graphic novel was launched on Thursday [May 2] at the Budrus Girls School in a ceremony akin to a Palestinian wedding. There were dances, poetry reading and speeches by local leaders who emphasized the role played by the unified village factions.

Courtesy of Just Vision. Translated from Arabic for Al-Monitor

“People ask us why we were successful,” said Ahmad Awad, a community organizer and Hamas member. “We say it’s because our movement was inclusive of all people from all factions.”

The sister of Sameer Awad, the 15-year-old who was killed by the Israeli army in Budrus in January, spoke of the role women played in the movement. “The men didn’t have to make too much of an effort to convince the women to join the struggle,” Lina Awad said. “And the women didn’t have to do much to convince the men that they should be at the forefront of the movement.”

The story of Budrus — and many others like it, such as Ni’lin, Bil’in and Nabi Saleh — dispel common misconceptions that Palestinians do not have a history of non-violence. During the first intifada, "this movement was used as the main strategy against occupation," Ayed Morar said, adding that "Israeli authorities have exercised brutal violence against such movements to render them moot."

Like the film, which is still being shown in villages and towns across the West Bank, the graphic novel will be distributed in schools, summer camps and women’s clubs to tell the story of Budrus, and more importantly, engage Palestinian youth around the role of women in the unarmed popular struggle, according to Nasser.

Indeed, many of the village leaders were arrested at one point and many of the demonstrations were quashed by force. At times, demonstrators were met by live fire. “We must remember that 32 people have been killed so far resisting peacefully in different villages across the West Bank,” Ayed Morar stressed. Even at the launching, as the graphic novels were being handed out to the children, an Israeli army jeep rumbled onto the olive groves overlooking the school and tear gas was shot at a half dozen youth.

Dalia Hatuqa is a contributing writer for Al-Monitor's Palestine Pulse. A print and broadcast journalist specializing in the Middle East, she is based in the West Bank city of Ramallah and writes for several publications about politics, the economy, culture, art and design. She regularly contributes to Al Jazeera's English website, The National (UAE), and Brownbook and Masquerade magazines.