Non-Violence Movement Tears At the Mask of the Occupation

The Israeli establishment is unable to cope with the new Palestinian way of fighting for their land — the non-violent struggle. Its aim is to “shift attention from the respectable meeting rooms.” Eldar and Raz have participated at many demonstrations and share an insider’s perspective and analysis of the change in power relations. 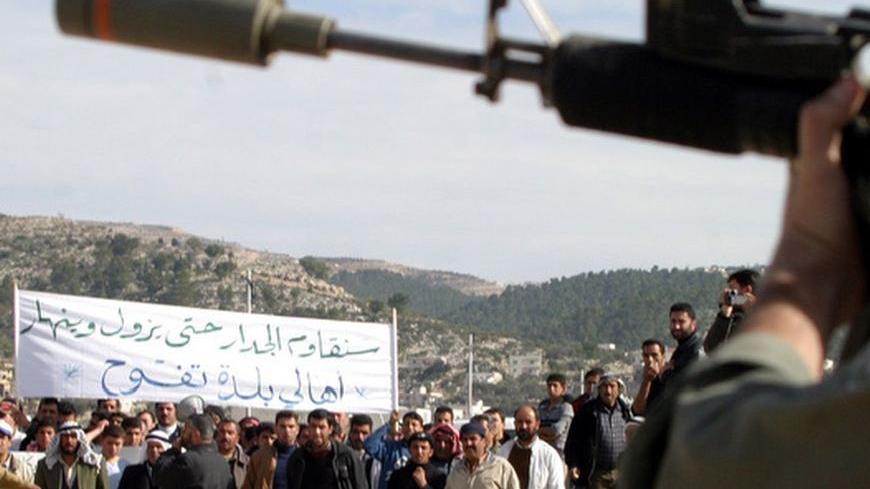 Israeli soldiers prevent Palestinian and international protesters from going to their confiscated lands at the Israeli separation barrier outside the West Bank village of Tarqumia village near Hebron, January 14, 2005. - REUTERS/Nayef Hashlamoun
May 28, 2012

When then-prime minister Ehud Barak returned from failed negotiations at Camp David, he expressed pride in one achievement: tearing the masks away from the faces of the Palestinians. That’s where the “no partner” spin came from. The facts from that point onward are familiar to everyone.

"Tearing away masks" is also at the foundation of the non-violent struggle that Palestinian activists have been conducting for close to a decade. What started as spontaneous and sporadic demonstrations — against the construction of the Israeli separation barrier on Palestinian village lands — has developed in recent years into a strategic choice to which wide portions of the Palestinian public and leadership are partner. A symbolic indication of such can be seen in the repeated attendance of Palestinian Authority Prime Minister Salam Fayyad at the annual conference in the village of Bil’in, organized by members of the Popular Committees, which is behind the struggle.

The infrastructure of the non-violent struggle is composed of several layers, and a close look explains why Israel has trouble dealing with it. It is worth noting that the fight is not devoid of violence. On the contrary. From Gandhi’s time up until today, activists in non-violent struggles have sought to expose a violent reality which is at the base of any regime of occupation or repression. The regime seeks to play down this institutional violence through legislative manipulation and governmental practices. Gandhi, Martin Luther King, Jr. and their successors chose to expose themselves to that violent reality inherent to occupation, in order to expose it to audiences that prefer to deny it or ignore its existence. There is thus no reason to be surprised by the violence demonstrators face. It can and should be understood that this violence is directed at those who seek to remove the mask from the “enlightened occupation,” the status quo, and business-as-usual. This mask is, of course, designed by the Israeli regime, which seeks to continue implementing its policies without disruption and without harm to its image.

This action shifts the arena from the space that Israel has sought in recent years to maintain. The non-violent protesters seek to shift attention from the respectable meeting rooms to reality on the ground. For them, the true test is not the constant chatter about “political negotiations and steps toward peace,” but the deepening occupation taking place simultaneously with that rhetoric.

This kind of struggle also enables the incorporation of large groups undesiring or unable to take part in violent action. All of the demonstrations thus enjoy the significant presence of women and children, and international and Israeli activists also are incorporated into the anti-occupation struggle. The value of this incorporation is two-fold: it makes demonizing the participants difficult, and it increases the likelihood that they will be heard by significantly expanding the audience for their claims. The beating of the activist by Lt. Col. Shalom Eisner, for example, would not have enjoyed a fraction of the coverage it attracted had a Palestinian resident of the Jordan Valley been attacked. And it can be assumed that Israeli representatives would not been so inclined to explain the incident to foreign ambassadors had one of their citizens not been hurt.

At the same time, the international character of the demonstrators presents a challenge to the separation policy that Israel has advanced in the last decades, and to the dichotomous distinction between the “villa” inhabited by the “cultured westerners,” and the “jungle” of the violent, imaginary “other.”

And indeed, it is impossible to refer to the non-violent Palestinian struggle, and Israel’s difficulties in dealing with it, without noting its moral foundation and the goals its leaders have set out. Bassem Tamimi, one of its leaders and symbols, defined the struggle two years ago: “Popular resistance refers to the activities that wholly reject the occupation and do not seek as goals the killing or harm of others.” He says that this struggle will be considered a success “if we succeed in creating a successful model of civil protest, if we prove that we are not terrorists and that we are the owners of this land. We want to transmit to the Palestinian people and to the Israeli people a message that there is another model of resistance — non-violent resistance.”

Just a few days ago, shortly after Tamimi was released on bail from his 13-month detention — during which he was recognized as a human rights defender by the European Union and a prisoner of conscience by Amnesty International — he added, “When you kill someone, something inside you dies. Killing negatively influences our society. Hence avoiding killing serves us in our struggle for freedom. Resistance to killing comes from resistance to the occupation.”

And, you must admit, it’s not easy to contend against such an opponent. Especially if you are seeking to perpetuate that occupation.

Eyal Raz is a solidarity activist in Sheikh Jarrah, Jerusalem, and Akiva Eldar is a senior analyst at Ha'aretz.