The producers of "Marwan," a documentary about the life of imprisoned Fatah leader Marwan Barghouti, hope to revive national pride among Palestinians with his story. 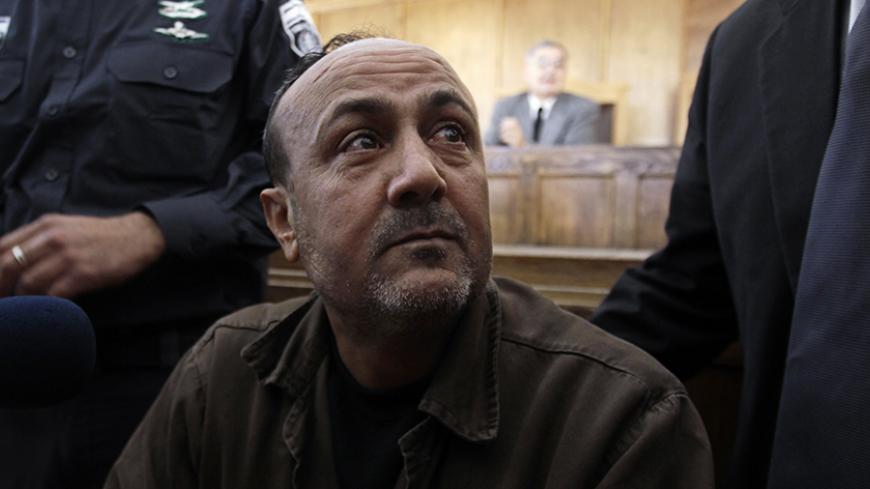 The audience at the grand opening of the documentary was not the usual art crowd. More than 1,200 Palestinians including politicians, students and laborers crowded the main hall at the Red Crescent Society in al-Bireh Feb. 7 for the premiere of “Marwan,” a documentary about imprisoned Palestinian leader Marwan Barghouti.

Before the screening, Palestinian Prime Minister Rami Hamdallah, along with senior members of his Cabinet and top Fatah officials filled the front seats of the auditorium. Hamdallah called Barghouti an "icon” of Palestinian resistance. He expressed support for his immediate release, referring to the imprisoned leader as a genuine expression of Palestinian aspirations to live in peace. “He has served more than 20 years of his life in jail, and he has made this sacrifice for the dignity and the freedom of Palestinians,” he said.

Hamdallah added that President Mahmoud Abbas and the Palestinian leadership endorse the efforts of the Belgian parliament, which nominated Barghouti for a Nobel Peace Prize. In May 2016, the Belgian lawmakers praised Barghouti’s democratic principles, saying in a letter addressed to the Nobel Committee: “Marwan is an elected representative of the Palestinian nation, and was the first parliamentarian to be arrested. … He is a democrat defending human rights, notably women's rights.”

The idea for the documentary was conceived in Cairo, according to Raed Othman, the director of Maan News Aِِgency, the leading Palestinian wire service and television station that produced the film. Othman told Al-Monitor, “We were sitting in Cairo back in October 2015 with Fadwa, Marwan’s wife, as she was telling us about how the two of them met and I wondered, why not produce a documentary about Marwan?”

A year and a half later, “Marwan,” a 70-minute documentary, premiered in Ramallah’s twin city of al-Bireh and is scheduled to be shown in some 70 Arab and international venues. Jordan, Egypt, South Africa, Paris and London are among the locations expected to screen the documentary in theaters before it is to be broadcast on television. Palestine's official state television station, Palestine TV, which was one of the co-producers and contributed footage to the documentary, is expected to debut the film after its theater run sometime later in the year, according to Othman.

“Marwan” was produced and directed by young Palestinian director Ahmad Barghouti (no close relation) and is more of a political documentary than a work of art. Othman noted that the story of Barghouti is the classical story of all Palestinians. “He was 8 years old when the 1967 occupation occurred. He came from a poor family and graduated from Birzeit University, where he headed the student council. He became a Fatah youth leader. He was deported in the first intifada, returned with [Yasser] Arafat and dedicated his life to the Fatah youth movement he had helped establish. He was imprisoned many times and yet he has never given up. And today, he has become the highest vote receiver in the seventh Fatah congress.”

In a testimonial presented in the documentary, Abbas praises the jailed leader and says that Barghouti’s political ideology exactly matches his own. Majed Faraj, the current head of the Palestinian Intelligence Service, also agreed to be interviewed for the film and spoke highly of Barghouti's “resistance” spirit. Leaders of Hamas, the Islamic Jihad, the Popular Front for the Liberation of Palestine and others are also included in the documentary.

The documentary’s scriptwriter and narrator, Nasser Laham, told the audience at the film’s opening that it was difficult to make a film about an inaccessible person, saying, “Sometimes films are made about people who are already dead, but in this case our hero is very much alive but we are unable to reach him.” Laham said that the documentary team decided to tell Barghouti’s story up through his arrest in 2002.

In “Marwan,” the audience is shown many different faces of Barghouti: the resistance fighter, the inspirational speaker, the strategic leader and the field tactician, as well as the peace supporter and advocate of the two-state solution. “While the film was being screened, we noticed that many of the young people attending who have known Marwan as a symbol were excited when they heard excerpts of some of his fiery speeches, but were not thrilled to see him defend peace with Israel,” Othman said.

As a documentary, “Marwan” will not be praised for its cinematic creativity. Mohammad Lahham, a member of the Fatah Revolutionary Council, told Al-Monitor that he would have liked to see a much more refined and higher quality film. He said, “It could have been a stronger film artistically. It also misses some important humanitarian opportunities, such as the marriage of Marwan’s son, which the imprisoned leader was unable to attend.”

Othman admits that the film, which cost $200,000 to produce, is “humble” in its production value, saying that its focus was on ensuring that “Marwan” reflected and embodied Palestinian unity. “What is important about the documentary is that a wide spectrum of Palestinians from all national and Islamic factions speak supportively of Barghouti in the film. We gave these factors higher priority than other factors,” Othman said.

Politicians planning to run for higher office often lay the ground by publishing a memoir telling their life stories and reflecting on their political principles. In the case of the leading contender for the highest position in the Palestinian leadership, the documentary is perhaps the nearest thing to a political memoir. But Barghouti the Palestinian prisoner doesn’t need to convince his people with a memoir. What is needed is to strengthen the worldwide movement calling for his release so that he can be part of the leadership that is trying to bring independence and freedom to the Palestinian people.