Palestinian filmmaker Raed Andoni talks about his and other former political prisoners’ hunt for the ghosts that remind them of Israeli torture. 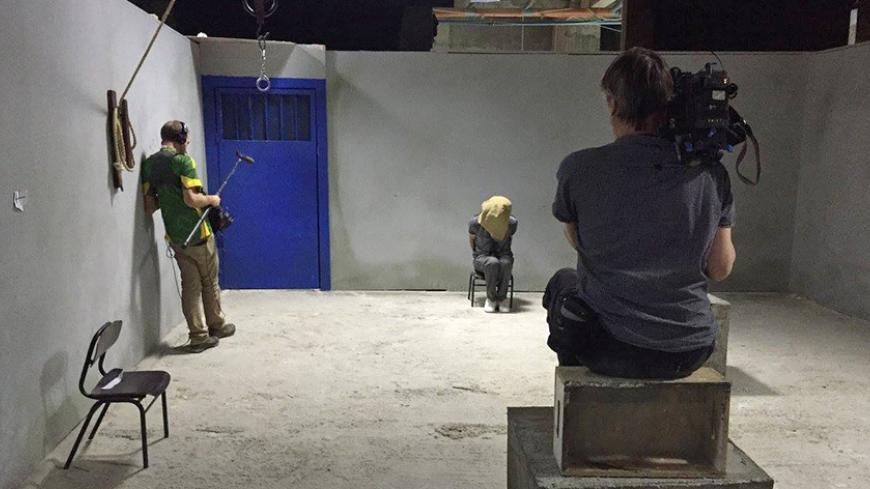 The crew of the documentary "Ghost Hunting" film a scene in Ramallah, the West Bank, in this image uploaded Nov. 10, 2015. - Facebook/Ghost Hunting

When he was only 18, Raed Andoni was arrested near his Beit Sahour home, south of Bethlehem. Twenty-eight years later, Andoni was in Germany at the Berlin International Film Festival (Berlinale) being celebrated for producing a documentary about what happened during those days to him and to other Palestinian prisoners.

“Istiad Ashbah” ("Ghost Hunting") is a documentary about attempts by Palestinian prisoners to conquer their ghosts and rebuild their lives.

A co-production between Palestine, France, Switzerland and Qatar, “Ghost Hunting” premiered at the 67th Berlinale in February, where the film won on Feb. 18 the main documentary prize and one of three audience awards.

Andoni was arrested in 1985. Since then, many Palestinians have been arrested and repressed, especially after the 1987 Palestinian protests that introduced to the world a new term, “intifada.” Andoni spent a year in various Israeli jails, but the trauma stayed with him for years.

As is customary, the detained Palestinian was blindfolded and after some time in the back of a military jeep, he was dumped at the Mascobia jail in Jerusalem. The dreaded Israeli prison, named after the Russian Orthodox Church that is across the street, has been the place where many Palestinians, including Andoni, were held, tortured and abused. Since the 1967 occupation, some 800,000 Palestinians have been detained by Israel, roughly 20% of the total population and 40% of the total Palestinian male population.

Speaking to Al-Monitor, Andoni explained the long gap between his arrest and the production of the documentary. “I needed nearly 30 years to be mature enough to be able to produce this film. I needed the self-confidence, the courage, and to have developed enough experience of a cinematic language that allowed me to be involved in this collective production.”

It was during the 20th therapy session that Andoni came to the idea of the new film. “I first started writing it as a fiction film, but then realized that what was needed was something much more complicated.” Andoni decided he needed a more comprehensive psychological approach. “I decided to search for a plan that would allow me to go all the way emotionally in my search for closure.” In his search, Andoni came up with a plan that combined this emotional search through a new cinematic language.

Andoni spoke to Al-Monitor by phone from France about the unique emotional and cinematic plan that he devised.

Before actually beginning the building and filming process, Andoni sought the advice of Dr. Fathi Fleifel, the head of mental health at the Red Crescent Society. “I wanted to be sure I wasn’t doing something that could cause more harm than help. But Fleifel was very helpful. He gave me advice, nominated one of his staff to be with us and visited us regularly,” said Andoni.

One of the strongest pieces of advice that Fleifel gave Andoni was that he should not oppose any of his builders' requests to leave the project. “He was adamant that if I forced them to stay, they will have permanent damage.” Andoni agreed and made that announcement before filming started. “Only one former prisoner couldn’t handle the emotions and asked to be relieved after two weeks. All other participants stayed on till the end.”

As the former prisoners began building what they could remember as the physical structure of their prison, cameraman Camille Cottagnoud began filming interviews with the participants.

By the time the prison building was completed, many of the former prisoners brought their families to the site and relived with them what had happened to them when they were held and tortured. “It was such a moving time full of energy and happiness despite the fact that the stories were very emotional. The angry emotion was replaced with emotional relief,” Andoni said.

Andoni conducted the interviews and was also the subject of the interviews in some clips. Palestinian actor Ramzi Maqdisi was tasked with re-enacting some of the stories that the prisoner/builders remembered.

In post-production, Denmark animator Luc Perez was hired to create some animation inserts to help tell the stories of the prisoners. But the biggest problem facing the Palestinian filmmaker was in the editing process. “I worked with Arabic-speaking Lebanese editor Gladys Joujou to review and edit more than 120 hours of filmed interviews and re-enactments,” he told Al-Monitor.

After finalizing the film and before showing it internationally, Andoni brought the film to Ramallah to share it with those who helped make it possible. “We expected about a hundred people to attend, but were surprised that more than 400 people came and they stayed for hours talking after the film and reflecting on their experiences as they conquered their own ghosts.”

In addition to participation in major festivals, Andoni said he would like to have “Istiad Ashbah” tour throughout Palestinian towns and villages, allowing the hundreds of thousands of Palestinian prisoners to use this cinematic experiment to search and hopefully conquer their own ghosts.