The Lebanese parliament has passed a law on domestic violence, but many argue that it is insufficient. 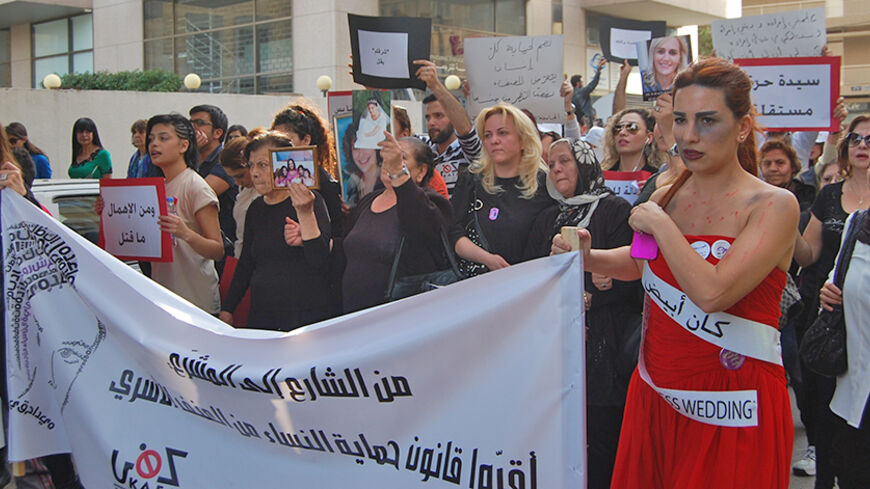 Participants in the March for Women's Rights move through Beirut, March 8, 2014. - Florence Massena

The Lebanese parliament passed a new law on domestic violence April 1. The idea for such a law was born in 2007 in the offices of the group Kafa [Enough] Violence Against Women. The project for a law protecting women against violence brought together 64 nongovernmental organizations, which submitted the draft to the government in 2009. Five years and two revisions later, the new law little resembles the original text. The wording used in the final draft says it all — “domestic violence,” not “violence against women.”

Two days after the vote on the law, Human Rights Watch declared the legislation “good, but incomplete.” Maya Ammar, Kafa's media officer, shared this opinion, telling Al-Monitor, “This is a big step for women's rights, but it is not enough.” According to Ammar, the only real breakthrough is that the law simplifies some legal mechanisms. Among the undesirable changes made to the original text is the provision involving marital rape, which is now “marital rights by force” and is condemned only if it involves physical evidence of violence.

After six months of adapting the association's work to the new law, Ammar came to the conclusion that the implication of the law is not so bad. She said, “Most of the judges are fair in their decisions, protecting the children as well, which is good.” Regardless, Ammar still thinks improvements are necessary. She stated, “We should unify the [complaint] procedures, so there is a straight line of action to follow, and also expedite the process. Sometimes, women don't have the time to wait for the judges to decide!”

This was the case for Nisrine Rouhana, killed by her husband while she tried to obtain a divorce after complaining of domestic violence. Ammar stated, “Her parents said that the police didn't arrest the husband, who didn't respect the restraining order, a fact that was never declared to the authorities by her own lawyer.”

Kafa's priority is to raise awareness among Lebanese women about their rights. To this end, the organization created Zalfa, a fictional character who explains the law and provides answers to those wanting to know what they can do in specific situations.

“Women are often scared to file a claim, but speaking up early limits the risks,” Ammar said. “We hope that this approach will give them tools to pull through. Since January, 1,050 women have been supported by Kafa, which is much more than usual. We are overburdened, this is too much for a small center like ours. The state has to take responsibility and act. One of the actions could be to open shelters for women.” Kafa plans to open its own shelter in 2015, joining private initiatives such as Le Bon Pasteur and Maryam and Martha in this regard.

Maryam and Martha, a shelter for female victims of violence, sits on the road to Balloune, a village in the mountains. It was founded in 1999 by Father Abdo, a priest who purely by circumstance assisted three women after they had fled their homes a year before and ended up at his church.

“I looked to see if there were associations that could take care of them in Lebanon, but I did not find any,” Abdo recalled to Al-Monitor. “They were neglected, both morally and economically. So I had the idea to form a small group of women to engage under the patronage of the bishop.”

The center began with an apartment in Ain al-Remmaneh. In 2009, the team moved into a new center, built with the support of private and group donations, but the road has not been easy.

“At first we were not well-viewed,” the president of Maryam and Martha said. “We were not ready to deal with the most difficult cases, but we have learned from our mistakes, and we are now working with qualified staff, including social workers and psychotherapists.” Fifteen years later, the center can accommodate up to 42 women ages 18 to 50 in addition to 15 children, whom it helps reintegrate into society.

Today, the community of Maryam and Martha opens its doors not only to women who have suffered domestic violence, but also to those affected by parental abandonment, rape, incest and depression, and it assists unmarried mothers, former prisoners, drug addicts and “circumstantial prostitutes.” Those seeking assistance are from all religions. They are sometimes accompanied by their children. Kids under three are cared for in-house, while the rest attend surrounding schools.

“We coordinated with all the embassies, women's organizations and also the police,” said Roula Abou Diwan, the center's director. “We organized a rehabilitation program in four stages to allow reintegration into society. First, the women get to know the place and receive medical, social and psychological care. Then we give them work based on their skills and invite them to volunteer with disabled people, as well as give them internal responsibilities, such as laundry and cleaning. If they wish, they can follow specific trainings or return to school or begin to look for a job. Eventually, we help them prepare their way out, but each case is unique, so we adapt according to legal documentation.”

Daycare is provided at the center to allow everyone to attend classes and trainings. There is also a gym, so women can work out their anger and sadness, and a chapel, where one finds both the Bible and the Quran.

Salma, 23, is one of the women at the center. Beaten by her family and tortured by her husband after a forced marriage, she escaped from her home a year ago. “I did not know that there were associations that could help me, but now I feel like I have a family,” she said smiling. “I have a new life. I learn English and baking. I have no fear. I even feel capable of loving and being loved.”

Meanwhile Nisreen, an 18-year-old Syrian woman who arrived at the center while not legally an adult, is expecting a judicial decision allowing her to leave. “I want to become a nurse to give to others all the kindness that was given me, so that no one feels alone, ever.”