French President François Hollande has decided to promote an initiative to convene an international Middle East peace conference out of concern that the current political stalemate might lead to further escalation in East Jerusalem and the West Bank. 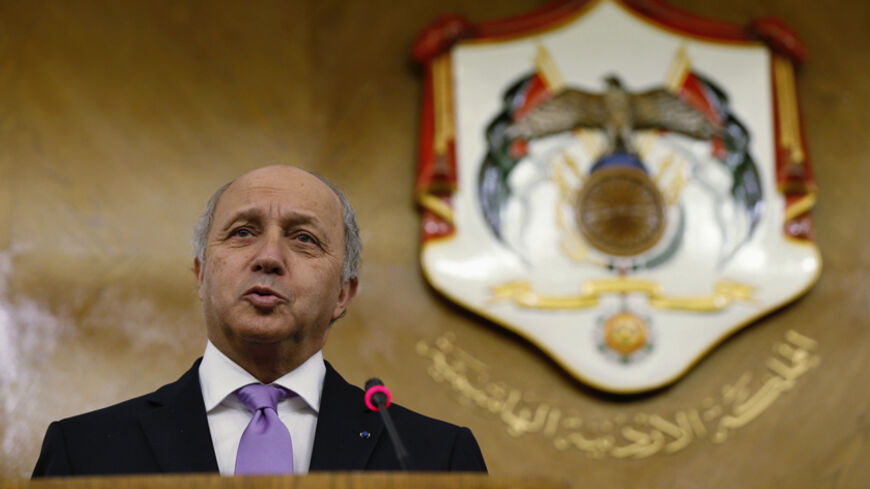 French President Francois Hollande has decided to launch an initiative convening an international conference on the Middle East, out of concern that the current political stalemate is leading to a violent deterioration in East Jerusalem, the West Bank and possibly also in Gaza. This decision is yet another sign that Europe wakes up when the United States starts to give up on the region, a senior source at the French Foreign Ministry who spoke on condition of anonymity told Al-Monitor. .

The French analysis leading to this move holds the Palestinian issue as central to regional stability. The fight against the Islamic State in Syria and Iraq does not lessen the importance of solving the Palestinian issue, but actually calls more urgently for a viable peace process.

"The last thing the Middle East needs right now, with the backdrop of Muslim fundamentalism inflaming the region, is a violent outbreak between Muslims and Jews over Jerusalem," said the French diplomat.

The French, who have already conveyed their thoughts to Washington and to most European capitals, want to engage the parties in a process that would create an international umbrella for future peace-making. They are eager to prevent a US veto on a Security Council resolution over Palestine. Thus, they are contemplating transforming the new initiative for a framework for convening an international conference into a Security Council resolution to be added to precedent resolutions 242 and 338. The proposed framework would limit the negotiations for a two-state solution to a period of two years. Paris is attempting to coordinate with Jordan, the current Arab representation on the Security Council.

The United States, according to US diplomats in Tel Aviv, is aware of the European ambitions and will not attempt to curtail them. Washington has already given a general go-ahead to the European Union on its policy initiatives and reactions to Israel's settlement policies.

The Palestinians, according to Paris, are politely and skeptically on board. Palestinian President Mahmoud Abbas' circle is looking for diplomatic achievements at the UN to combat Hamas' drive for influence in the West Bank. The mood in Ramallah is one of gloom and doom. The only glimpse of hope now, according to officials in Ramallah, lies in the upcoming 2015 Israeli elections. While the Palestinians are determined not to intervene, even indirectly, they do hope for a change in the composition of the next Israeli government.

"It cannot get any worse," a confidant of Abbas told Al-Monitor on condition of anonymity. He emphasized that the Palestinians consider this government the worst ever since the Oslo process: a government that was "hijacked by [Economy and Trade Minister] Naftali Bennett and the settlers."

Ramallah is thus limiting its hopes to various initiatives by the international community and to a new, possibly more moderate Israeli coalition in 2015.

The French government is aware of and concerned about Palestinian despair. A French official who asked not to be named told Al-Monitor, "While Abbas struggles for moderation to get the upper hand, the Israeli leadership is voicing nationalistic tunes for election purposes, and the Americans are numb due to a contrarian Congress; the time has come to place a new agenda on the regional table."

Policy planners at the Foreign Ministry, who coordinate policies with European High Commissioner for Foreign Affairs Federica Mogherini and officials in London, Berlin, Cairo and Amman, are inclined to develop a basic framework not only for an international conference but also for an eventual resumption of the peace process.

The Arab Peace Initiative of 2002 will be a key component in such a plan, offering the legitimacy (both in the West Bank and within the Arab world) Abbas needs in order to agree to any future negotiation process. It is also the element that can bring other pragmatic Arab leaders on board, primarily Egypt. President Abdel Fattah al-Sisi's suggestion to deploy the Egyptian military, at least temporarily, in the future Palestinian state did not go unnoticed in European capitals. Such a move by Egypt could, in the view of the French officials, respond to some of Israel's security concerns. The security arrangements for the West Bank would be a second pillar in the new international framework for peace. This initiative would require the partners to refrain from any unilateral actions such as settlement expansion or UN bids.

All these good intentions, however, do not take into consideration the rejectionist mood of the incumbent Israeli premier. Prime Minister Benjamin Netanyahu is already planning his next government and reaching out aggressively to his right-wing base to try to outflank Bennett. The ongoing Israeli construction in East Jerusalem, the nationality bill and the nationalistic rhetoric against the Arab minority may all contribute to a fourth reign for Netanyahu. His moves are not only tactical, but probably reflect the real Netanyahu, one who embraces a right-wing nationalistic ideology and who harbors feelings of kinship toward the settler movement.

The political players in the Israeli center-left are obviously more attentive to international and regional voices advocating a renewed peace process. They are in need of a policy agenda with which they will be able to confront the prime minister, asserting that there is another way.

The one politician on the right who, according to senior officials in the Israeli Foreign Ministry, is somewhat open to European regional plans is, perhaps surprisingly, Foreign Minister Avigdor Liberman. He may well be the wild card in the upcoming Israeli elections.