Around 2,000 people from across Israel — Jews and Arabs, religious and secular — marched in support of the Hand in Hand bilingual school in Jerusalem after it was tagged and set on fire by extremists. 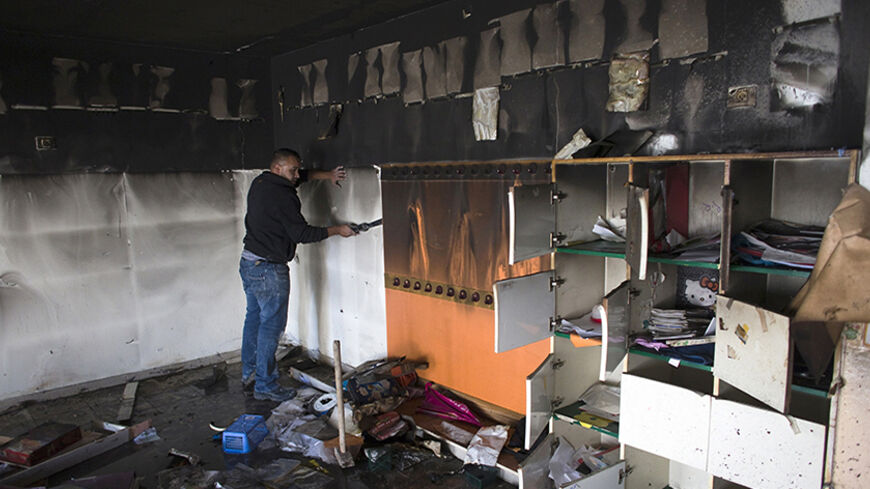 A worker cleans up in a torched classroom in an Arab-Jewish school in Jerusalem, Nov. 30, 2014. - REUTERS/Ronen Zvulun

Arik Saporta, principal of the Max Rayne Hand in Hand Bilingual School in Jerusalem, at first estimated that 500 people would come to a march in support of the educational institution after one of its classrooms was set on fire Nov. 29, apparently by right-wing extremists, who also tagged the walls with racist graffiti. Later, trying not to raise expectations too high, Saporta hedged, telling Al-Monitor, “Maybe only a hundred people will show up.”

On Dec. 5, however, you could see the excitement on Saporta's face, as some 2,000 people of all ages from across the country took part in a short march along the Train Track Park, which passes through the Beit Safafa neighborhood, to the school. Various activities for kids — including a clown performance, a cheerful band, food stands and inflatable bouncers — were set up at the school.

“It was a huge and happy event. Not to get into religious connotations, but I would say it was a revival for all of us,” said Shuli Dichter, executive director of the Hand in Hand Center for Jewish-Arab Education in Israel, which administers the school. Saporta added, “This was an event that was larger than the relatively narrow community of Hand in Hand.”

Jews and Arabs, secular and religious (including a few ultra-Orthodox), both leftists and rightists took part in the march. All of them considered the arson at the school a dramatic crossing of a red line. Some described the march as a wake-up rally for Israeli humanism, which crosses political lines.

“Yes, there’s a feeling of great hopefulness,” said Ilan Lonai Weiner, who attended the march with his wife and their two daughters, one of whom attends the affiliated bilingual kindergarten in Jaffa. “There’s an issue here that doesn’t have two sides. It’s a topic about which there is no discussion. The attack on an elementary school — you can’t understand and accept the other side of that. Left-wing demonstrations are usually very sad, but here I felt that my daughters are part of a generation of hope.”

“We are sad that they set fire to the school, but we are happy to see that there are so many people who think like us and want to be together,” wrote Samah Salaime Egbariya, a resident of the Jewish-Arab Neve Shalom village and director of the Arab Women in the Center (AWC), on the Local Talk website after the event.

The school, which has 620 students in grades one through 12, turned into a pilgrimage site and a focus of interest after the arson. Former Justice Minister Tzipi Livni came to visit. Rabbi Benny Lau delivered his weekly sermon there and the US ambassador, Dan Shapiro, visited with his wife. Students from the school visited President Reuven "Rubi" Rivlin’s residence and held a day of school there. The Poel Katamon team held a soccer game with students.

A week of unprecedented support for the small educational initiative thus ended with an impressive show of strength. “We are a civil society organization,” emphasized Dichter two days after the march. “We are building a joint educational infrastructure for Jews and Arabs, for the time being only at five sites, but soon we’ll open schools in other places. This means that we have to and want to be open to people of all political positions. The common division between right and left is less relevant today. It doesn’t matter what the political picture in Israel will look like, our initiative has to hold for another million years.”

“Soon we’ll calm down, after the media and the politicians, and we’ll get on with our daily work,” said Saporta. “We’ll teach many lessons that will touch on the civic issue, and from there we’ll build something stronger. Every grade and every class will have special projects this year on civics, including joint activities with other schools in the region.”

“We are also strengthening and institutionalizing our community work through fundraising, appointing community organizers and activities all day and all year,” Dichter said. “If you come in the evening to the school in Jerusalem, you’ll see cultural activity for adults [graduates] in the library, including adults whose children don’t attend the school. In the courtyard, you’ll see the Arab-Jewish basketball team practicing. The community has embraced the school in the last few months, and we are going through a series of trials that show our communal strength. It will only do good, and not just for the school.”

On a more practical note, the school hopes to leverage the ongoing attention to grow, a trend that had already begun before the recent events, but now unexpectedly has a powerful tailwind. Grades 11 and 12 only have one class each, but the younger grades have two classes each, so the school is expecting natural growth. “We don’t have dropouts, on the contrary, there is great interest in us,” Dichter asserted. He said the organization intends to open first grades in Jaffa and Haifa, where it now only has kindergartens.

“There was one mother who expressed concern after the incident,” Saporta revealed, “but the next day she saw the enormous support for us and said, ‘This is the place for me.’ In the last week, students who left us in past years came to study here. No one has dropped out. There will be a great interest in registration at the school for next year, so we hope and believe.”