How Carlos Santana is helping to promote coexistence in Israel

Carlos Santana will transfer part of his Tel Aviv concert benefits to the Hand in Hand network of Jewish-Arab joint schools in Israel. 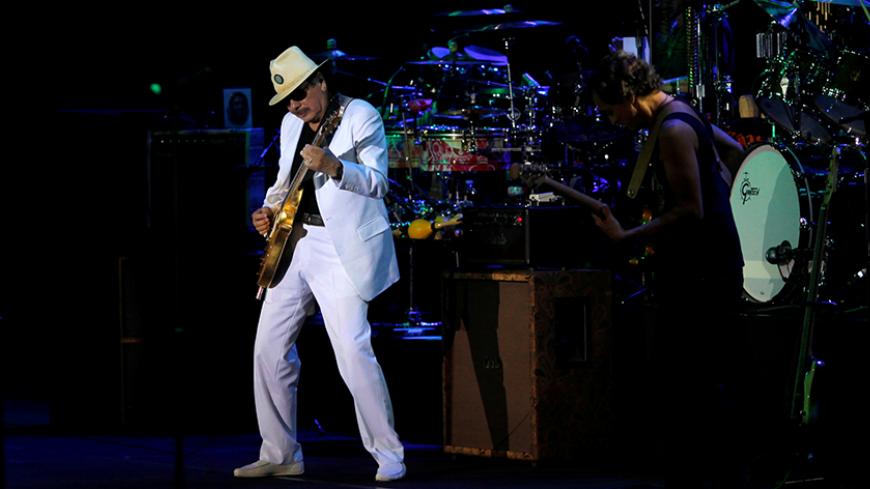 Carlos Santana, one of the world’s greatest guitarists, performed July 30 in Tel Aviv’s Ganei Yehoshua Park. But before his concert began, screens on the sides of the stage lit up and a film produced by the Hand in Hand Foundation was displayed to the 25,000 fans who filled the area.

“When our children grow up in a strife-ridden region, when Jews don’t meet Arabs and the reverse, how can we ensure that the children won’t grow up to hate?” someone in the film asked. Two children in the film waved a poster on which was written, in Arabic and Hebrew, “Bring them to the same classroom.”

Santana likes to tell his concert fans that the Milagro (Miracle) Foundation he founded with his family members chose to invest in children because they are the future of the world. The Hand in Hand Foundation shares the same goals as Santana’s philanthropic foundation, especially now.

Milagro Foundation Executive Director Shelley Brown told Al-Monitor on behalf of Carlos Santana that the connection between the Santana family foundation and the Hand in Hand foundation was born in 2003, when the Milagro foundation managers were introduced to the idea of advancing peace between Israelis and Palestinians through children and their parents, and by creating joint schools; an idea they found exciting. She said that upon his arrival to Tel Aviv for his concert, Santana expressed his enthusiasm over Hand in Hand activities and achievements and asked to meet its representatives. He also asked to donate part of the concert benefits to Hand in Hand's future activities. ''Santana was swept by emotions in Tel Aviv. The meeting with the foundation's representatives who are working to advance peace and understanding between the two peoples just added to his excitement,'' she added. ''You are a blessed beam of light. What you are accomplishing is admirable,'' said Santana to the representatives, according to Hand in Hand Executive Director Shuli Dichter.

The connection between the two foundations began when Lee Gordon, one of the two founders of the Hand in Hand Foundation, searched for foundations and organizations that would help promote the cause he led together with an old college classmate, Amin Khalaf. Gordon and Khalaf studied together in the Mandel School for Advanced Studies in the Humanities (of the Hebrew University in Jerusalem) and dreamed of founding joint schools for Jews and Arabs. Hand in Hand was founded in 1998. Its first school was established in the Arab town of Kafr Qara, and today Hand in Hand operates six schools in which 2,100 pupils will be studying.

“When I joined the foundation team, I believed that the mutual coexistence concept should be first disseminated among adults, not children,” Dichter told Al-Monitor. Dichter thinks that it is unfair to cast responsibility for resolving the complicated conflict on the shoulders of children. And so, in accordance with this worldview, the foundation has been trying for several years to widen its social activities, mainly among adults.

“The social community of the Hand in Hand Foundation is not limited to the 2,100 students,” Dichter explained. “The number of active participants is about 10,000 people. The adults are not only the parents of the schoolchildren. The number includes 300 professional staff members — teachers and administrators — and also volunteers. Together, they form a broad community, whose family members live by the concept of coexistence between Israeli Jews and Arabs, and actively disseminate it — in formal education and in the community as well.”

Each class in these schools has two head teachers — a Jew and an Arab. Together, they teach the curriculum in both languages and the schools operate according to a calendar that includes the Jewish, Muslim and Christian holidays.

In the last four years, the number of applicants to the Hand in Hand schools has grown significantly. “This is a counter-response to the Israeli leadership’s wild incitement against Israeli Arabs,” Dichter said, “to the extent that the professional staff members have their hands full. There is not enough room [in the schools] to accommodate the tremendous demand.”

Dichter figures that the jump in the demand to study in the organization’s institutions began five years ago. He claims that the phenomenon began in the summer of 2011 in the course of the social-justice protest movement in Israel, increased during the Pillar of Defense operation in the Gaza Strip at the end of 2012, and reached its height during the Protective Edge campaign in 2014. The more the phenomenon of hatred toward Arabs increased, the more parents turned to the foundation in response.

“We are witness to two opposing processes that are underway,” he said. “On the one hand, the state’s systematic institutional incitement has moved from discrimination against Israeli Arabs to open systematic incitement against Arabs in general, and Israeli Arabs in specific. On the other hand, we witness a counter-response by the parents, aged 30-plus, who want to instill democratic values in their children as well as equal rights and hope. They ask us to accept their children in our schools in Haifa, Jaffa, Kfar Saba, Kafr Qara, Jerusalem and the Galilee.”

Dichter maintains that a new generation has arisen that refuses to accept the “mandatory separation” imposed on them by the Israeli political leadership. Hand in Hand, said Dichter, made an important decision: to create social infrastructure based on bilingual public schools in order to disseminate the concept that “it is possible to live together if each side only gets to know the other side, to learn to live with the other and not fear him at all.”

This lofty idea requires funding. Santana, who contributes regularly to the foundation, promised 10% of the proceeds of his Tel Aviv performance to Hand in Hand. Although the exact sum has not yet been handed over, the estimate is that the philanthropic fund will contribute tens of thousands of dollars to the foundation from the sale of 25,000 tickets. Simultaneously, there are other foundations and organizations that view Hand in Hand’s mission as a sacred mission. These include Jewish organizations and foundations throughout the United States and Europe and Palestinian donors who view this foundation as a rare beam of light in the current dark period of Jewish-Arab relations in Israel. The budget of Hand in Hand has increased considerably in recent years, from 8 million shekels ($2 million) in 2011 to 23 million shekels ($6 million) in 2015. It is expected to grow even further, mainly by virtue of the Jewish diaspora that views the objectives of the foundation as the key to the continued development of a State of Israel that lives in peace with its Arab citizens.

“We have a large donor in Germany named Jalil Schwarz,” Dichter told us, “a chef by profession whose family fled [Palestine] in 1948. He set up workshops throughout Germany and taught German women how to prepare the well-known Arab dish called maqluba (a rice, meat and vegetable casserole shaped like a cake). In the study workshops he established throughout Germany over 20 years, Schwarz collected hundreds of thousands of euros and donated the money to further the dream that excited him and instilled him with hope: bilingual schools that educate toward Jewish-Arab coexistence.”

In the coming years, we’ll find out which trend is stronger: the systematic incitement of Israeli leadership against its Arab citizens or the aspirations of thousands of Jewish and Arab parents to ensure a peaceful future for their children.