Israelis remember Rabin, but many reject his legacy

Educators, especially within the national-religious sector, debate whether Rabin Memorial Day should be dedicated to his political legacy or to tolerance and coexistence. 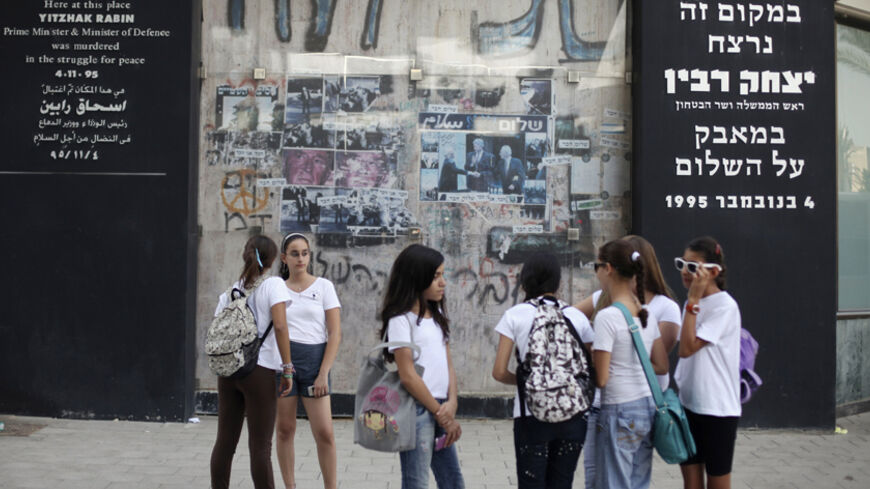 Israeli schoolchildren stand next to a memorial marking the site where Prime Minister Yitzhak Rabin was assassinated in Tel Aviv, Oct. 20, 2010. - REUTERS/Nir Elias

As terrorists undertook another deadly hit-and-run attack in Jerusalem on Nov. 5, Israeli schools marked the 19th anniversary of Prime Minister Yitzhak Rabin's assassination. A memorandum by the Ministry of Education's general director noted that the day “provides an opportunity to discuss the importance of tolerance, understanding and cooperation between all sectors of society.” But following this, lesson plans distributed to principals and teachers were sharply criticized for failing to deal with the assassination itself, the assassin's identify and the environment that led to the assassination, focusing instead on some amorphous concept of “tolerance” and the figure of Rabin as an “Israeli patriot.”

Dealing with the issue of tolerance is especially relevant in Israel in 2014, with some people in an uproar over the so-called Rabin festival and even expressing a modicum of support for the assassin, Yigal Amir. A survey conducted by the Mako news website found that some 50% of right-wing voters are not sure that Amir assassinated Rabin, and that 14% of the public believes that he should be released from prison.

“Some parents are opposed to our educational activity,” said Shimon Avichezer, principal of the mixed secular-religious school Keshet. On this day, its eighth-grade class participated in a special activity at the joint Jewish-Arab school Hand in Hand. “One mother told us that it would be more important to describe what the Palestinians are doing to us,” said Avichezer.

“Obviously we don’t have parents like that,” said Arik Spaorta, principal of Hand in Hand.

“We have a very diverse background, in terms of class and culture,” Avichezer continued, “and you might hear a student say ‘Death to the Arabs!’ In previous years, some students refused to participate in ceremonies commemorating Rabin, but we are also showing insensitivity when there are some children for whom the very name reflects left-wing positions that they oppose. We have to find a way for them to connect with this ceremony, too.”

The day marking the 19th anniversary of Rabin’s assassination began at the Keshet school with a ceremony in which Avichezer, who's orthodox, quoted former Chief Rabbi Ovadia Yosef condemning the murder. The students then participated in various activities, including a meeting with settlers, a tour along the separation fence and a meeting with refugees in south Tel Aviv.

The Hand in Hand school made a conscious decision not to have a ceremony. “We thought that an intense experience revolving around pluralism and openness would be more meaningful,” explained Spaorta. The murder and Rabin’s legacy are studied as part of the history and civics curricula. Students learn who Rabin was, as well as who the assassin was and from where he emerged.

Students from both schools ran around together, making noise, as one would expect from 13-14-year-olds. They are having a special treasure hunt that focuses on the importance of tolerance, filling out questionnaires that ask things such as “Who listens to Beyonce?” to show how similar we all are, and breaking into groups to interview one another.

“We are against violence and for democracy,” he said. “We're all guilty, and we must all take account of our actions.” In response to the claim that the assassin emerged from the right, he said, “There are those who will say that the aggressive tone was first set in actions like the 'Altalena Affair' [a ship of the pre-state underground Irgun, bombed by Israeli forces in 1984]."

At the beginning of the ceremony, students from both schools stood on stage reading extremist slogans representing both sides of the political spectrum, from “Try the Oslo criminals!” to “Stinking fascists!”

“The ceremony was created by students from both schools and reflected their positions,” said Dafna Baruch Menashe, the principal of the Beuer school. “We are not all identical, and even within the schools, there are divergent opinions among the students. The essence of today’s activities is to allow many different voices to be heard. When faced with extremist and racist voices, the only way is to engage in dialogue.”

Rabbi Jeremy Stavisky, the principal of Himmelfarb, took an even more strident position. “This ceremony is not about Rabin’s legacy or whether Oslo was good or not,” he said before the event commenced. “It's not the school’s mandate to be political. Our objective is to clarify that even if we do not agree with Rabin's path, political assassination destroys the human fabric of society.” Stavisky made it clear that he will mention Amir and the environment from which he emerged, not least because “I myself am ashamed. I know that there are students who identify with Amir and think that the murder was justified. The second intifada only strengthens that argument. We must confront these claims. It is a mistake to turn the memorial day into a day celebrating the left. It should be a day devoted to combating violence in general and political violence in particular.”

Some of his students expressed themselves as if they are quoting from a memory sheet. Two 10th-graders, Itai and Malachi, said the commemoration could be toned down, but it's still forbidden to assassinate the premier. "He is our representative, even if we don’t agree with his opinions.” Itai added: “It is possible that, in retrospect, the assassination was also beneficial because the Oslo Accord would have led to something bad. Nevertheless, murder is still forbidden.” He said that he knows people, some of them friends from school, “who say that they would have done the exact same thing as Yigal Amir.”

The principals of the schools agreed that students who did not want to participate would not be required to attend the ceremony.

Other students noted that three boys were abducted and killed this summer and wondered: Why is there no ceremony for them? Their feeling: Enough already! It’s the same thing every year. Rabin shouldn’t have been assassinated, but he shouldn’t have done what he did, either.