Kurdish Sinjar offensive too late for some Yazidis

Whatever the outcome of the battle of Sinjar, it will take a while for Yazidis to regain confidence in the peshmerga, whom they blame for abandoning the town to the Islamic State. 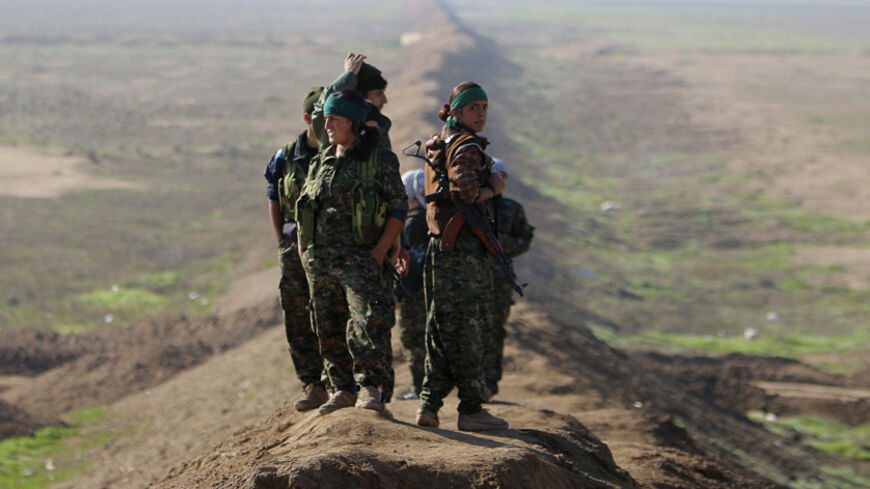 Female fighters from the Kurdish People's Protection Units stand near the border between Syria and Iraq, close to the Iraqi town of Snoun, Dec. 22, 2014. - REUTERS

MOUNT SINJAR, Iraq — Latif Alo is a Kurdish fighter in his early 40s heading toward the town of Sinjar to fight. Driving along the only road leading to the town, Alo has become restless to reach the front line, where fierce fighting is continuing between Kurdish forces supported by US-led coalition airstrikes and Islamic State (IS) militants. He's on a mission, with an old BRNO rifle inherited from his father and a leather bullet vest around his waist.

"I have come here to fight Daesh," said Alo, as smoke rose from the town at the southern foot of the mountain over which the boom of airstrikes reverberated. “They took many of our girls. Our honor has been violated. I have come back here to free them."

During the third week in December, Kurdish peshmerga backed by airstrikes managed to claw back more than 3,000 square kilometers of the Sinjar area in less than 48 hours. Iraqi Kurdish officials hailed it as the biggest victory yet in the global war against Islamic State.

According to a report by Amnesty International, the victory, however, may have come too late for many Yazidis, who have suffered "unparalleled brutality" at the hands of IS members after they overran Sinjar in the summer. With hundreds of Yazidis slain and many women and girls still unaccounted for, more will be needed to restore the minority's confidence in the peshmerga, who had been responsible for protecting them but failed.

The Yazidis ordeal began in August, when peshmerga forces came under attack from IS in Sinjar and withdrew, leaving thousands of Yazidis at the mercy of the extremist group, which considers Yazidis to be devil worshippers who deserve to be killed, enslaved or converted to Islam.

Those who could fled to the arid mountains in the scorching heat of summer. Their plight prompted US President Barack Obama to authorize the first airstrikes in Iraq since US troops withdrew in 2011. Kurdish fighters from the People's Protection Units (YPG) active in neighboring Syria came to the Yazidis' rescue along with the Kurdistan Worker's Party (PKK), evacuating thousands to safety and establishing a presence on the mountain.

A 26-year-old Yazidi volunteer who introduced himself as Abu Malek is one of those who escaped to the mountain in August. He recently returned after the siege of the mountain was broken to help retake the town of Sinjar. "We are with whoever defends Sinjar. The PKK played a big role. The people of Sinjar like the PKK most of all. They liberated thousands of families in exchange for nothing."

In one of the villages on Mount Sinjar, some 10 freshly dug graves of YPG fighters on a hill overlooking a valley serve as testimony to the price the Kurds are paying in this fight.

Sinjar has also been politically damaging for the Kurdistan Democratic Party (KDP), which had been the most popular organization in the area and responsible for protecting it. Many Yazidis now see it as having betrayed them.

Kurdish officials say there was no way they could have prevented IS from taking Sinjar because they had only old weapons, while the militants had plundered arms depots abandoned by the Iraqi army when they captured Mosul in June. At least one KDP peshmerga stationed near Sinjar town on the day IS attacked thinks the tragedy could have been averted.

"I swear, if we fought back against Daesh, they would never be able to seize this area," he said, speaking on condition of anonymity. "We would have defeated them had we put up resistance."

Flanked by two of his sons and the top echelons of his party on Mount Sinjar on Dec. 21, Kurdistan Regional Government (KRG) President Massoud Barzani, also head of the KDP, vowed to free Sinjar soon and defeat the “enemies of humanity.”

"From this defiant mountain, I want to salute the brave peshmerga," said Barzani, who has personally overseen the recent Sinjar offensive. "With this operation, the dignity of a beloved section of our society has been restored."

Injured peshmerga fighters from the town below are brought to the summit for treatment in a makeshift clinic. Ambulances are on standby to rush the wounded to the hospital. Bayan Station, the mouthpiece of IS, said Dec. 25 that peshmerga had been attacked by mortar fire and missiles in Sinjar.

Haji Najm Hussein, a member of the peshmerga force who spent some 60 days on Mount Sinjar, said they are ready to sacrifice their lives to defeat IS. "We are ready to pay with our blood in this fight if [the international community] supports us with their aircraft and weapons."

Despite the aerial bombardment and ground offensive by Kurdish and Yazidi forces, IS continues to hang on in Sinjar town, which sits on a road connecting their stronghold of Mosul to the east with the rest of their self-proclaimed caliphate in Syria.

Since the operation to free Sinjar got underway, there have been reports of mass graves being found in the area. Amnesty International has accused IS of committing crimes against humanity and war crimes against the Yazidis. "Many have been subjected to torture and ill-treatment, including rape and other forms of sexual violence, and have likewise been pressured into converting to Islam," it reported.

Around 8,000 displaced Yazidis are living in camps on Mount Sinjar in trying conditions, but they are glad to be close to their homes, to which they hope to soon return.

As planes and drones circled overhead, 17-year-old Base Sino sat in a tent beside her mother, who was preparing flour to make bread for the family. "Daesh is bad. They killed people, and they stole our honor," said Base, who has been living in a camp for five months, surviving on bread, water, rice and pasta. "I don't know when Sinjar will be freed, but I want to go back to my village."