Prominent religious authorities in both Qom and Najaf have called on political leaders in their countries to improve their relations with Saudi Arabia after the latter took a strict stance against Salafist jihadism. 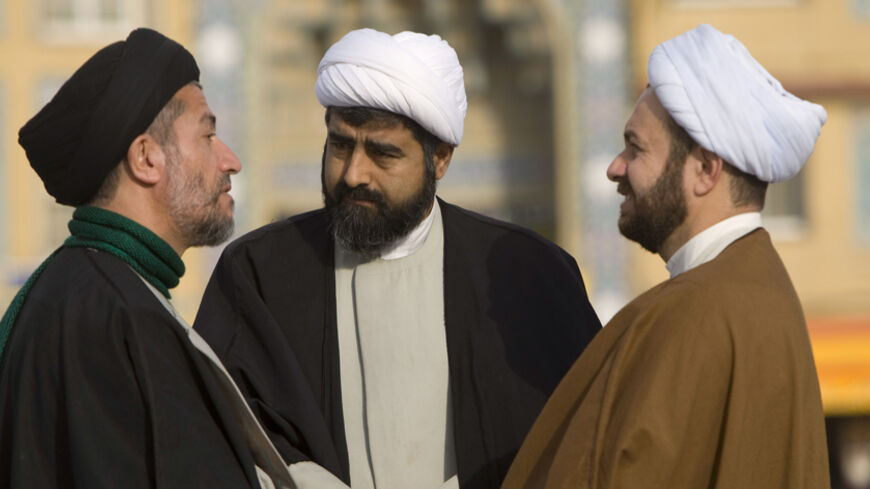 Clerics speak on the campus of the seminary in Qom, Feb. 3, 2009. - REUTERS/Caren Firouz

Clerics and religious institutions in the Middle East can play a dual role in society, either pouring oil or water on the flames of conflicts.

Prominent religious authorities in Iran's Qom and Iraq's Najaf have simultaneously called on the political leaders in their respective countries to improve relations with Saudi Arabia. The authorities stated that this move would be in the interest of all Muslims and would unite them in their struggle against terrorism and religious extremism. The request followed Saudi Arabia's adoption of a strict stance against Salafist jihadism, and pledging to reform domestic and foreign policies.

Sheikh Wahid Khorasani, a top religious authority in Qom, said on Dec. 3 it was necessary for Iran to improve relations with Saudi Arabia. The message was addressed to Akbar Hashemi Rafsanjani, president of the Expediency Discernment Council of the System in Iran, and was delivered by Seyed Taha Hashemi. Sheikh Khorasani said that Rafsanjani must travel to Saudi Arabia to improve ties and reach an agreement. Khorasani said that this is in the best interest of the Iranian nuclear issue and the Islamic world, adding that Rafsanjani is the only one who can play this role now.

Al-Monitor learned from a religious source close to Ali al-Sistani in Najaf that Sistani has a similar vision regarding the necessity of a rapprochement with Saudi Arabia, since both countries face the common threat of Salafist jihadism as represented by the Islamic State (IS). Iraqi President Fouad Massoum visited Najaf Nov. 11 to meet with Sistani before embarking on a formal visit to Saudi Arabia. Sistani praised the Iraqi government’s efforts to improve its regional relations and called for the strengthening of ties with all neighboring countries. The Saudi king praised Sistani’s great positions, and expressed his wishes for further unity and consistency among the different components in Iraq.

Rafsanjani has criticized in past years the icy relations between Iran and Saudi Arabia. Since both countries represent the biggest economic, religious and political powers in the region, Rafsanjani has stated that they should meet in accordance with their common interests instead of continuing such hostile relations, which will result in losses for the entire region. Rafsanjani expressed his readiness to go to Saudi Arabia and meet with the king to reach an agreement regarding different regional issues. However, his only condition was to be officially delegated by the Islamic revolution’s leader in Iran, so he could guarantee the implementation of the agreement that would be reached.

Rafsanjani successfully played this role in the past when he was president, just like his successor Mohammad Khatami. Rafsanjani even tried to revive this role under Mahmoud Ahmadinejad's presidency, yet the ruling party derailed such efforts by spreading false rumors about the Saudi government abusing Iranian officials at the airport, thus halting any rapprochement.

Improving relations with Saudi Arabia is an important request among the hawzas, or Shiite seminaries, in Qom and Najaf, despite the state of anger in the Shiite community following the Saudi death sentence of Shiite preacher Sheikh Nimr al-Nimr in October 2014. However, clerics believe that evoking differences between the two countries will not prevent Nimr's execution or improve the situation of Saudi Arabia's Shiite minority. In addition, any agreement could help reduce the price of oil, as Saudi Arabia could potentially reduce its oil exports and raise barriers in the nuclear compromise between Iran and the West, according to a statement by Ayatollah Fadel Mabdi, a prominent cleric in Qom.

In another initiative to express the hawzas’ desire to cooperate with Saudi institutions to fight terrorism, Najaf participated in a November 2014 conference in Vienna at the King Abdullah Bin Abdulaziz International Centre for Interreligious and Intercultural Dialogue, titled "United Against Violence in the Name of Religion." Seyed Jawad al-Khoei, founding member of the Iraqi Council for Interfaith Dialogue in Najaf, attended the conference. He said that he was pleased to have participated in the meeting and called for an agreement “based on humanitarian, moral and religious commonalities that bind us, and to point out the failures that allowed extremism, fanaticism and rivalry to infiltrate our ranks, which are trying to speak in our name.”

Shiite religious establishments in Qom and Najaf not only do not mind improving relations with Saudi Arabia — they are also calling for it. This opens the door for accelerating a rapprochement process by resorting to moderate clerics who are trusted by both sides.