A conference in Iran aims to position the country as the leading fighter against terrorism in the region instead of foreign troops. 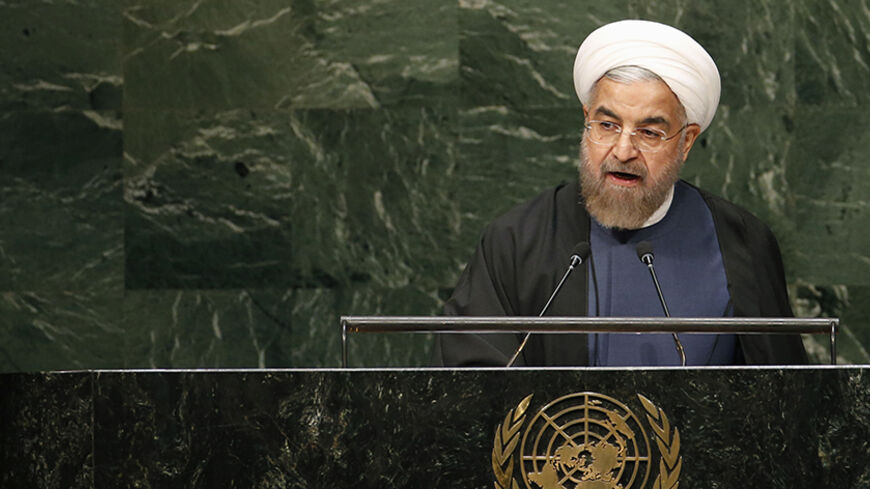 Tehran was the scene of fresh diplomatic maneuvering this week as the Foreign Ministry’s Institute for Political and International Studies (IPIS) sponsored an anti-terrorism conference.

The two-day conference, dubbed the World Against Violence and Extremism (aka WAVE), was attended Dec. 9-10 by representatives of more than 40 countries.

Tehran's decision to hold the WAVE conference follows Iranian President Hassan Rouhani's proposal of the WAVE initiative in his first address to the UN General Assembly in September 2013.

The decision also comes against a backdrop of the growing threat of violence from extremist groups such as the so-called Islamic State (IS) that has seized huge swaths of territories in Iraq and Syria.

At the opening session of the conference, Rouhani called for a regional response to the threat posed by IS militant groups in Iraq and Syria. “If countries in the region agree, they could eliminate anti-Islamic groups like Daesh [IS] and liberate thousands of men, women and children who have lost their homes,” Rouhani told the participants of the anti-terrorism conference.

“In this case, there would be no need for the presence of foreigners," he said.

Iran’s concern about the presence of foreign forces in the region comes as US miilitary officials have recently announced that US allies were ready to send some 1,500 security personnel to Iraq to help Baghdad in its fight against the militants.

A US-led coalition, which includes five Arab states, has carried out hundreds of airstrikes on IS positions in Iraq and Syria since August.

Iran, which has not taken part in the coalition, said it was “very serious in fighting extremist groups” and insisted that the root cause of extremism like that of IS “can’t be defeated by airstrikes alone.”

Amir Hossein Zamaninia, a senior adviser to Rouhani’s office, said, “The WAVE conference is in fact the beginning of a new international coalition against extremism.”

“Iran is serious about combating extremism and we’ll cooperate with all countries that have fallen victim to extremism and those who are serious in fighting the militants,” he said.

Also on the first day of the conference, Iraqi Foreign Minister Ibrahim al-Jaafari praised Iran for rushing to help the Arab country to fight against the IS terrorist group long before the United States began to form a coalition against IS.

“Iran stood by Iraq before the formation of the international coalition against IS,” Jaafari said in an address to the conference Dec. 9.

He also stressed that Iraq and Syria should be given the assistance in the battle against the militants, but at the same time rejected the idea of foreign boots on the ground in their territories.

The former prime ministers of France and Norway and the former president of Pakistan, Asif Ali Zardari, were also among the main speakers of the event.

In his address, France's Dominique de Villepin hailed Iran’s efforts to establish justice throughout the world and reiterated the need for “unity of regional countries in the campaign” against the IS terrorists.

Former Norwegian Prime Minister Kjell Magne Bondevik, for his part, stressed his disappointment about “rising Islamophobia” and talked about the root cause of extremism at the conference.

Bondevik said in Europe, many “young citizens with Islamic backgrounds can’t get integrated into the societies” in which they’re living.

“Humiliation, occupation, nondevelopment and poverty,” he said, lead to extremism, and he insisted that governments must win the battle of hearts and minds to succeed in their battle against terrorism.

Iran, which sits in the midst of one of the most volatile yet most geopolitically strategic regions in the world, sees itself engulfed by crisis-hit neighboring countries such as Iraq to its west and Afghanistan on its eastern borders.

In that sense, experts say Iran’s initiative to hold the anti-extremism conference is an indication that Tehran wants to demonstrate that it can take a leading role in solving regional issues.

Adnan Tabatabai, a Berlin-based political analyst on Iran's domestic and international affairs, however, said for WAVE to become not just another global war on terror, this initiative must go far beyond “military and security cooperation and bring to the fore structural, socioeconomic and durable political strategies.”

“Hosting this conference is a huge responsibility for the organizers. The very first conference will have to show tangible and concrete outputs,” he added.

Abdulhamid Dashti, the chairman of Kuwait’s Human Rights Committee who also attended the event, called the WAVE conference “a historic step by Iran at a very important time.”

“Regional countries can defeat the extremists if they unite without the need for foreign troops,” he said.

Reforming the educational structures, especially in religious centers, banning all forms of support to extremists including financial, logistical and facilitating their movement, encouraging inter-religion dialogues and greater investments for ensuring sustainable development in the least developed countries of the world were among the shared solutions proposed by attendants.

Iranian Foreign Minister Mohammad Javad Zarif blamed the violence and extremism in the region on the “wrong policies of the West.”

The international community and all regional players have to recognize violence and extremism as the No. 1 threat to world peace and global stability, Zarif said in his address to the concluding session of the conference in Tehran, IRNA reported.

At the end of the event, a closing communiqué was issued. The participating foreign ministers, former high-ranking officials, parliamentarians, professors, researchers and NGO representatives of more than 40 countries from around the globe voiced their support for the Iranian president’s proposal.

“Wars and armed struggles can lead to further escalation of extremism and aggression, wasting more lives, and disturbing the peace and stability of the human societies,” they stressed.