The Tunisian government is taking a number of steps to prevent radicalization and to counter religious extremism in the country. 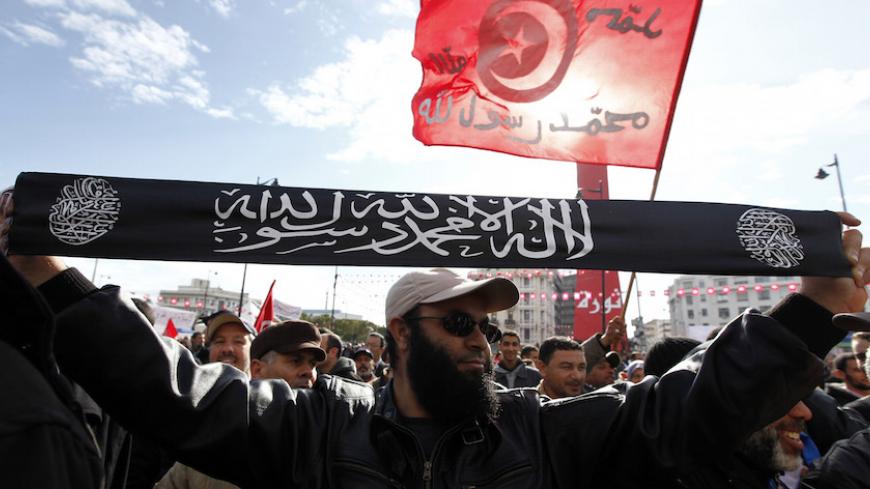 A man from the Salafist faction holds up a banner on the second anniversary of the Tunisian revolution at Avenue Habib Bourguiba in Tunis, Jan. 14, 2013. - REUTERS/Anis Mili

TUNIS, Tunisia — The March 18 attack on the Bardo National Museum that resulted in the deaths of 24 people, including the two gunmen, highlighted the issue of internal security threats to Tunisia. Even before the attack, however, the prevalence of Tunisian fighters in the ranks of the Islamic State (IS) had drawn attention to the country’s struggle with radicalization following the 2011 revolution.

While the struggle is not new, the government is now emphasizing its efforts to increase security and counter radicalization. So far, security operations against militant cells and the introduction of a new anti-terrorism bill in parliament have been the centerpieces of this effort. In addition, the Ministry of Religious Affairs has been working to bring back under its control those mosques that harbored extremist imams and networks after the revolution. Part of its effort involves reinstating ministry-sanctioned leaders in these mosques.

While these moves represent initial steps, parliament Speaker Mohamed Ennacuer, during remarks introducing the anti-terrorism bill April 17, called for a national strategy to address the root causes of radicalization in the country. "The organic anti-terrorist law is not enough to eradicate terrorism," he later told journalists. To supplement the steps that have already been taken, the government is planning to establish an anti-terrorism commission and hold a national conference, tentatively scheduled for September, to devise a comprehensive strategy for preventing violent extremism and radicalization.

Abdessatar Badr, chief of staff for the Ministry of Religious Affairs, told Al-Monitor that in the chaotic period immediately following the revolution, more than 1,000 of Tunisia’s approximately 5,300 mosques slipped from the ministry's control. Many of these mosques came under the influence of groups espousing extremist interpretations of Islam. “These people accused non-Muslims of being heretical,” Badr said, noting that Tunisians were included among the alleged heretics. In addition to the unregulated mosques, Badr said, close to 200 new mosques built without a license also became centers of radicalization.

Alaya Allani, a professor specializing in Tunisian Islamism at Tunis' Manouba University, said that at the same time about 3,500 charities associated with political Islamist groups or Salafist organizations were founded. Two hundred of them were associated with the Salafist group Ansar al-Sharia.

Some of the more radical of these associations received large amounts of funding from Qatar and private individuals in Kuwait and Saudi Arabia, Allani told Al-Monitor. “The main reason why these associations had a lot of money is because they were recruiting fighters to Syria,” he said. According to Allani, some of the associations also set up kindergartens and schools to teach radical interpretations of Islam as well as establishing training camps in western Tunisia, on Mount Chaambi, close to the border with Algeria.

The government did not intervene until a group of protesters, including Salafists, stormed the US Embassy in September 2012. The government arrested a number of Salafist leaders on charges of incitement to violence and began cracking down on Ansar al-Sharia activities. The crackdown intensified following the assassination of two secular politicians in the winter and summer of 2013 that thrust Tunisia into political crisis. The government blamed Ansar al-Sharia for the killings and outlawed the group in May 2013. A few months later, in August, it designated Ansar al-Sharia a terrorist organization.

“During this period, these organizations were able to establish an infrastructure for jihadism in Tunisia,” Allani said. Thus, the stage was set for Tunisia’s struggle with radicalization.

Al-Qaeda-linked militants in Mount Chaambi carried out their first attack against Tunisian security forces in April 2013, injuring two soldiers. A second attack in July killed eight soldiers and marked the beginning of a low-level but persistent campaign that has resulted in the deaths of more than 70 security personnel, Allani said.

By mid-2013, the high number of Tunisian foreign fighters in Syria had begun to attract international attention. It is now estimated that around 3,000 Tunisians have gone to fight in Syria and Iraq, many in the ranks of IS, and others are fighting with militant groups in neighboring Libya.

The Tunisian Ministry of Interior says that it has stopped around 12,500 people trying to leave for foreign battlefields since the government led by the moderate Islamist Ennahda began its crackdown on radical activity in 2013. The Nidaa Tunis-led government that took power after winning elections held Oct. 26, 2014, has intensified security operations against extremists cells. More than 880 suspected militants have been arrested since the government took office on Feb. 6.

Between 2013 and 2014, almost all of Tunisia’s mosques were brought back under the control of the Ministry of Religious Affairs. Badr said that today, there are around 53 mosques not yet fully under its control. The ministry inaugurated a program to register unlicensed mosques, and of the 187 that had been built illegally, 25 received government licenses. Badr said the Ministry of Interior is working to dismantle the rest.

“These were urgent measures that were taken,” said Mohamed Jalel Ghedira, a Nidaa Tunis parliamentarian. “But we still need to develop a strategy for prevention.”

Ghedira told Al-Monitor, “Our objective is for every person and every structure to have a role in counterterrorism.” The proposed anti-terrorism commission is supposed to bring together a number of ministries to devise a national strategy for the prevention of radicalization. At the September conference, ministries will present their ideas on how to combat radicalization and violent extremism and receive input from civil society, Ghedira said.

Despite the initial steps taken by the government, Mohamed Haddad, president of the Arab Observatory for Religions and Freedoms and UNESCO chairman of Comparative Studies of Religion at the University of Tunis, is skeptical about the effectiveness of the national program. “This national program is something to be said in words, but in reality it will not happen,” Haddad said. He believes the government lacks sufficient vision to carry it out.

Sayida Ounissi, an Ennahda parliamentarian, struck a more optimistic tone. “I strongly believe that if we ensure public liberties, rule of law and make people feel that they belong to this country, we will ensure the defeat of all those who instrumentalize people's frustration … to enroll them in radical groups,” she said.