The Houthi takeover of the Yemen port city, the tribe's strong ties to Iran and its latest contacts with Palestine Islamic Jihad have both Israel and Saudi Arabia worried. 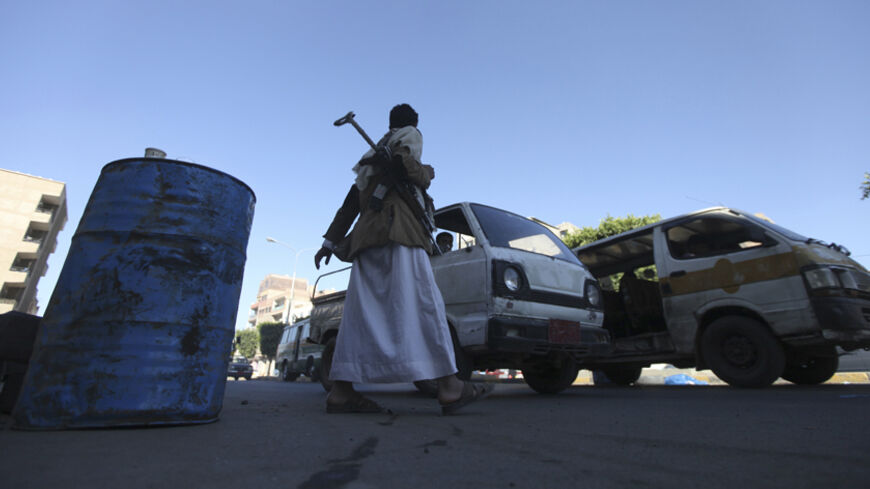 A Shiite Houthi rebel walks at a checkpoint in Sanaa, Dec. 11, 2014. - REUTERS/Mohamed al-Sayaghi

On Dec. 5, Ahmed Barakeh, Palestine Islamic Jihad's representative in Yemen, met with the leader of the country’s Houthi rebels. What do the two have in common? And why should this meeting concern us?

The common denominator of these two organizations is that they are both supported, militarily and politically, by the regime in Iran. Their meeting is an expression of this connection.

Islamic Jihad, an Iranian creation, remains the Palestinian terror organization with the closest ties to Iran. When Tehran decided to disregard the Oslo Accord in 1994, it was Islamic Jihad that launched the terrorist offensive within Israel, and Hamas joined it later on. To this day, the organization is funded and operated by the Islamic Revolutionary Guard Corps' Quds Force.

The Houthis, a Shiite tribe, control the north of Yemen. Their militia is trained and equipped by Hezbollah, whose strings are also pulled by the Iranians. For several weeks, the Houthis have been expanding their foothold in Yemen after defeating the regime’s army and the Sunni militias supported by al-Qaeda. Their biggest takeover was of the Yemeni port city of Hodeida and the shoreline toward the southwest coast of Saudi Arabia and the Ras Isa marine terminal.

This takeover is of great strategic importance. For the first time, Iran has a foothold in the southern gate of the Red Sea, literally on the Bab El-Mandab Strait, which separates Asia from Africa. The western coast of Yemen is also adjacent to the western coast of Saudi Arabia, with all its strategic facilities, posing a double threat: to freedom of movement in the straits and to Saudi security.

As we know, the Iranians are believed to be engaged in political and military subversion in Saudi Arabia’s eastern regions — including the coast — through the Shiite minority there. Now they may be jockeying to open a second front on the country’s western side.

For Saudi Arabia, a Houthi takeover of western Yemen, while al-Qaeda controls the country’s center and eastern areas, constitute a clear and present danger. Israel also cannot remain indifferent to the new Iranian stronghold on the seaway that connects it to Africa and Asia.

What does this development mean from Israel’s point of view? First, the need for security coordination with Saudi Arabia has increased. Even if covert channels exist for this kind of cooperation, the new situation is likely to warrant a more visible and pronounced relationship. But in light of the way Israeli governments have rejected the Arab Peace Initiative so harshly, and of the policies of the current government about the Palestinian issue, the chances for this are negligible. Another Israeli security interest is thus sacrificed on the altar of maintaining the status quo in the West Bank.

But there is one thing the United States can do. Opposite Yemen, on the other side of the straits, lies Eritrea. Over the last decade, the United States has espoused a policy designed to isolate and weaken the country. The wisdom of this policy should be reconsidered, given the new regional configuration. Eritrea is not a Jeffersonian democracy, but neither are the vast majority of African states. Now is the time to take Eritrea out of its isolation and allow it to rejoin the family of nations. We must remember that radical Islam has no foothold in Eritrea, and religious coexistence is a stable force there. With murderous Sudan to its north and the new Yemen to its east, Eritrea can fill a positive role in the Red Sea.