Hamas officials say the word “terrorism” is a politicized Western term and there is no international consensus, which is why it won’t label the Islamic State a terrorist group. 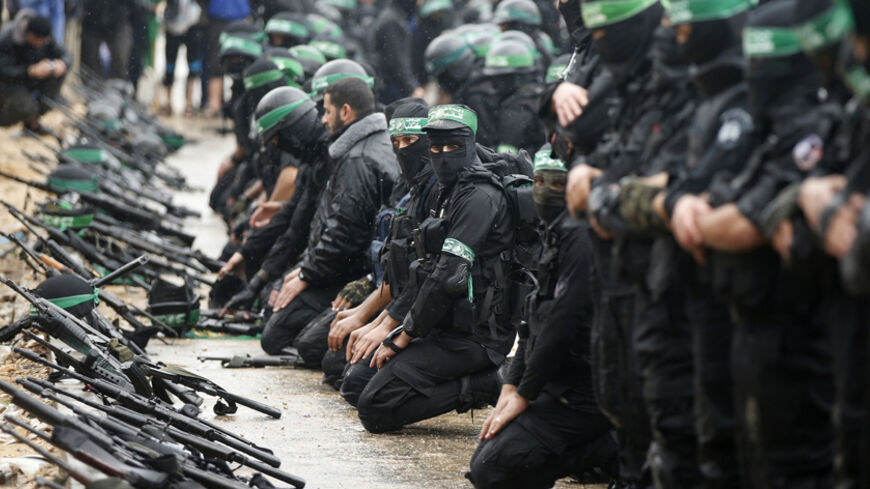 GAZA CITY, Gaza Strip — The first clash between Hamas and Islamic extremist groups occurred in August 2009, before the emergence of the Islamic State (IS). Back then, the security forces affiliated with Hamas stormed into the Ibn Taymiyyah Mosque and killed Abdul Latif Moussa and 16 of his followers, following his declaration of the “Islamic Emirate in Jerusalem.” Hamas fought against extremism, bombed the mosque and killed those espousing the same Islamic ideology.

Five years later and the threat of Islamic extremism has emerged in the Gaza Strip once again. It was not long before IS announced its presence in Gaza on Nov. 2. Shortly after, two consecutive blasts rocked the French Cultural Center and the homes of Fatah activists during the past three months. A statement made in the name of IS claimed responsibility for the cultural center’s blasts. However, Hamas has yet to issue a statement condemning the group and has yet to denounce terrorism.

Hamas leader Ahmed Youssef told Al-Monitor, “There is no proof that IS is present in Gaza. Why would we condemn IS and the Salafist movement, when there is nothing to prove their involvement in the explosions? However, should it turn out that IS was actually behind the blasts, we will certainly condemn it.”

Hamas spokesman Sami Abu Zuhri justified Hamas’ lack of condemnation, saying, “There is no definition of terrorism for us to denounce its acts. It is a term used by many countries for political purposes.”

Abu Zuhri told Al-Monitor that there is no organization operating in the name of IS in Gaza. “A few young people are influenced by this ideology, as many Arabs and Muslims have developed a deep sense of injustice at the hands of international parties,” he said.

Abu Zuhri stressed that Hamas is moderate and does not believe in any extremist ideology, yet it is not hostile toward those that did not offend it. The problem does not lie in espousing different ideologies, but rather in about those who try to take the law into their own hands. “We judge the credibility of any organization by the extent of its effort to face the occupation forces,” he added.

Asked whether Hamas sees IS as an extremist group, Abu Zuhri said, “Hamas is responsible for the Palestinian arena and will not take any stance toward any other non-Palestinian group, as we believe that this ought to be dealt with in the concerned countries.”

The change in Hamas’ stance raises many questions. While a few years ago it fought against terrorism, today it is reluctant to take any stance. In this context, Youssef said, “We fought an insurgency at the time. We did not claim to fight terrorism.”

Al-Monitor managed to reach one of the security officers who participated in the attack on the Ibn Taymiyyah Mosque. The source spoke on condition of anonymity, given it is a matter of great sensitivity. “We didn’t have any problem with them [Salafist jihadists] as a group upholding a certain ideology. However, when they started to go out wearing explosive belts, claiming that the people and the government of Hamas are infidels, it became our duty to stop them,” he said.

“Abu Ibrahim Al-Souri [a Palestinian mujahed from Gaza] was behind the incitement. He influenced a group of young people and convinced Moussa to declare the emirate, although he was well aware that the latter was not involved in politics. We tried to prevent Moussa from declaring the emirate in his speech, but he did not heed our warnings and threatened us with explosive belts, and we all know how it ended,” he added.

The source said that the situation remained tense with the Salafist groups until clerics from Kuwait and Qatar visited the Gaza Strip in May 2013 to mediate on behalf of them, provided that they would not cause any distress in civil society or organize groups based on al-Qaeda’s ideology.

“Should any Salafist group, whether IS or any other organization, declare the caliphate in Gaza, we will strike with an iron fist,” the security officer said. He stressed that during his recent meeting with one Salafist leader, the latter said that Salafists support IS, but they will not declare it in the Gaza Strip as they do not wish to clash with Hamas.

As for Hamas’ decision not to condemn IS — although it claimed responsibility for the bombing that occurred in Gaza — the security officer said, “There is a decision not to take any stance toward IS. We are all Islamists, and it is ideologically difficult for us to condemn them as terrorists. We are accused of the same by the West and some Arab countries,” stressing that they will never join the US alliance, even in the media discourse.

If condemning IS is the current "trend" today, why does Hamas not follow suit and get the blessing of Egypt, which is closing the Rafah crossing under the pretext of extremist groups in Gaza, as 1.8 million citizens are besieged in the Gaza Strip?

“We wish stability for Egypt and we are not involved in what is happening there. We will not allow anyone to drag us into the domestic Egyptian situation. However, we are committed to the stability of all Arab countries and we condemn all crimes against innocent people at the hands of any party,” Abu Zuhri said.

Political analyst Hani Habib told Al-Monitor, “Hamas will not condemn terrorism as there is no clear definition of terrorism agreed upon internationally. Therefore, Hamas as well as other groups, are reluctant to generalize such a concept, which may include forces fighting for just causes.”

Youssef, who spent most of his life in the United States, believes that not everyone who takes up arms to fight for just causes is a terrorist. He said that Hamas does not use these Western terms, “The US used to call the Afghans who fought the Soviet Union mujahedeen, but when they started fighting against America, they became terrorists.”

He also said that if the insurgency in Syria and Iraq is seen as terror, based on the killings taking place there, then the United States and Israel, which have killed thousands of innocent people, ought to be condemned as well. “Nevertheless, we condemn all acts that fall outside the context of the international law and Islamic teachings,” he added.

Only time will have answers to all the questions in the Gaza Strip. The dramatic turn of events have changed the situation in Gaza. Indeed, after being ruled by authorities that upheld security and safety in Gaza for seven years, people are awaiting the results of the investigation committees in more than seven bombings, and wondering if terror has come to the Gaza Strip.