The French Cultural Center in Gaza has been targeted twice in two months, raising suspicions about who is behind the attacks, since the center is located near Hamas security headquarters and the unity government's Interior Ministry. 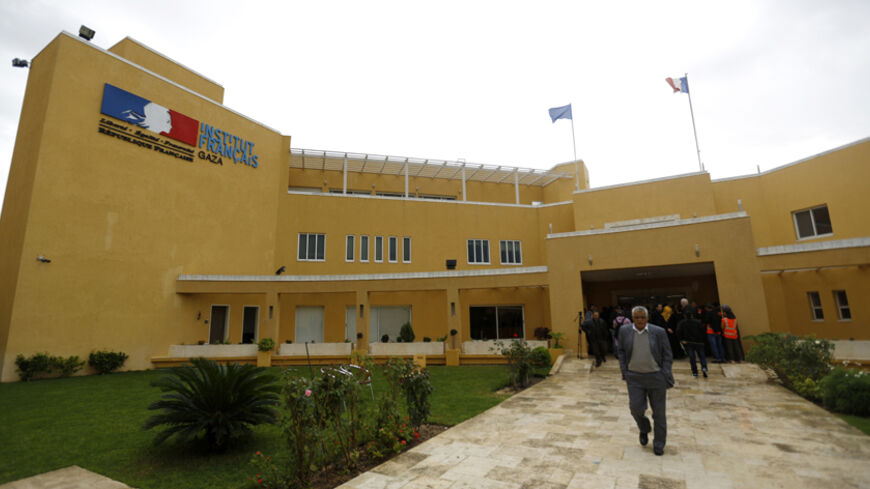 A picture taken Dec. 14, 2014, in Gaza City shows the entrance of the French Cultural Center that was slightly damaged by a bomb attack on Dec. 12. - MOHAMMED ABED/AFP/Getty Images

GAZA CITY, Gaza Strip — The blast that rocked the southern side of the French Consulate’s Cultural Center in Gaza on Dec. 12 was not as powerful as the first one that occurred on Oct. 7, when two successive explosions destroyed the fuel depot used to power the electricity generator.

Al-Monitor examined the ground floor and saw the gaping hole in the back wall caused by an explosive charge placed outside the security enclosure. The surrounding land is vacant, and infiltrating the premises to place a charge by the wall is easy. One of the French Center’s employees described this location as the “weakest security point at the center.”

It's at this exact location that the first blast occurred, when, that time around, the perpetrators jumped the fence and entered the center’s grounds. The same employee said, “No one was on duty then, except for the doorman who sleeps at the center. The security crew was on vacation; and, it would seem that the perpetrators had the center under surveillance and were aware of this.”

Soot covered the ground floor walls where the fire had spread. The damage was still being repaired, as a construction worker was mixing cement to resurface the walls. Next to him, one could see the wide-open gap caused by the new explosion in the perimeter wall.

The scene itself was somewhat alarming, as restoration work was taking place despite the insistence to target the center, and especially considering that only two months separated the two attacks.

The center is less than 200 meters (656 feet) from the Ansar 2 security compound, while the other side is bordered by the Training Directorate, which is affiliated with the Ministry of Interior and was targeted by Israeli forces during the last war on Gaza. In other words, the French Cultural Center is surrounded by dozens of security forces.

The Gaza Ministry of Interior opened an investigation into the second explosion, and stated that the first was caused by a fire in the fuel depot, knowing that a fuel tank fire could not cause the two large blasts that were heard all over Gaza City on the night of Oct. 7.

In the period that separated the two blasts, a series of other explosions targeted houses of Fatah officials, as well as a podium erected to commemorate the 10th anniversary of Yasser Arafat’s death. All those blasts occurred in a single night on Nov. 7, and statements emblazoned with the Islamic State (IS) logo claimed responsibility for them. In an interview with Al-Monitor, Hamas spokesman Sami Abu Zuhri described these claims as “mere Facebook statements.”

He added that investigations into the bombing of the French Cultural Center were continuing. But, concerning the blasts that targeted Fatah, he said, “The investigation was closed following statements made by President Mahmoud Abbas, who accused Hamas and said that he was not interested in the results of ongoing investigations in Gaza. Thus, investigation results would not be recognized.”

The French Cultural Center employee who inspected the site of the last explosion told Al-Monitor on condition of anonymity: “We found a cell phone and an empty briefcase at the scene. It is obvious that the blast was triggered remotely through the cell phone.”

When Al-Monitor entered the ground floor, we noticed that the two blasts occurred behind the cameras overlooking the center’s parking garage.

A Hamas official familiar with the progress of investigations in the center bombings told Al-Monitor, “The French Cultural Center is not cooperating with the investigations, and only surrendered camera footage after a lot of insistence on our part. Opening the files required a password — which they have yet to provide us — so that we can continue the investigation.”

Al-Monitor asked the French Consulate about this piece of information, but everyone there was reluctant to make any statements. After a lot of prodding, another employee stated, “We did, in fact, provide them with camera footage after the first explosion, but it turned out to be unusable, as a result of damage caused by the blast. It has nothing to do with passwords being withheld. In the second explosion, live, nonrecording closed circuit cameras were being used, as we are currently in the process of conducting a tender to replace the old damaged security system.”

Abu Zuhri refused to characterize the explosions as indicative of lawlessness, saying, “Lawlessness is not pervasive in Gaza. These are but isolated incidents whose perpetrators are being sought. Gaza enjoys long-standing stability and security.”

On the other hand, Hamas senior official Ahmed Youssef held the Ramallah government responsible for what he described as “lax security.” According to him, the government was not providing Gaza security agencies with their required budgets, and withheld the salaries of security employees. “This cannot be characterized as lawlessness; merely incidents that shall remain under control. Yet, the situation is volatile as problems, misery and frustration permeate society,” he told Al-Monitor.

An IS-attributed statement that spread across social networking sites took responsibility for the first bombing of the French center. This begs the question: if the perpetrators are extremist factions, then why didn’t they attack Hamas institutions and headquarters, particularly in light of the public animosity between them?

Youssef said, “That is not true. Hamas condemned the bombings and immediately opened investigations. But some are trying to send a message to the Ramallah government that this is what the Strip will devolve to if it is neglected, ignored, and if salaries are withheld.”

The blasts that targeted Fatah and the French Cultural Center stirred controversy and surprise about the deteriorating security situation during the last three months, particularly in light of Hamas’ continued rule of Gaza. The former is known for its iron fist rule, and forbidding any type of lawlessness or the presence of any other competing authority, whether family-based, Salafist or partisan.

Hamas succeeded in thwarting the efforts of all those who tried to compromise its authority throughout its rule, as evidenced by the infamous Abu Tamimah Mosque incident of 2009, or the siege of the Halas family in the Shajaiyah neighborhood in October 2007, and its violent takeover of the Gaza Strip from Fatah in June 2007.

With regard to the controversy engendered by the bombings, and in solidarity with the French Cultural Center, Khalil Abu Shamaleh, the director of Al Dameer Center for Human Rights, stated on Dec. 14 in front of reporters, including Al-Monitor: “There are accusations against Hamas that it is behind the lawlessness that pervades the Strip. To refute those claims, Hamas must thus disclose the results of its investigations.”

The French Cultural Center, which has long held art exhibits, concerts and intellectual symposia, has been closed more than two months. The second bombing threatened the existence of one of the first foreign cultural centers established in Palestine, before the first intifada.

The pertinent question is: How do these blasts recur near major security headquarters controlled by Hamas, which continues to deny any involvement, and the Interior Ministry of Prime Minister Rami Hamdallah’s unity government?