Fatah believes Hamas is behind the recent spate of explosions in the Gaza Strip in an effort to add pressure on the Palestinian unity government. 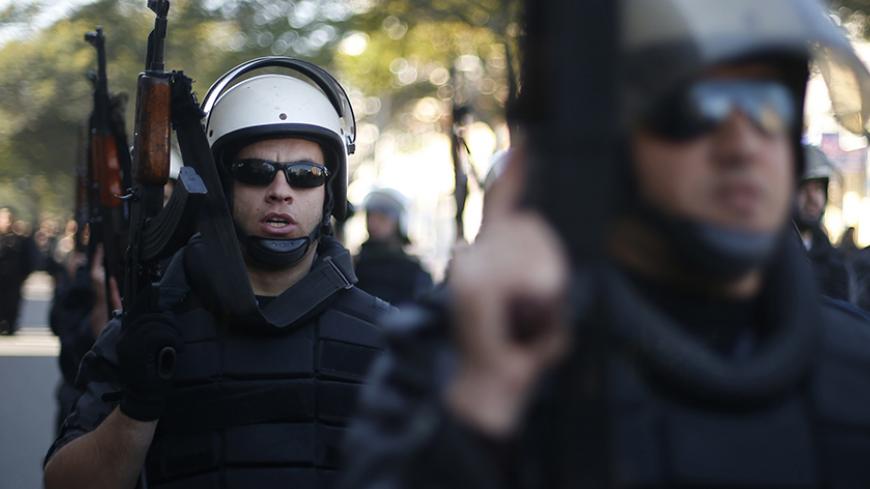 Several security incidents took place Jan. 9 in the Gaza Strip — including the bombing of a Bank of Palestine ATM in Gaza City, the destruction of the bank’s surveillance cameras in the Deir al-Balah branch in central Gaza, the bombing of a generator that provides electricity to the residence of government spokesman Ihab Bseiso and the robbery of a storehouse belonging to the telecommunications company.

These bombings were followed by phone threats to several government ministers Jan. 10, saying, “It is only you who bear responsibility for Abbas’ gang’s mockery, and before you crush the heart of 50,000 employees we will crush yours.”

Incidents such as these have been absent in Gaza since Hamas seized control in mid-2007 and tightly controlled the territory's security, which it prides itself on.

Although Hamas has abandoned the government following the reconciliation agreement, Gaza’s Palestinians know well that the existing security agencies in the Gaza Strip are still exerting their control. This has raised questions as to the extent to which Hamas is responsible for the security breaches.

Hamas spokesman Sami Abu Zuhri condemned the incidents on Jan. 9, viewing them as tampering with the Palestinian institutions and security. Zuhri demanded that security agencies unmask and bring the perpetrators to justice.

Commenting on these incidents, Mousa Abu Marzouk, deputy head of Hamas’ political bureau, told Al-Monitor: “Some want insecurity to return to Gaza and they don’t know that this time has gone forever. These security problems have no place among us, be they the insignificant threats or the condemned [acts of] bombing, destruction or robbery.”

Fatah is unconvinced by Hamas’ condemnations, instead considering Hamas responsible for the incidents, as it is the only party in charge of security in the Gaza Strip.

Walid al-Awwad, a member of the political bureau of the Palestinian People's Party, said that the recent bombings in Gaza are part of a state of chaos to turn the Gaza Strip into a fireball.

Speaking to Al-Monitor, Hamas spokesman Mushir al-Masri ruled out the possibility of “Hamas having a loose grip on security in Gaza, because Palestinians paid a high price for insecurity in Gaza under the Palestinian Authority and its security apparatus before Hamas took control of the Gaza Strip in mid-2017.”

He added: “Today in Gaza, there are national security agencies that are fulfilling their obligation toward the Palestinian people. Yet, the national consensus government is responsible for the state of the relative security decline, as they did not provide security agencies with the logistic support and operational expenses. This is preventing them from fulfilling the obligation of maintaining the security in the Gaza Strip.”

Bseiso responded to Hamas’ accusation by demanding that the incitement against the government be halted, as it causes instability. He demanded that the media war be stopped as the government is assuming its responsibility toward the Gaza Strip.

Qais Abdul Karim, a member of the PLO Executive Committee and deputy secretary-general of the Democratic Front for the Liberation of Palestine, said Hamas should unmask the perpetrators of the security incidents, assume its responsibilities and reveal who was behind the recent spate of bombings.

The demands that the perpetrators of these incidents be identified prove that Hamas, although its government resigned in June 2014, is still the first security decision maker on the ground in the Gaza Strip. Although Rami Hamdallah is the prime minister, minister of interior and minister of national security at the same time, the security staff of the government departments in Gaza are still affiliated with Hamas.

The inability of Gaza’s security apparatus, particularly those affiliated with Hamas in one way or another, to put an end to the signs of chaos may actually be a result of a decline in Hamas’ ability to impose security. Therefore, its grip on Gaza may indeed be loosening, which might suggest that such incidents may recur in the future, if groups on the ground succeed in penetrating Gaza’s security arena.

Another option would be that Hamas is turning a blind eye to the security incidents in Gaza, that they are not making real efforts to track down the perpetrators and at the same time is accusing the government of failing to fulfill its obligations toward its security agencies in Gaza. If this were not the case, the only alternative would be that Gaza is falling into chaos.

Masri, a member of parliament told Al-Monitor: “All interpretations of these security incidents are probable, as Fatah continues to deny the reconciliation, and the government escapes its responsibilities toward Gaza, which will have negative consequences on Gaza’s security situation that has never witnessed such a decline since Hamas took over nearly seven years ago.”

He added: “The ongoing siege on Gaza by the Zionist enemy, and some regional parties, as well as the failure to start the reconstruction process could be pushing Gaza toward more insecurity, which will mean that all parties neighboring Gaza pay for this chaos, not only Gaza.”

Interestingly, no groups or organizations claimed responsibility for the recent incidents, which is a departure from the norm.

A senior Palestinian official at the office of President Mahmoud Abbas, who spoke on condition of anonymity, told Al-Monitor: “Identifying the perpetrators of the incidents does not need large security investigations. Everyone in Gaza is aware that Hamas knows every single detail in the Gaza Strip and that it meticulously monitors the situation on the ground. Thus, [Hamas] is not far from these incidents and has assigned their implementation to its members to exert pressure on the government.”

In light of the worsening relationship between Hamas and Fatah, Hamas’ accusation that the government is continuing to neglect the demands of the people of Gaza for reconstruction, the provision of salaries and the opening of the border crossings, Gaza will slowly turn into a scene of "organized chaos." Hamas might be allowing this organized chaos to develop to pressure the parties besieging Hamas, and send them a warning that the movement has an on-the-ground influence that may harm them, and that the damage is not limited to Hamas alone.