As violence and general lawlessness increase in the Gaza Strip, Fatah and Hamas are accusing each other of being behind the turmoil. 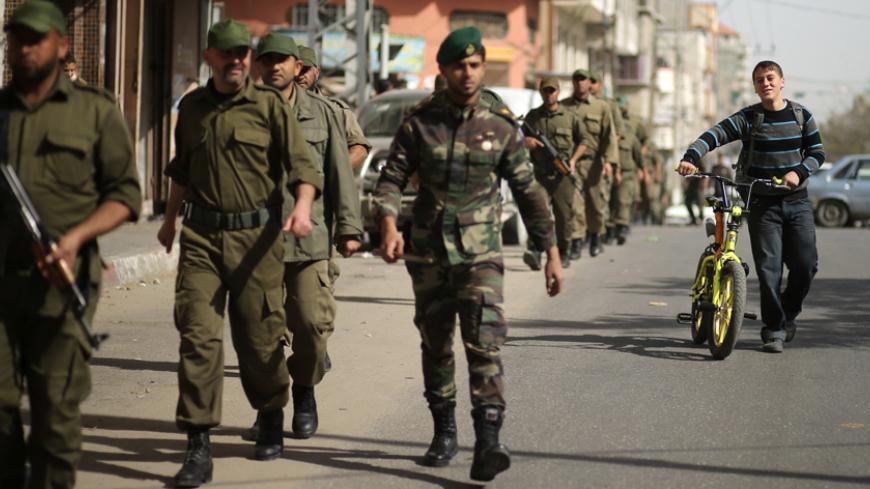 A Palestinian boy pushes his bicycle as members of Palestinian security forces loyal to Hamas march on a street in Gaza City, Feb. 10, 2015. - REUTERS/Mohammed Salem

GAZA CITY, Gaza Strip — As soon as Gaza escaped a bloody and cruel war with Israel that lasted 50 days, it entered a spiral of bombings and lawlessness. The last three months have seen shootings, bombings and local institutions stormed and robbed. The security services have made no arrests, and Gaza's citizens are now back to the years of security chaos that preceded Hamas’ takeover of the Strip in 2007.

Periodic reports issued by the Independent Commission for Human Rights show a rise in crime in the Gaza Strip since the beginning of 2015. Starting November 2014, there has been an increase in bombings, car burnings, kidnappings, theft and shootings, most notably the assassination attempt of Fatah leader Mamoun Sweidan on Feb. 16.

Al-Mezan Center for Human Rights said in a Feb. 16 press statement, “Incidents of burning property and vehicles, planting explosives and shootings by unknown persons have increased in various parts of the Gaza Strip, threatening the security of the citizens and raising the general feeling about an escalating lawlessness amid the absence of information regarding who is behind these crimes and whether the perpetrators were arrested and brought to justice. These incidents constitute a continuation of the pattern of attacks, which are continuously happening.”

Fatah and Hamas have exchanged accusations of responsibility for the security chaos. Former intelligence chief Tawfiq Tirawi, a member of the Fatah Central Committee and a resident of Ramallah, accused the former interior minister in the Gaza government, Fathi Hammad, of being behind the bombings that targeted the homes of Fatah leaders in December. Hamas, in return, accused Tirawi of being behind the attacks. Gaza's Deputy Interior Minister Kamel Abu Madi said in statements published in the Hamas-affiliated Al-Risala newspaper, “Tirawi is not innocent of what’s happening in the Strip, and the security services in the West Bank are behind much of what is happening in Gaza. Tirawi is part of this situation targeting Gaza.”

Abu Madi added, “The [Palestinian] Authority is trying to create strife and unrest in the Strip due to its policies that aim to cut off livelihoods and prevent the payment of salaries.”

The Islamic State (IS) has claimed responsibility for some of the bombings that targeted the homes of Fatah leaders and the French Cultural Center in Gaza twice, on Oct. 7 and Dec. 12. But Hamas has denied that IS is present in the Strip, despite 200 Salafists pledging allegiance to Abu Bakr al-Baghdadi during a demonstration in front of the French Cultural Center in Gaza.

Iyad al-Bazm, spokesman for the Gaza Interior Ministry, attributed the rise in crime to the lack of communication between Palestinian Prime Minister Rami Hamdallah and the leaders of the security services in the Gaza Strip, as well as the tight operating budgets of the ministry in Gaza. The ministry has had to reduce its services by at least 50%, according to Bazm.

He told Al-Monitor, “Security agencies in the West Bank seek to exploit the prevailing economic and political conditions in the Gaza Strip to fabricate crises and return lawlessness to the Gaza Strip. Despite the financial austerity plan, we are making every effort to prevent the collapse of the security establishment in Gaza.” He added, “The security incidents are mostly connected to each other. We are investigating all the cases. In many of them, the perpetrators have been caught. This will be officially declared soon.”

An informed security source told Al-Monitor on condition of anonymity that some of the recent crimes were linked to organizational disagreements between the two Fatah currents — President Mahmoud Abbas and former leader Mohammed Dahlan — and that some are attributable to lax security as a result of the non-payment of security staff.

The source said, “There are people who belong to some extremist currents, and they have links to the security agencies operating in Gaza. They carry out bombings for ideological reasons, such as the bombings that targeted the French Cultural Center. But [the bombings are done] by individuals' initiative in the absence of a strong leader and an interior minister who keeps track.”

Palestinians in Gaza are worried, both because the incidents have a negative effect on the reconciliation and reunification of the Palestinian institutions and because they delay the reconstruction process after the recent war.

Political writer Talal Okal noted that if not contained, the violence in Gaza would mainly harm the reconstruction process and the reconciliation between Fatah and Hamas, stressing that everyone will lose if that happens. He told Al-Monitor, “The bombings had serious repercussions on the reconciliation, the government and the reconstruction process, and they deepen the internal rift between Fatah and Hamas, especially since [the bombings] aimed to trigger a clash between these two movements and make them accuse each other.”