Hamas in Turkey on alert after Israeli complaint

Hamas officials in Turkey are taking precautions after Israel’s complaint to NATO against Ankara for hosting the Palestinian Islamist group, fearing that Israel might resume assassinating its leaders abroad. 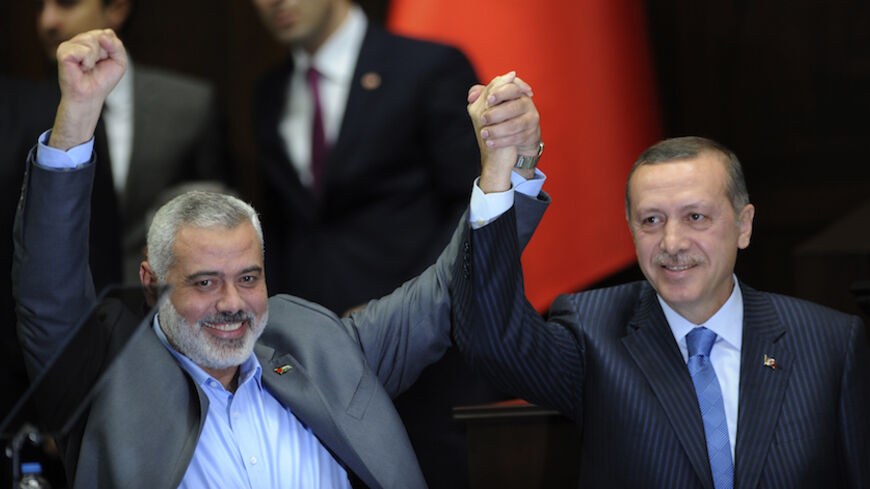 Hamas is taking Israel’s complaint to NATO against Turkey for hosting Hamas leaders seriously, concerned that it might be a prelude to a resumption of assassinations of its leaders abroad.

Israel filed the complaint Nov. 26 as the Shin Bet revealed the arrest of a military cell in the West Bank prepared to attack Israeli targets and said that the cell’s members had received military training abroad under the leadership of Hamas in Turkey.

Hamas has denied the accusations, stressing that its involvement in Turkey is limited to humanitarian and media work. Hossam Badran, a spokesman for Hamas based in Qatar, told Al-Monitor, “The accusations made by Israel against Turkey are invalid, but they stem from an Israeli desire to divert people’s attention from its failure in the Gaza war and its inability to stop the ‘Jerusalem intifada’ toward other minor issues, knowing full well that Turkey has strong ties with the Palestinian people in general and not with Hamas in particular.”

“Israel’s accusations against Turkey fall under the category of card shuffling, and the Izz ad-Din al-Qassam Brigades, Hamas’ military wing, assumes the responsibility for the resistance operations carried out against the occupation in the occupied territories. Turkey is a large sovereign state, and we do not accept to harm its sovereignty as it is only being hospitable toward some of the movement’s members,” Badran said.

The Israeli complaint deliberately focused on Hamas leader Saleh al-Arouri, who heads the movement in Turkey.

Arouri, a member of the political bureau of Hamas, has lived in Turkey since 2012. Israel deported him from the West Bank in 2010 after the end of his 18-year prison sentence. He then lived in Syria, and after Hamas’ leadership left Syria, he went to Istanbul and participated in the prisoner exchange deal negotiations. Israel accuses him of being in charge of recruiting and financing operations, as well as of planning armed operations against it.

Al-Monitor tried to contact Arouri to no avail. However, a Hamas official close to him told Al-Monitor on condition of anonymity, “Hamas is taking the Israeli threats against Arouri seriously. It is also seriously dealing with the possible resumption of assassination operations against leaders in the movement in Syria, Lebanon and the United Arab Emirates, as in previous years, although this may be irrational given that this will lead [Israel] to enter into a major diplomatic confrontation with Turkey. We are taking the necessary security precautions, as we are dealing with a state that implements the law of the jungle in hunting down its enemies.”

The Hamas official in Istanbul said in a telephone interview, “It is no secret that our stay in Turkey is becoming a sensitive issue, unlike our previous and current stays in other countries. Ankara is a member of NATO, and it has strategic ties with Washington and the capitals of the West. Hamas does not yet have a formal office in Turkey, and it is keen not to cause any harm to this country. Our activity is limited to the media and humanitarian work.”

Hamas issued a statement on Dec. 1 stating that Arouri is a well-known political leader. It said that trying to drag his name into disrepute is an attempt to distort Turkey’s humanitarian position regarding the Palestinian people and their just cause.

A former official in the Turkish Foreign Ministry who wished to remain anonymous told Al-Monitor, “Israel’s charges against Turkey are invalid, as we are establishing relations and coordinating with Hamas regarding purely political issues and we are not hiding anything. Meanwhile, we do not allow any armed activity on our territory, whoever the side may be, and the Israeli accusations made against Turkey are aimed at distorting the image of the latter and escaping the duties required from Israel to reconcile with us.”

The Turkish official told Al-Monitor in a telephone interview from Ankara, “Israel is playing an obvious game by filing a complaint against Turkey to NATO, and it knows full well that NATO is not naive to believe such false accusations whereby Turkey is covering Hamas’ military activities on its territory; Turkey is a pivotal state in the region and these accusations cannot undermine its central role, even if this is what Israel wants.”

This was confirmed by Osama Hamdan, Hamas’ spokesman for international relations. Hamdan pointed out on Nov. 19 that the relationship with Turkey dates back 15 years. Hamdan added that this relationship has witnessed clear meetings with the Turkish president and prime minister and it has served the Palestinian cause. It is still ongoing, and we are keen on preserving it.

Al-Monitor secured a copy of a report issued by the Ahrar Center for Prisoners Studies and Human Rights in Ramallah. The report states that the Israeli intelligence is placing pressure on Palestinian prisoners to make confessions condemning Arouri. The Shin Bet’s insistence on accusing Arouri of having contacts with prisoners was clear in a bid to increase the list of accusations against him.

Arouri’s biggest appearance was Aug. 20 — at the peak of the Israeli war on Gaza — when he declared that al-Qassam Brigades was responsible for the kidnapping and killing of three settlers in Hebron in mid-June during a celebration held by the General Union of Muslim Scholars in Istanbul. He also said that this operation is an achievement for the prisoners who are on hunger strike in Israeli jails, and its main goal was to exchange the three settlers with Palestinian prisoners.

Arouri’s statement regarding the Hebron operation contradicted Hamas’ announcement that it is not responsible for the operation.

The official close to Arouri told Al-Monitor, “The estimated number of Hamas members and activists in Turkey is limited to some dozens, most of whom left Syria after Hamas’ conflict with the regime about its position on the revolution, and these are mostly field staff. Only Arouri is a leading figure.”

Hamas’ official website warned Dec. 3 against the Israeli focus on Arouri in the current phase of the war on Hamas. It warned against the fact that Israel put him in the circle of responsibility for the return of military activity in the West Bank and involved him with large headlines such as the assassination attempt of Foreign Minister Avigdor Liberman and bombing operations in Israel to find a pretext to justify any operation carried out by Israel against Arouri.

Badran told Al-Monitor, “The movement is not carrying out any armed activity outside Palestine, and we apply this policy to Turkey, which is merely carrying out its duty of hospitality toward us, including to Hamas members who left Syria after the outbreak of the events, or the released prisoners who have been deported to Turkey.”

He concluded by saying, “Turkey has not taken any security or political action against Hamas on its territory after the Israeli complaint. On the contrary, the welcoming atmosphere is still the same, and we know that the hospitality duty leads us to maintain security in the host country, Turkey. We are not practicing activities that may offend it, and we are convinced that Israel's accusations against it are nothing but a tempest in a teacup, and they will not affect Hamas' solid relationship with Turkey.”