Gaza’s Ministry of Finance has imposed new taxes on imported goods without approval from the unity government, drawing criticism from industry and citizens. 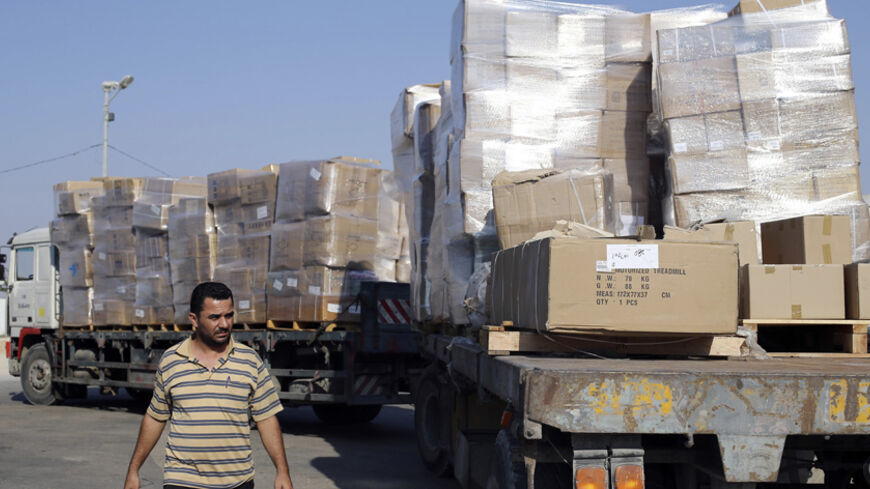 A Palestinian man walks next to a truck loaded with goods that entered Gaza at the Kerem Shalom crossing, Aug. 28, 2014. - REUTERS/Ibraheem Abu Mustafa

GAZA CITY, Gaza Strip — In a surprising move, the Ministry of Finance this month unilaterally imposed in Gaza — which is effectively controlled by the leaders of the former Hamas government — several new taxes on more than 50 kinds of goods imported into the Gaza Strip via the Kerem Shalom border crossing. These goods include medicines, clothes, food, medical and electrical equipment and construction tools.

The first of their kind, the taxes imposed by the Gaza Ministry of Finance range between 1,500 to 5,000 shekels ($381 to $1,271). Merchants, vendors and citizens condemned this measure as taxes added to their burden in the dire economic conditions plaguing the Gaza Strip.

Pharmacist Ibrahim Shaath, who's affected by the decision, said that pharmaceutical warehouses and companies informed all pharmacists in the Gaza Strip that the ministries imposed a new tax on them of 2.5%.

“There is a problem between the rulers in Gaza and the companies that import medicines from the West Bank and Israel, as this tax has been added to the total invoice value. When we asked the manager of a pharmaceutical warehouse what this percentage meant, he said that the tax represented 20% of the profit, and this is a large percentage compared to our profit margin, which does not exceed 15%,” he told Al-Monitor.

Shaath said the pharmaceutical companies in Gaza and the Union of Palestinian Pharmaceutical Manufacturers (UPPM) in the West Bank and Gaza have taken a unified decision whereby no medicine of any kind will be provided to the Gaza Strip as long as this ratio is imposed. This decision has been transmitted to all the pharmacies in Gaza.

“Since Dec. 1, no medicine has entered the Gaza Strip as the companies and the UPPM refuse to abide by this ratio, and the violators of this decision will be sanctioned by the UPPM,” Shaath added. "The measures taken in Gaza and the fact that they are different from the measures and taxes imposed on pharmacists and drug stores in the West Bank constitute a burden on us.”

Assistant Undersecretary in the Ministry of Finance and Chairman of the Board of Revenue in Gaza Auni al-Basha denied to Al-Monitor that his ministry had imposed any new tax in Gaza.

However, the action on the ground proves the opposite. The local Al-Eqtesadia weekly newspaper on Dec. 15 published a report including documents proving that the Gaza Ministry of Finance imposed new taxes on many goods that enter through the Kerem Shalom crossing from Israel.

Vice President of the Chamber of Commerce in Gaza and businessman Nasser al-Helo said the ministries in Gaza have lately imposed many new measures and fees on Gaza Strip traders.

“Among those taxes, there are fees that account for 2.5% of the total value of the medicines and medical supplies’ bill, even if this measure was taken under the pretext of collecting VAT in advance. This actually contradicts the instructions and procedures upon which the VAT system is based, and it has prevented drug companies from going to the Gaza Strip, which led to a severe shortage of many drugs,” Helo told Al-Monitor. “The ministry imposed a 20 shekel [$5] fee on one ton of cement, in light of the harsh conditions in Gaza as a result of the recent war. Then, this fee was suspended [by the Ministry of Finance]. In addition, a 4 shekel fee [$1] was imposed on gas cylinder filling, which was later reduced to 2 shekels [$0.50]. This has halted gas pumping and exacerbated the crisis that we already suffer from. A flat fee was also imposed on every cargo truck that enters through the Kerem Shalom border crossing and imports goods from Israel and other countries. A list was drafted and includes 50 major categories of goods, consisting of thousands of subcategories with amounts ranging between 1,500 to 5,000 shekels [$381 to $1,271] imposed per truck.”

Helo stressed that the ministries and education and health facilities in the Gaza Strip are facing a crippling crisis because of the lack of communication between the ministries in the West Bank and in Gaza. However, this does not justify the measures or the imposition of any new taxes or fees that burden citizens and traders.

The new taxes are directly reflected on the citizens’ purchasing power as prices of consumer goods will rise, thus exacerbating the people’s suffering. Economic analyst Maher Tabbah said that Gazans are paying the cost of political division and disagreement. So far, and six months after the formation of the Palestinian consensus government, tax laws and measures have yet to be unified between the West Bank and the Gaza Strip.

“The [consensus] government was supposed to address the different decisions, laws, legislation, measures, taxes and customs between the West Bank and the Gaza Strip, which have increased during the division period and have negatively affected the private sector, most notably the companies. Yet, until this date, this division remains present, as it has not been addressed yet, and the gap still exists between the measures in the West Bank and those adopted in Gaza,” Tabbah told Al-Monitor.

He said the gap between the tax measures in some sectors in the West Bank and the Gaza Strip was very large, despite the formation of a consensus government. “For instance, the license to own a diesel car in the West Bank costs 700 shekels [$177] in the West Bank, while it is up to 2,200 shekels [$559] in Gaza. The citizens are the only victims of these differences.”

In a brief statement to Al-Monitor, the consensus government Labor Minister Maamoun Abu Shahla said his government has decided to consider such taxes as illegal measures.

In its weekly meeting Dec. 9, the consensus government confirmed that any decisions or measures issued in the southern provinces by those who are not authorized by the ministers in the consensus government are considered void and in violation of the law. This is particularly the case of the decisions to impose fees on goods and commodities imported to the Gaza Strip, and to collect revenues, which is a violation of the law.

The government issued a statement on Dec. 9 that reads: “Any revenues collected in accordance with the law will be sent to the Treasury Single Account, and used in the Gaza Strip as determined by the government, i.e., through the finance minister or the authorized signatory.”

Despite the formation of a Palestinian consensus government, the dispute between the West Bank and Gaza is still present, which is reflected by the unilateral measures that are only adding to the suffering of citizens.