Hamas might be looking to tone down its rhetoric to translate its recent legal victory into political progress. 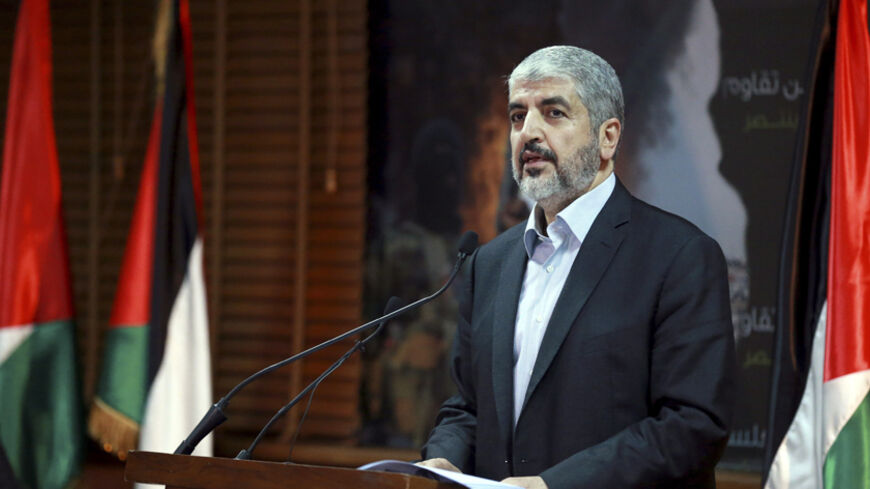 Hamas has been in a state of euphoria since Dec. 17, when the European Union’s General Court decided to remove it from the EU's list of terrorist organizations, where it had spent 11 years.

Immediately after the EU decision, which is subject to appeal, Hamas leaders rushed to welcome it. Chief among them was Khaled Meshaal, head of Hamas’ political bureau, who said Dec. 17 that the decision is a step in the right direction and corrects a previous mistake. He said including Hamas on the list was not based on objective facts and conflicted with the right of peoples to resist occupation. According to Meshaal, since Hamas’ establishment 27 years ago, the movement has conducted nothing but legitimate resistance against the Israeli occupation of Palestinian territories.

Izzat al-Rishq, a member of Hamas’ political bureau, told Al-Monitor in a phone interview from Doha, “The EU decision is a legal victory for Palestinian rights. It exposes the suspicious, hostile actions against the Palestinian people, as putting Hamas on the terrorist list was an injustice to the movement of national liberation.”

Lawyer Khaled al-Shuli, Hamas’ representative in the case, confirmed from Paris in a phone interview with Al-Monitor, “The decision is legally binding on the EU, as it was issued by a competent judicial body that has jurisdiction binding on member states. It is difficult for the EU to revoke it, given the complicated conditions that it contains and that do not apply to Hamas.

“As soon as the EU court puts the decision into effect, Hamas’ political leadership, its military wing, the [Izz ad-Din] al-Qassam Brigades, and all of its institutions will no longer be listed on the EU’s list of terrorism. Moreover, the European provisions related to the prohibition of Hamas funds will expire within three months,” Shuli added.

Hamas was not the only organization to welcome the European decision. Fatah's leader in Gaza, Yahya Rabah, said Dec. 17 that the EU decision dealt a blow to Israel and showed that the international community is aware of the fairness of the Palestinian cause. At the same time, this decision gives Hamas a new responsibility — to watch its words and actions and to prevent any future accusations of terrorism.

Hamas welcomed the EU decision not only on the judicial level, but on the political level as well. Its representative in Lebanon, Ali Baraka, told Al-Monitor over the phone from Beirut that the decision “opens a new page in EU-Hamas relations. Although many European countries meet with representatives of the movement, publicly and privately, the decision will encourage them to receive Hamas leaders on their territory and start a dialogue with them.”

A European diplomat who travels between Gaza, Doha and Brussels conducting indirect dialogues with Hamas spoke with Al-Monitor by phone from Jerusalem. Asking not to be identified, he said, “The decision prompts European countries to open a public dialogue with Hamas without being accused of communicating with a terrorist movement. It also allows European diplomats to visit Gaza, and Hamas representatives to land at European airports.

“Nevertheless, there are real European concerns that the Jewish lobby and Israel’s sympathizers will pressure the EU and stop it from translating the court’s decision into political action that would allow a rapprochement with Hamas,” he added.

Al-Monitor asked a Hamas senior official who meets with European diplomats about the price Hamas would have to pay for the judicial decision to be reflected at the political level. The official, speaking on condition of anonymity, said, “It is too early to talk about direct political openness between Hamas and Europe, because despite our satisfaction with the judicial decision, we feel that caution and thought are in order, separate from any emotional enthusiasm.”

He added, “The EU did not ask us for a price in exchange for the decision. We know that the European judiciary is independent and is not influenced by politicians. However, a number of European politicians we recently met in Gaza, Beirut and Doha hinted to us that Hamas is required to show flexibility in its political discourse toward the West and Israel and take a step forward in the political process.”

It is clear that Hamas views the EU decision as a major breach in the movement's years of political isolation and a new political horizon that it needs now more than ever. At the same time, however, Hamas is fully aware that the decision is still in the legal realm, and that any translation into political communication with European politicians requires Hamas to change its political discourse, chiefly endorsing armed resistance and rejecting a political settlement to the Palestinian issue.