The Gulf Initiative has failed to bring peace to Yemen, prompting the need for a new initiative that is more realistic and includes a long-term economic and development plan. 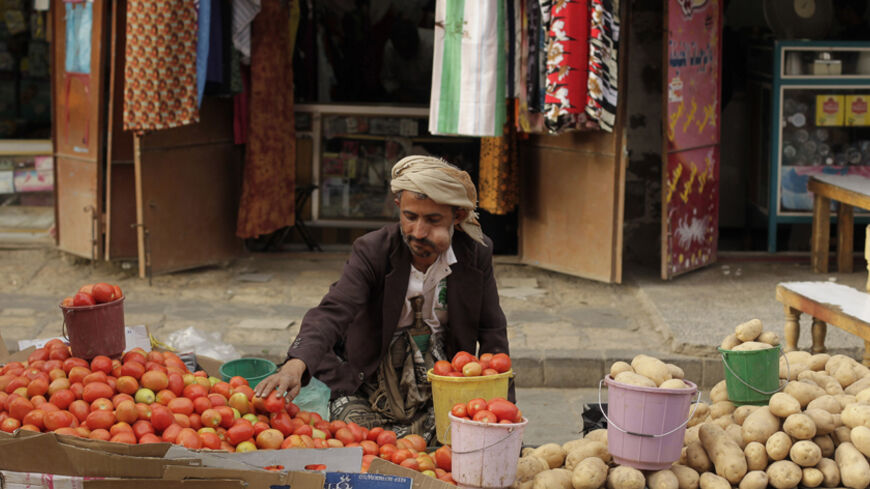 A street vendor chews qat, a mild stimulant, as he sits by his vegetable stall at a market place in Old Sanaa, March 19, 2014. - REUTERS/Khaled Abdullah

Yemeni state institutions suffered a collapse after the fragile political process sponsored by Gulf states and the UN Security Council ground to a halt after three years. This collapse put a definitive end to Western praise for the Yemeni paradigm, considered by some as the model for solving conflicts in the region.

The Gulf Initiative succeeded in transferring power and ending armed hostilities in Yemen, but it has failed to instill peace. The cause of that failure stems from the core tenet being legally and in other ways flawed to the extent that it is difficult to rectify. Perhaps this difficulty stems from the unattainable desire to placate all factions at the expense of all other considerations, and irrespective of the Yemenis’ dream to build a true state, or perhaps because the initiative did not include an economic or development plan that could win the Yemeni people’s trust. Furthermore, the regional and international commitment to Yemen’s unity, security and stability was not accompanied by real, long-term plans, but by local anesthesia that numbed the pain here and there.

If Yemenis and others around the world truly want to save whatever and whomever remains in Yemen, they must adopt a new political and economic equation — a kind of Yemeni Noah’s Ark — leading to an intelligent, technical and economic Marshall Plan extending to 2025, during which time a state could be built. The plan should be similar to the one adopted for Germany after World War II in being an intelligent, nontraditional mechanism that intersects but remains unrelated to the plans of state institutions. In other words, it should employ permanent components, not piecemeal, expedient measures and committees.

What is needed is a political umbrella bigger than the one afforded by the Gulf Initiative. It must be more responsive, longer-lasting and more realistic than its predecessors. Such an initiative was lacking in the Peace and Partnership Agreement signed by the political factions on Sept. 21. More important, there is a need for a balanced, 10-year economic and developmental plan for Yemen.

Despite the fierce battles raging in the Middle East, the countries of the region and the world still have a real opportunity to adopt a plan to build the Yemeni state and instill stability and security therein. Politically speaking, the chances for success this time around are significant, because the regional powerhouses, Saudi Arabia and Iran, have formed a united front against the Islamic State (IS). In addition, the Houthis are indebted to Qatar, sponsor of the 2009 Doha Agreement that gave them political recognition after their activities were outlawed by Sanaa. In addition, the Qataris established the Saada Reconstruction Fund, which can be revived when needed.

A workable plan would embody a unified and genuine will to instill stability in Yemen and restore the conflict there to the previously espoused mechanism, which was based on fair political and economic competition as well as shared interests without the threat of force. That Yemen is wracked by great institutional and social destitution actually facilitates the adoption of state-building projects, as societies and institutions are less resistant to change in desperate times. A sustainable peace plan for Yemen cannot succeed, however, without the adoption of an economic and developmental Marshall Plan capable of enduring irrespective of the faction in power while remaining largely unaffected by the prevailing security conditions.

The government led by Prime Minister Khaled Mahfouz Bahah was formed in October at a stage filled with difficulties but also with opportunities to build strong institutions. Given such opportunities, one could adopt a national, regional and international project that restores the Yemeni people’s faith in themselves and the world and through which local and foreign entities can expand on their efforts, making this a turning point for Yemen.

Yemen faces many challenges related to economic development, but it also has great potential. For example, why not transform the beautiful island of Socotra into a world-class international maritime trade route stop and tourist destination? It is far removed from the events in the rest of Yemen and would give the entire country a glimmer of hope of things to come when peace prevails. Why can't Socotra become another Hong Kong or Hawaii? It possesses all the elements to transform it into a maritime or tourist attraction, with its location and unique, pristine environment. Knowing that Aden's ports competed with Liverpool’s and New York’s in the 1950s, why not transform Aden into another Dubai or Singapore?

In Yemen, men of politics and authority abound, but few men of state. Why not invest in an academy for higher education in governance, economics, public administration and law? Yemen should build institutions within the framework of a comprehensive educational and university reform plan that trains future leaders and develop plans to assimilate them into state institutions, forming the vanguard of a strong and modern state administration.

In short, Yemen’s fate is controlled by its politicians and the politics they practice, while other avenues of more comprehensive and useful intervention remain untapped. Events indicate that no peace plan can succeed if it is not accompanied by a long-term, comprehensive and real rebuilding and development plan. If done otherwise, the result will be similar to that of the Gulf Initiative.

There are two avenues through which Yemenis and the rest of the world can make a qualitative leap forward: smart investment in education and institution building in the medium term and the adoption of strategic, economic projects in the long term that will pave the way for the establishment of a Yemeni state worthy of local, regional and international trust.

The way countries in the region and others are currently dealing with Yemen indicates that they feel that safeguarding Yemen and achieving a modicum of civil peace therein are luxuries that will endure. That is an inaccurate assessment, however, as this luxury is headed toward becoming a necessity. Soon, these countries will face Yemenis’ wrath, as the first test of their agreement draws near and Sanaa, the city of Shem, son of Noah, is laid to waste, followed by the rest of Yemen. Yemenis will not be the only ones affected by its demise. Regional and international interests will also be harmed in this corner of the world.