While keeping a low profile on the conflict in Yemen, Russia has been making significant progress establishing connections in the south of the country, where it has historically had a military and political presence. 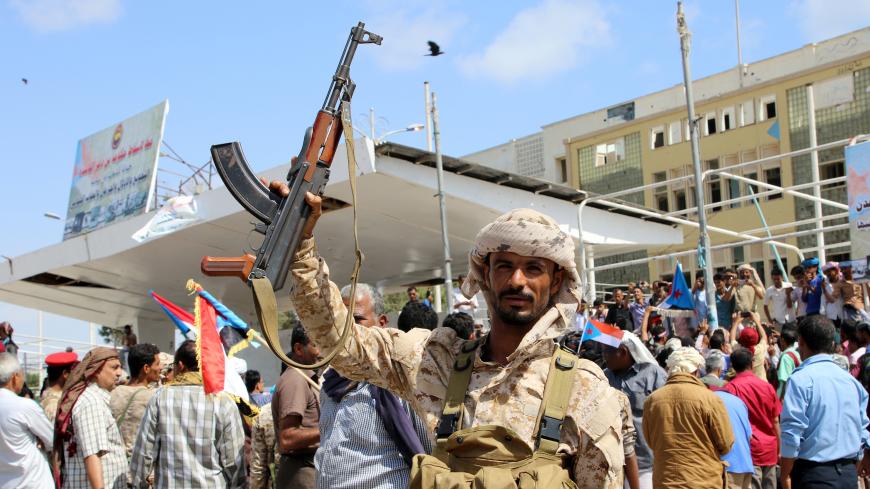 A southern Yemeni separatist fighter waves his rifle at the site of an anti-government protest, Aden, Yemen, Jan. 30, 2018. - REUTERS/Fawaz Salman

Russian Envoy to the United Nations Vassily Nebenzia spoke out Oct. 24 on the need to transport humanitarian assistance to southern Yemen and ensure that all major transportation hubs in Yemen remain open for aid. Nebenzia’s comments were welcomed in southern Yemen, coming just weeks after Russian Ambassador to Yemen Vladimir Dedushkin described southern Yemen as an important region for the resolution of the conflict. His statement was viewed by some South Yemeni separatists as implicit criticism of the UN’s decision not to invite the Southern Transitional Council (STC) to early September’s ill-fated Geneva peace talks.

Russia’s concern about southern Yemen, evident in these official statements and a wide array of Russian-sponsored informal mediation initiatives in the region, can be explained by Moscow’s historic connection to the region and its ambitions on the Red Sea. During the Cold War, the former state of South Yemen was the Soviet Union’s strongest ally in the Arab world and the site of major Soviet military installations in Aden and Socotra. The legacy of Cold War-era cultural exchanges between Russians and South Yemenis, fostered by the presence of Soviet researchers in Socotra and South Yemeni civil servants in Soviet educational institutions, has perpetuated Moscow’s interest in the region.

From a strategic standpoint, Russia’s willingness to insert itself as a stakeholder in southern Yemen is inextricably linked to its desire to join the inter-state competition for access to the Red Sea. In recent months, Russia has conducted negotiations with senior policy-makers in the Horn of Africa to enhance its economic and military presence in the region. These diplomatic overtures have resulted in serious discussions about the creation of a Russian naval base in Somaliland and a Sept. 1 agreement to establish a logistics center in Eritrea.

If Russia establishes these facilities, a military installation in southern Yemen would be a desirable strategic asset as it would link Moscow’s presence on the Horn of Africa to the Arabian Peninsula. This installation’s potential value for Russia has been articulated by former commander-in-chief of the Russian navy Felix Gromov, who called for the establishment of a naval base near the Gulf of Aden’s trade routes in August 2017. While these projects are long-term goals, playing a decisive role in stabilizing southern Yemen could give Moscow the bargaining power it needs to secure a Red Sea base.

To enhance southern Yemen’s stability, Russia has taken an active role in combating threats to southern Yemen’s economy and ensure the security of its shipping lanes. Since September 2017, Russia has facilitated the transfer of hard currency from the Central Bank of Yemen to southern Yemen to ensure that Yemeni government-aligned civil servants and military personnel are adequately paid. Yemen’s Ambassador to Russia Ahmed al-Wahishi praised the policy during a recent interview, as he views the Houthis’ seizure of Yemeni government assets and efforts to dilute the value of the Yemeni riyal as a major source of instability in Yemen. Wahishi also thanked the Russian Foreign Ministry for opposing Houthi militant attacks on Saudi oil shipments that run though the Bab al-Mandab Strait, a chokepoint between the Red Sea and the Gulf of Aden.

Russia has also acted as an informal arbiter between moderate supporters of southern Yemeni autonomy and the government of President Abed Rabbo Mansour Hadi. The Russian government has engaged in dialogue with Yemeni Socialist Party (YSP) leader Abdulrahman al-Saqqaf, a coalition partner of Hadi, and the former prime minister of South Yemen, Haidar Abu Bakr al-Attas, to encourage the politicians to continue pushing for expanded South Yemeni representation within legal frameworks. This strategy was effective due to a rift between the YSP and STC, which opposes the YSP’s alignment with Hadi, and the cordial relationships between left-wing Yemeni politicians and Russian diplomats that emerged during the Cold War.

Russian officials have also attempted to encourage moderates within the Southern Movement to lay down their arms and defend the rights of southern Yemenis through a multilateral intra-Yemeni peace settlement. In March, Vladimir Dedushkin met with Fuad Rashid, the first vice president of the Southern Movement’s Supreme Council, and two of his allies within the movement to encourage members of the faction to condemn the violence perpetrated by militant southern Yemeni separatists in Aden. This meeting, in which Rashid urged Southern Movement members to cooperate with the Hadi government against Houthi militants, was successful. Rashid also claimed that the Southern Movement’s stated goal was to give southern Yemen a greater role in implementing UN Resolution 2216, which calls for the cessation of political violence in Yemen.

Despite these fruitful diplomatic overtures, Russia faces significant obstacles in its quest to install itself as an indispensable stakeholder in southern Yemen. Experts from the STC office in Washington, DC, told Al-Monitor that Moscow might view southern Yemen as a Syria-style power vacuum that is ripe for Russian influence. From the STC’s perspective, this evaluation is detached from the reality on the ground, as the UAE retains control over southern Yemen’s main ports and has a formidable ground presence in the region that Russia cannot realistically displace. The UAE’s hegemony, combined with southern Yemen’s current inability to provide Russia with material incentives, cause the STC experts to view Russia as a friendly partner that helps the organization expand its international presence, rather than a decisive stakeholder.

While it is necessary to consider the limitations of Russian power in southern Yemen, Moscow’s cultivation of partnerships within the YSP and Southern Movement should not be discounted. As the Southern Movement continues to act as a bulwark against Houthi expansion, the likelihood of STC representation in a Yemeni peace settlement continues to rise and Russia’s growing presence in southern Yemen could enhance its influence over the resolution of the Yemen conflict.