Political factors are not the only cause of Turkey’s border security vulnerability. 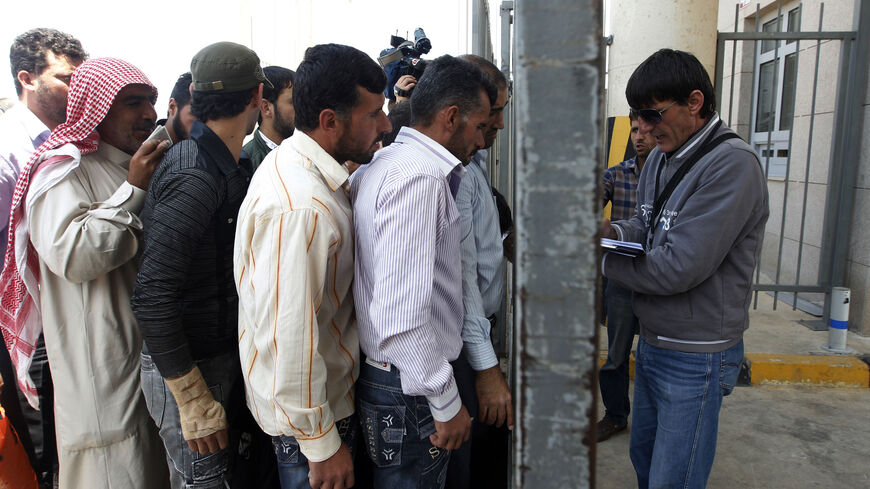 Syrians wait to cross back into Syria at the Turkish Cilvegozu border, opposite the Syrian commercial crossing point Bab al-Hawa, in Reyhanli, Hatay province, May 14, 2013. - REUTERS/Umit Bektas

A correspondent in Turkey
November 9, 2014

Recently, there has been a marked increase in news and commentary about Turkey’s security shortcomings along its borders with Iraq and Syria. These reports note that in the Syrian case, anyone can freely cross the border with vehicles and goods.

Some commentators say this laxity, especially on the Syrian border, is a result of an intentional policy decision by the Justice and Development (AKP) government to support the Syrian opposition — that it is purely politically motivated. Such privileges allow Islamic State (IS) fighters and the Syrian opposition to freely cross back and forth between Syria and Turkey to procure their logistical needs.

I suggest in this article that these political explanations may not be sufficient to fully explain Turkey’s security vulnerabilities on its Syrian, Iraqi and Iranian borders. We should acknowledge the fact that there is a glaring capacity deficiency at play. Turkey has 2,753 kilometers (1,711 miles) of land border; this includes 560 kilometers (348 miles) with Iran, 384 kilometers (239 miles) with Iraq and 911 kilometers (566 miles) with Syria. The average altitude of the Iraqi and Iranian borders is about 1,800 meters (5,905 feet), where tough topography and weather conditions severely impede border security and supervision. Along the Syrian border, the land is relatively flat, at a low altitude.

The current state structure for border security in Turkey involves:

On-the-ground coordination of border management theoretically occurs through provincial and district governors and the Ministry of Interior. In total, Turkey’s border security is the joint responsibility of 28 different bodies of the Turkish state bureaucracy.

Aside from the argument that the government intentionally wants to maintain lax border controls, the primary cause of border security frailty is this circus of authority and responsibility. It is made worse when all the participants declare that border security is not their primary function.

When you add in the border security legislation enacted in 1991 — which has not been updated since — the confusion of authority and responsibility among these institutions gets worse, as most of them pass culpability on to the others.

A senior security official in Ankara who has dealt with border security both in the field and at headquarters summarizes the situation: “In Turkey, the military gives priority only to the security of the border strip to a width of up to 600 meters, as it has no legislative authority in border areas outside the border strip and customs gates. The Ministry of Customs is tasked with dealing with exports and imports. Border crossing security is its secondary mission. Police are responsible for law and order in cities, and their presence at the border crossings is a secondary function. In short, while in Europe borders are supervised by a single body, we do exactly the opposite. If you study how the Reyhanli bombing attack in 2014 was carried out, you will see that the Turkish security bureaucracy has miserably failed on border security.”

He also notes that the bureaucratic confusion that still exists at the border with Kobani speaks for itself for those who really want to understand this authority imbroglio. One thing, however, is clear: So far, for political reasons or not, the Turkish government has not taken the solid steps necessary to end the strategic confusion that is being felt at the highest levels of Turkey’s security bureaucracy.

Turkey’s land border security is one of the primary concerns of the European Union. This border security authority confusion on the part of the Turkish bureaucracy was mentioned in the European Union 2013 Progress Report. In the chapter on external borders and the Schengen region it was noted that Turkey has not yet set up a border security organization that will implement an integrated border management system. The report strongly criticized the entanglement involving authority and the resounding lack of coordination.

Why does the EU give so much importance to Turkey’s border security? It is because of Turkey's geographical location at an important junction of human and goods traffic between Asia, Africa and Europe. If Turkey joins the EU as a member, as it very much wants to, Turkey’s borders will become EU borders, making Turkey’s borders the responsibility of EU’s border security. Illustrating the importance of the issue is that the number of illegal migrants apprehended trying to reach Europe via Turkey in the last 15 years totals 800,000.

That is the number of those who were caught. Others made it. According to the same security official in Ankara, at least half that number — that is, 400,000 — reached Europe. In other words, an estimated one in three illegal migrants dreaming of reaching Europe have been able to circumvent Turkish border security. This worrisome situation explains the tight cooperation between Turkey and the EU on border security. Especially after 2013, steps were taken to strengthen the cooperation between Turkey, Greece and Bulgaria to prevent illegal migrant traffic. The most crucial step taken so far has been the Integrated Border Management System (ESYS). ESYS, further complicated by the incompetence of Turkey’s security bureaucracy, was actually launched in 2003 to harmonize Turkey’s borders with the Schengen region, with an initial cost outlay of 3.7 billion euros ($4.6 billion).

Finally, the “Document for Protection of External Borders” was signed by EU and Turkish officials. According to this document, all border services are to be provided by a specially trained, professional and nonmilitary body. The cost of the project, supported by EU funds and scheduled for completion by 2018, was revised in 2012 to 8 billion euros ($10 billion). With the ESYS project, a border security general directorate of 70,000 personnel attached to the Ministry of Interior and led by a civilian with a rank equivalent to that of a governor will be set up, and in a phased four-year transition this body will take over all border security functions.

But regional developments have disrupted the plans; civil war in Syria and instability in Iraq delayed the implementation of the project. The Turkish bureaucracy was caught without having fully adapted to ESYS, but having already discarded its former procedures.

Another border security shortcoming is the deficiency in trained personnel and technological equipment, even at critically important crossings to Syria. When a car bomb killed 13 people at the Cilvegozu crossing on Feb. 11, 2013, it was found that the Syrian opposition controlling movement had no explosives detectors. Syrian opposition officials say that even after that explosion, despite several requests, they still haven’t received bomb detectors from Turkey. Experts say Turkey has to train Syrian opposition personnel in bomb detection for Turkey’s own security.

Still, no matter how tight and strong security may be on the Turkish side, with there being no state to deal with on the other side, ensuring border security appears to be a long shot.

Of course, one must not forget the existence of historic smuggling routes along the Iraqi and Iranian borders going back to the Ottoman Empire, and the vast experience and skills of families that have been making a living from smuggling for hundreds of years.

Another factor affecting Turkey’s border security is the government's intention to fill the security void by authorizing the National Intelligence Organization to conduct cross-border operations. The security official said no one can interfere with the crossing of people, vehicles and goods under the supervision of MIT personnel. Nobody can question what they are doing, and therefore these activities are not subject to public or legislative oversight. This is, naturally, a major security deficiency that is extensively exploited by many. Border crossings covered by the MIT shield, outside the control of security units, have emerged as another security problem.

In short, it is not correct to attribute Turkey’s border security problems — particularly on the Syrian border — only to political motives. Geographical factors, a surfeit of bosses, deficient coordination between bodies, the lack of a single body responsible for Turkey's border security, the government’s reluctance to issue a political directive to end this confusion, the eruption of the Syria crisis just as the reform was about to be implemented and the government authorizing MIT to oversee border security all play a part.