Having finished most of the 435-mile-long wall on the Syria border, Turkey is to erect walls on its borders with Iran and Iraq. 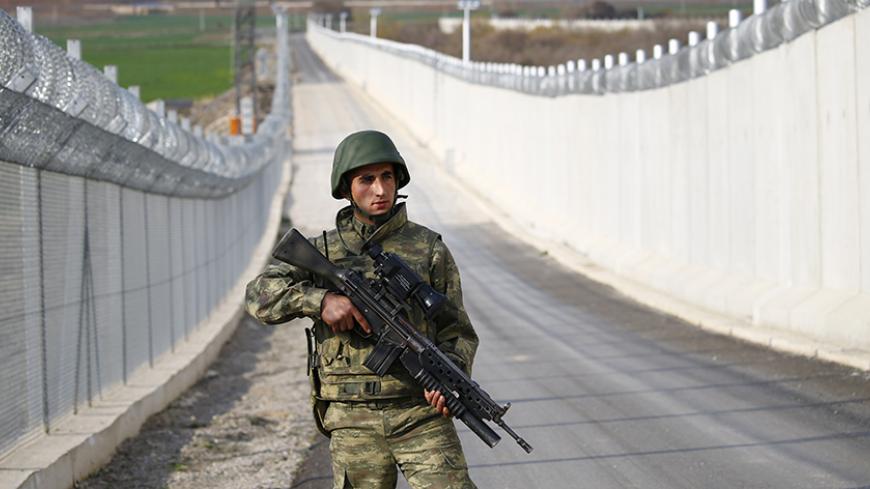 A Turkish soldier patrols along a wall on the border between Turkey and Syria near the southeastern city of Kilis, Turkey, March 2, 2017. - REUTERS/Murad Sezer

As the United States heatedly debates a wall on its border with Mexico, Turkey has been quietly building walls on its borders with Syria, Iran and Iraq.

In November 2014, Al-Monitor examined deficiencies in Turkey’s border security system, noting that one reason for the deficiency was — in addition to diverse political reasons — the commitment to a tacit tolerance policy especially on the Syrian border. Moreover, there was the question of the ability to remedy the situation.

However, since August 2016 when Operation Euphrates Shield was launched, Turkey has replaced its tacit tolerance policy with a “zero tolerance” policy. Ankara hopes the security wall along its border will be the pillar of its border security.

Ankara’s first goal is to extend the wall on its approximately 560-mile-long Syria border to its maximum length. The $400 million wall project was launched in September 2016 to prevent terror attacks from Syria, border smuggling and illegal crossings, and to control refugee movements. The first 347-mile phase of the planned 435-mile-long wall that abuts the provinces of Hatay, Sanliurfa, Kilis, Gaziantep, Mardin and Sirnak was completed last week, making it the third longest wall in the world after the Great Wall of China and the nearly 700-mile wall on the US-Mexico border.

The wall is being built by TOKI, Turkey’s state-owned construction enterprise. Reinforced concrete blocks are 9 feet high, 6 feet wide, 11 inches thick and weigh some 7 tons each. These concrete blocks are movable. Barbed wires top the blocks, and there are about 120 observation towers in critical locations.

The towers are equipped with land infiltration radars, night vision systems and advanced weapons. There is a ditch immediately in front of the wall and a road behind it for patrolling and to allow quick intervention if needed. Ankara said that with this wall, called an “Integrated Border Security System,” the country’s border security will be significantly enhanced.

Ankara also reorganized the security forces posted along the border. Seventy-four border outposts on the Syrian border that were previously under a variety of commands have been consolidated under one command. A border special operations battalion that will act as the first responder to mass refugee movement, smuggling and terror actions was established.

Minister of Defense Fikri Isik said that as soon as the wall is completed, there will be a transition to the second phase: “We are transforming it to an integrated security system. It will not be made up only by the wall, the road and illumination. They will be backed up by fiber optic sensors, cameras, observation balloons and unmanned aerial vehicles to make it a total integrated system.”

According to information Al-Monitor obtained from Ankara command corridors, in October 2017, work will begin on a 93-mile-long wall for the cities of Kars, Igdir and Van, and the 55 miles of Hakkari’s border with Iraq. Walls on the Iran and Iraq borders will be to combat terror and prevent smuggling.

According to a security official in the critical town of Kilis, which is close to Syria, the wall has been very useful. It has considerably reduced movements of refugees, smugglers and armed elements.

“Moreover, in the past there was incredible bureaucratic confusion of who was in charge. With the wall, authority and identifying responsibility is much better defined but more needs to be done. The wall has also modified the outdated perceptions of Ankara on border security, which in the past used to focus on combating terror. Now there is also concern with massive immigration and smuggling,” the official told Al-Monitor on condition of anonymity.

The radical change in Turkey’s perception of border security is not limited to its military dimensions.

There are also socio-economic implications. A businessman from the southeastern border province of Mardin, who asked to be identified with his initials M.U., told Al-Monitor, “The wall could be useful for security, but it has severely hurt the local economy and made contacts between families split in two countries nearly impossible. Because of the wall, young people who used to work in border trade are in a difficult position. The wall has increased youth unemployment. Those youngsters who can’t find jobs here leave and migrate to big cities.”

“The state built the wall, but I think they haven’t really thought out its social and economic ramifications,” another citizen told Al-Monitor on the condition of anonymity. “In the old days, if our relatives got sick in Syria, we were able to quickly transfer them to Turkey for treatment. Now because of the wall, crossings have practically ceased. This affects the sick people as much as terrorists and smugglers.”

Another businessman from Kilis speaking to Al-Monitor referred to the centurieslong tradition of trade between Anatolia and Mesopotamia. He said, “My forefathers traded with our relatives in Syria for centuries. Now the state says my modest business with my cousins across the border that hardly feeds us is illegal and erects a wall in front of us. Fine, let the wall stop terrorists and provide security, but it should not deny us our bread.”

The Integrated Border Security System will provide coordinated, harmonized border security between the Turkish military and the ministries of Defense, Interior and Customs. Nevertheless, the socio-economic implications of the wall should not be ignored. Currently, our decision-makers appear not to be worried about it. They are probably thinking that security overrides everything else. In the end, the wall is movable and, if necessary, they can dismantle it.