How the Islamic State is still seeping through Syria-Turkey border

Despite new security measures, including walls, Islamic State traffic through the Turkey-Syria border has not stopped. 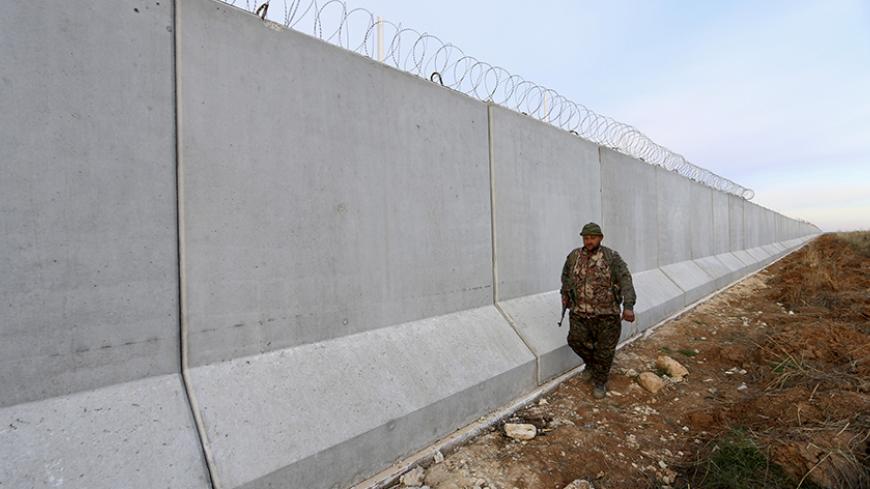 A soldier walks near the wall put up by Turkish authorities on the Syrian-Turkish border in the western countryside of Ras al-Ain, Jan. 29, 2016. - REUTERS/Rodi Said

Whenever there is major terror attack like the ones we saw at Suruc, Diyarbakir and Ankara, we start debating about the ease with which the Islamic State crosses borders and then we forget about it. The 98-kilometer (61-mile) stretch of border that has the only two openings between IS and the rest of the world, the Jarablus and Al Rai crossings across from Turkey’s Gaziantep and Kilis, has been the main point of contention between Turkey and the United States. During the recent visit of Vice President Joe Biden to Istanbul, recovering Jarablus from IS was again on the agenda. Turkey has declared the movement of Kurds west of the Euphrates River and their attempt to form a Kurdish corridor a red line.

The roads from Kilis to Jarablus and Al Rai have been the scenes of some strange events over the past few years. The government, under pressure to control the militants' border access, has been erecting walls at key crossing points. The measures have caused some reduction in this traffic, but not stopped it entirely.

Although everyone looks at Jarablus, the town of Elbeyli in Kilis province facing Al Rai is still the main point of crossings by militants. Daily logs by the Turkish Armed Forces are full of apprehensions of people trying to sneak over the border. According to Turkish intelligence reports, in 2015, Turkish security forces apprehended 961 IS members from 57 countries.

Reading the logs, one gets the impression that the border is sealed against illegal crossings. If you ask the Ankara government, no other country does as much to combat IS as Turkey. The reality is that the border is not sealed, nor is it truly open.

Selim Bayturkmen, who publishes a local newspaper in Kilis, told Al-Monitor that there are fewer crossings than before, although entries via the villages of Cildiroba and Besiriye continue.

To prevent border incursions, concrete blocks 3.6 meters high, 2.5 meters wide (roughly 12 by 8 feet) and weighing 8 tons are being installed along the border. The first phase of this plan will cover the 20-kilometer (12-mile) stretch between Elbeyli and Kilis.

A local source involved in transportation in Elbeyli told Al-Monitor, “There aren’t all that many measures the government is boasting about. Up until six months ago, 2,000-3,000 people used to cross the border daily in both directions. It was a beehive of activity with buses and minibuses forming long lines. Those vehicles are engaged only in bringing people from the Kilis bus terminal to Elbeyli to sneak into Syria. A ditch was dug and a wall is going up. Crossings have declined, but not ended. They take place mainly in the evenings, particularly from the villages of Arpakesmez, Akinci and Inanli. I can’t give you an exact figure but we have daily traffic of 200 to 400 people.”

The man, who asked not to be identified for security reasons, then explained why illegal crossings have not ended despite all the talk of measures, saying, “Smugglers make deals with soldiers. They buy them with money. Sometimes soldiers open fire; people get killed. For example, a deal may be made with a noncommissioned officer but soldiers don’t know about it and open fire."

He went on, “For the crossings to stop for good, the state must want it that way. I don’t think the government really wants to stop it. The border has always been there. Before, there was no ditch, no walls and no soldiers but nobody violated the border in those days. We have fields near the border. We used to come and go freely. Now we are afraid to go to our fields even in daylight because of this illegal activity. If the state really wants it, nobody can cross illegally. Otherwise, walls won’t stop it.

“Controls on roads are insufficient. At Kilis, there are two checkpoints that operate at certain hours. But there are scores of other roads you can use to get out of Kilis. Sometimes, because of complaints, the police show up and check identities for 10 to 15 minutes and leave. There is no serious control.

“Human traffickers are not under pressure. I haven’t heard of anyone detained for smuggling people. There is much money in this business. Smugglers have houses right on the border. They charge $100 to $300 per person to cross over. At nights they pay a noncommissioned officer $2,000 to $2,500 to look the other way for 15 minutes. Imagine how much money they must be making. All the border villages got involved in this business and many people have become rich.”

IS controls the Syrian village of Havar, which faces Turkey’s Akinci, a known crossing point. Ighde in Syria, facing Turkey's Arpakesmez, is controlled by Jabhat al-Nusra.

IS documents obtained by the Kurdish People's Protection Units provide details of the traffic that took place between Turkey and Tell Abyad, which was retaken by the Kurds in June. Some of the documents, passenger manifests for buses going back and forth, are stamped by the "IS Migration Committee," which regulated that traffic.

Mahmut Togrul, a Peoples' Democratic Party deputy from Gaziantep, said those organizing the border crossings actually reside in refugee camps in Turkey, and that officials know all about them but don’t interfere. Togrul told Al-Monitor, “We were visiting the Oncupinar border crossing in July. We saw a man in military uniform, with long beard and hair. He had three telephones and was speaking constantly on them. I learned that he actually lives in our refugee camps. I informed the deputy governor of Kilis. He said to me, ‘We cannot lock them up in camps and keep an eye on them constantly.’ This senior local administration official practically admitted knowing all about illegal crossings."

Togrul emphasized that despite some efforts, illegal crossings go on. “Traffic definitely continues. This is the only exit of IS to the outside world. They are seriously organized in Gaziantep. If you catch one, there are many others. You may say that for IS, Gaziantep is their human resources center.”

Reminded that the Turkish Armed Forces' website reporting the daily capture of IS militants gives the impression that there is no tolerance whatsoever at the border, Togrul replied, “Do you know how long they are detained? We are told they are apprehended, but most of them are quickly released. Their organization in Gaziantep is not a secret. They operate in broad daylight. Many nongovernmental organizations in side streets are actually IS fronts. [The Justice and Development Party's] struggle against IS is not sincere. The local administration is not honest either. They don’t consider IS militants terrorists. Also, this human trafficking has become a lucrative source of income for our border villagers. We know that in the 98-kilometer gap they provide crossing services for IS and earn big-time money.”