How fighters are filtering across the Syrian-Turkish border

Turkey is handling tens of thousands of refugees trying to cross its border from Syria, but isn't sure how it will deal with the accompanying militants, their families and IS-affiliated fighters. 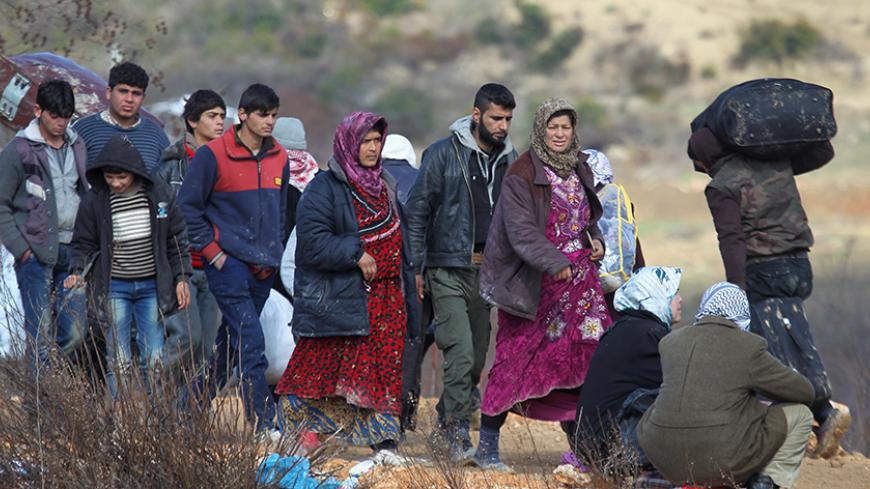 Internally displaced Syrians fleeing advancing pro-government Syrian forces carry their belongings near the Syrian-Turkish border after they were given permission by the Turkish authorities to enter Turkey, in Khirbet Al-Joz, Latakia countryside, Feb. 2, 2016. - REUTERS/Ammar Abdullah

Some 60,000 people trying to escape Syrian and Russian attacks in the province of Aleppo are amassed at Turkey's border, and concerns are rising that there are militants among them.

According to information provided by the Turkish military and Kilis governorate, there are many foreign fighters among those trying to cross into Turkey. A well-placed security source at the border provided profiles of the refugees: civilians fleeing from the Aleppo-Azaz area, families of opposition fighters who used to live in the liberated areas, fighters supported by Turkey in the Bayirbucak and Aleppo-Azaz areas and foreign Islamic State (IS) militants.

Turkey, which had suspended its open-door policy, is now more flexible at the Hatay-Yayladag border area for those fleeing from the Bayirbucak region.

The Cilvegozu border crossing, the only official crossing between Idlib and Jisr al-Shughour, is only allowing the sick and wounded to enter Turkey.

At the Oncupinar border gate near Kilis, which normally provides access to rural Aleppo, crossing is strictly regulated. Further east, the official crossing at IS-controlled Jarablus is closed.

A relief worker told Al-Monitor, “Gates are closed, but fighters are using alternative crossings. It is impossible to seal all the border crossings used for illegal crossings. All strict measures taken block crossings to ordinary people, not the fighters, who know other routes.”

Because of strict border controls at Reyhanli and Kilis, there has been a surge of refugees at Hatay. Hundreds of people in their muddy clothes congregate at the bus terminal trying to go somewhere. They marched through fields to escape.

Two different sources from relief organizations explained to Al-Monitor the situation regarding the concentration of refugees at the Hatay bus terminal.

The people crossing through Yayladag to Hatay are not Turkmens, but Arab, they said. Most of the Turkmens were earlier settled at two refugee camps at Yayladag or had moved in with their relatives. Some 10,000-15,000 refugees living in the Yamadi camp on the Syrian side arrived mostly after the start of Russian air attacks in November.

But Arabs, who know the border is open to Turkmens, also want to use the Yayladag crossing.

"These people who hail from rural Aleppo walk across mountains and cross fields and streams to get to Turkey," one relief source said. "Every day 300-400 people arrive via this route. Those who don’t have refugee identification cards are stopped. Minibuses that transport refugees without cards are banned from operating, but people find a way to come at night — sometimes by paying two or three times the normal rate."

When they reach the bus terminal in the early morning, they take buses to other parts of Turkey, especially Istanbul, and some are transported by the state to camps in different parts of the country.

"Many adult men arrive at the terminal with women and children. Nobody knows if they are fighters because everyone claims to be a regular civilian," the source said.

Many wounded have been evacuated to hospitals in Hatay, Kilis and Gaziantep. None of them admit being fighters, despite their wounds.

Those who want to go to Kilis are accommodated at refugee camps set up between the Azaz and Bab al-Salameh border crossings in Syria because the border is blocked.

Local sources say the opposition forces that control the Syrian side of the Bab al-Hawa crossing at Reyhanli are cooperating with Turkish authorities to keep people away from the border. Refugee camps in Syria facing Reyhanli are supplied by the Turkish Red Crescent and other relief organizations.

BBC correspondent Selin Girit, who did research along the border at Kilis, shared her impressions of the situation with Al-Monitor.

“The Kilis Oncupinar border crossing is as quiet as it can get — the only action is by media crews. … Every now and then an aid truck belonging to UNHRC [United Nations High Commissioner for Refugees], the Turkish Red Crescent or one of the other humanitarian agencies crosses into Syria carrying food, water, blankets and hygienic supplies to the thousands waiting on the other side of the border," she said.

She added, "For the time being, only medical emergency cases are allowed to cross into Turkey. The wounded are being treated at the Kilis State Hospital. One man who lost an eye in the latest attacks targeting the north of Aleppo, with 15 other shrapnel marks on his back, told me he had left his wife and three kids behind and he wanted to go back to get them. 'I don’t understand why Turkey is keeping the borders shut,' he told me. 'There are dozens of airstrikes every day.'"

Suleyman Tapsiz, governor of Kilis province, told Al-Monitor that in the past three years Turkey had used relief aid to quietly build eight camps in villages within a mile of the border on the Syrian side. “They were already taking care of 50,000-60,000 refugees," Tapsiz said. "Now we have increased the capacities of these camps to accommodate the newcomers. We are in the process of building a ninth camp, which has already received 10,000 people."

He recently said the camps had received 30,000-35000 people in just 48 hours. He added, "We don’t have major problems. We can absorb the people on the Syrian side of the border. We meet their humanitarian needs. All nearby provinces are prepared for any eventuality.”

The policy of keeping the refugees on their side of the border is actually part of the government’s strategy to set up a safe zone on the Azaz-Marea line, according to Tapsiz.

There is a lot of talk about militants mingling with refugees, but the rumors are coming from people who don't really know much about it. A local source who did not want to be identified told Al-Monitor, “Of course there are fighters among the people at the border, but it is difficult to give a number. I have heard that there are some fighters who fled the front line and showed up at the Oncupinar crossing. There are efforts by Syrian opposition groups to encourage them to return to the front lines. Some fighters from the Bayirbucak area also fled to Turkey. We keep hearing strong condemnation of fighters who have fled the fighting.”

More telling information can be found in statements issued by the Turkish Armed Forces and the Kilis governor's office. Officials reported that numerous IS-affiliated people, both Turks and foreign nationals, have been captured trying to cross into Turkey illegally in groups of varying numbers, and sometimes traveling with children. The information suggests there is no recognizable pattern to such attempts. The most desperate travelers probably make deals with smugglers who specialize in human trafficking.

Turkish President Recep Tayyip Erdogan had bargained with EU officials Jean-Claude Juncker and Donald Tusk and agreed to keep the border under control in return for 3 billion euros ($3.4 billion). It has widely been reported that, according to alleged transcripts of a November meeting, Erdogan had unsuccessfully tried to double that amount by threatening, “We will open the Greek and Bulgarian borders and fill buses with refugees.”

But the looming question is what Turkey will do with all those fighters who will flee across the border when the Syrian army recovers the area. This is certainly a serious worry — and not just for Turkey.