While most countries are downsizing their military assistance to Afghanistan, Turkey is offering more military support and training. 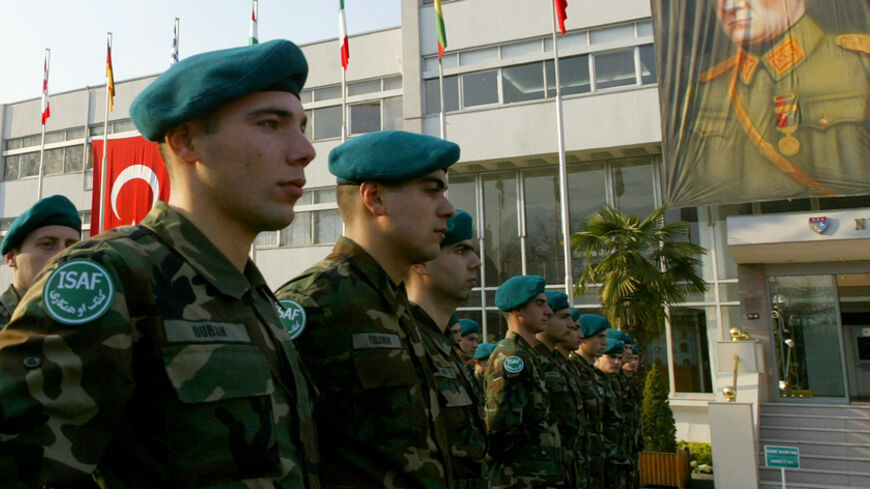 Turkish soldiers stand next to a portrait of Mustafa Kemal Ataturk as they attend a farewell ceremony at the headquarters of the NATO Rapid Deployable Corps-Turkey, Istanbul, Jan. 11, 2005, on the eve of their departure to Afghanistan. - REUTERS/Fatih Saribas

Due to developments in Iraq and Syria and the Islamic State (IS) issue, the international community has seemingly reduced its interest in Afghanistan. Yet, 2015 is likely to be a critical year for the country, as NATO's International Security Assistance Force (ISAF) and the United States' Operation Enduring Freedom come to an end on Dec. 31, 2014, meaning an approximate 80% reduction in foreign troops. As of 2015, coalition forces in Afghanistan will leave behind 15,000 troops to provide support, training and consultation. But who will fill the ensuing security void? For some, it's the 280,000 members of the Afghan security forces, though with significant capacity deficiencies.

The year 2015 is also critical for Afghanistan due to the slow and fragile governmental transition. The results of the April 2014 elections, which were plagued by charges of fraud and other irregularities, are still not finalized, making it difficult to achieve political stability.

Afghanistan’s already complicated and shaky status comes closer to a breaking point as a result of other issues: undependable security forces; serious allegations of governmental corruption; inability to find ways to negotiate with the Taliban; prevalence of drug cartels; prominence of warlords challenging state authority; and a long list of problems with Pakistan.

Today, soldiers from 48 countries participate in the missions of ISAF and Operation Enduring Freedom, yet this number will drop significantly in 2015. The United States said it would leave 9,800 soldiers, and Britain, Italy, Germany and Turkey have also announced their intentions to continue their missions. It's noteworthy that Turkey is the only country that has promised to increase its troops in Afghanistan next year and to expand its support in many other fields.

Why is Turkey showing so much interest in Afghanistan?

First, Turkey and Afghanistan have a deep-rooted, special relationship based on strong historic ties. In 1921, when Turkey was fighting for its independence, Afghanistan was the first country after the Soviet Union to recognize the government of the Republic of Turkey. Turks have also not forgotten that Afghan King Amanullah Khan was the first head of state to visit the new Turkish republic in 1928.

In 1932, Turkey established Ali Abad University, and in 1935, the law and medicine faculties at the University of Kabul. Turkish doctors and academics spent many years at these institutions. As of 2014, Turkey has implemented about 600 projects in Afghanistan, including constructing or repairing schools and medical facilities, for a total of nearly $300 million.

Turkey’s contributions to Afghanistan in the security field are also substantial. Since 2001, Turkey has twice commanded the ISAF, and since 2009, Turkey has been in charge of the Kabul command. Turkey trained 17,500 Afghan soldiers, with 3,500 others trained in Turkey. The Afghan National Army was supplied with $50 million in equipment, $7 million in training and $184,000 in medical assistance.

In January 2015, within the framework of its Resolute Support Mission, NATO will replace the ISAF mission, and Turkey will increase its troops from 900 to 1,500. The Turkish contingent will be responsible for operating the Kabul Train Advise and Assist Command; providing personnel for Train Advise Assist Command-North, which will be under German command; operating the Kabul International Airport and supporting the Kabul military hospital with medical personnel. Furthermore, the Turkish ambassador in Kabul, Ismail Aramaz, has been appointed senior NATO civilian representative to Afghanistan.

Turkish military commanders note that about 30,000 Turkish troops have served in Afghanistan and not one has been implicated in a criminal offense. They note that not a single round was fired on operational missions. They also proudly say not a single Afghan national was wounded or killed by Turkish soldiers. In Afghanistan, where coalition forces are frequently accused of causing civilian deaths, the ease with which Turkish soldiers move around without their uniforms and communicate with local people has become an asset for the force.

In a nutshell: For 13 years, the coalition forces have been in the "New Afghanistan," where more than 500,000 soldiers from 50 countries have served, and governments have spent $640 billion. So, it is not easy to simply say "yes" when asked if Afghanistan is a safer and more stable place.

Will Afghanistan be able to survive on its own, or will 2015 be remembered as the beginning of a new era of breaking apart? There can be no doubt that the populace-centric and the train-assist-advise models that the Turkish army has implemented over the past 11 years will gain prominence and be seen as examples.