A group of talented young designers have decided to take on the neglected eyesore that is Tel Aviv’s Central Bus Station, and by experimenting with urban agriculture and innovation they are showing that even this concrete monster can flourish. 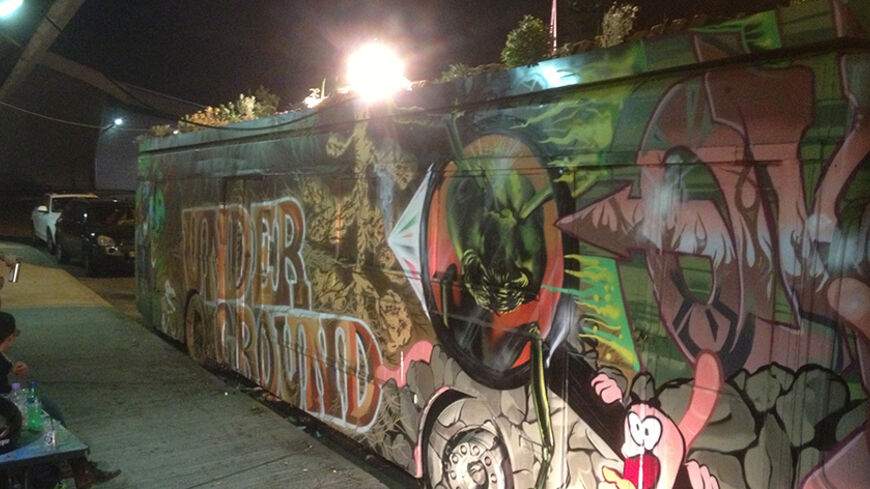 It certainly was one of the stranger moments in the history of Tel Aviv’s new Central Bus Station. On Nov. 20, dozens of people wandered the corridors of the enormous structure, infamous for being difficult to navigate in. These people had maps in their hands, wondering which way to turn next. But they weren’t trying to catch a bus. They were trying to find the best route between plants hanging in the air, commercial spaces that had been transformed into enormous art installations, and dancers challenging gravity on diagonal concrete railings. It was all part of an exhibit called “The Next Station,” combining art, agriculture and micro-ecosystems throughout the new bus station.

The dissonance was undeniable. On one hand, there were these upbeat, trendy events that were the result of an ambitious project by the “Onya” collective, a group of artists and designers, architects and activists that describes itself as an “Urban Environment Nursery.” On the other hand, there was the drab, miserable day-to-day life of the Central Bus Station, known as a magnet for migrant workers, disadvantaged people and crime. The result is incredible.

Just mention the new Central Bus Station to your average Tel Avivi — and not just them, for that matter — and the immediate, almost instinctive response, is one of sheer disgust. No one really goes there, and large parts of the building aren’t used at all. The promising architectural landmark, which opened its doors in 1993, has become a code word for municipal negligence. Built right in the middle of the Neve Shaanan neighborhood in southern Tel Aviv, the huge, seven-story complex was intended as a vibrant commercial center and national transportation hub. Very soon, however, it became clear that the planning of the new bus station was faulty, so that even today many parts of it are not being used at all. The way that it was split into levels is not conducive to bus traffic, and the building itself is the source of social, economic and environmental damage in an already troubled neighborhood. Tens of thousands of people still pass through the bus station every day, but most of the building lies abandoned, and the businesses that still operate there are considered low-end. Some of them are even questionable. The human landscape is relatively poor, too, consisting mainly of migrant workers and residents of the neighborhood.

“The building was plopped down in the heart of a residential neighborhood. It is a white elephant, detrimental to the surrounding area and the people who live nearby,” Deputy Mayor Asaf Zamir said. In 2013, the City of Tel Aviv approved a master plan that would rezone the building so that it would no longer serve as a bus station. It would be transformed into a commercial and residential complex that even includes hotels. Meanwhile, however, the Central Bus Station remains just the way it was: desperate, derelict and violent.

The collective wants to challenge this reality. Its members are enthusiastic advocates of sustainable urban development, so they decided to take over the building, with all the bad that it entails, and transform it into a laboratory for urban agriculture and municipal innovation.

Visitors can now follow a trail, which begins at the nearby Neve Shaanan pedestrian mall, where poor people gather every day, and ends on the bus station’s seventh floor, the passengers’ area for the Dan municipal bus company. Along that trail, the members of the collective have created some 30 projects, which include: a modular library that incorporates plants; a colorful bus with a garden on its roof; demonstrations of ways that food can be grown in the city; agro-poetics, or poetry that focuses on sustainability, nature and the city; and illuminated ads turned into works of art. The exhibition, which opened Nov. 20, will remain in place until the end of the year.

“The collective was founded after the social protests. The one thing we learned more than anything at the time was that each person is responsible for himself and the space surrounding him,” said Avigail Roubini, who studied visual communications at the Bezalel Arts Academy. “Our goal of coming together to take action in depressed urban areas grew out of our cafeteria discussions. Lots of people pass through here every day. A project like this could give them the incentive they need to create a green space of their own in their immediate environment. They will see that it is possible, just as it was possible in this lump of cement. We all know how a little green could lift a person up, and that's even before we start talking about the enormous economic and social implications.”

The collective refuses to view the ugly building as entirely beyond hope. “We are simply allowing for another alternative. We are not here to fix everything. We aren’t social workers,” says Roubini. “As far as I am concerned, the same is true of any normal building with a tiny bit of shared land. It is inconceivable that the neighbors wouldn’t get together to do something with it.”

“There are plenty of ideas and visions as to what can be done with the space now occupied by the Central Bus Station, if we demolish it and start over from the beginning,” says Zamir. “What we have here, though, is a project that says, ‘This is what we have, so this is what we work with. These are serious people spearheading urban innovation. Suddenly there are lots of young Tel Avivis here, and even a few local residents, who don’t usually come here. The potential is huge, not only in the distant future, but in the here and now, even with the current building. I’ve been keeping tabs on plenty of projects by young innovators in this city, and this is the most serious project I’ve seen here so far.”

Most of the people living in the neighborhood and the owners of local businesses aren’t really partnering in what is happening at the Central Bus Station. While visitors raise a toast on the seventh floor, merchants on the sixth floor know nothing about the events taking place right next to them, above them or below them. The same is true of passersby using the complex. Yaakov, who wears a yarmulke (a Jewish skullcap), is sitting in the green library, full of potted plants. While he enjoys everything that is happening here, he doesn’t really understand it. “I got off the bus and heard music, so I came to see what it was. It’s beautiful.” What bothers him most is that they are selling plants in the Central Bus Station, even though according to the Jewish calendar it is a sabbatical year for the earth, when raising plants is forbidden.

Nevertheless, the exhibition has succeeded in fulfilling its ambitions. Soldiers on their way home stop to watch a spontaneous dance performance by Jenn, Annie and Berty, all overseas students with the Vertigo dance troupe of Jerusalem. Standing beside them is Muhammad, a young man from the city of Ramle who works in Jaffa. “It’s so beautiful,” he says, and he takes a photo.

Berty says that his roommate, who created a piece of art as part of the project, suggested that he participate in a project to transform the bus station’s in-house radio station into an ecologically sound fish farm. The dance corresponds with various ecological and recyclable components of the installation. “We’re always looking for new places to perform,” says Berty, adding that the driver of the bus they took from Jerusalem to Tel Aviv was so surprised by what they planned that he asked them, “Are you sure that this is where you’re performing?”

“The place has a bad image,” said Mickey Ziv, the bus station’s general manager. “There are a lot of reasons for that, too, some justified, while others less so. One of my roles is to change that image, and one of the best ways to do that is through culture.”