The African immigrant community sparks bitter disputes within Israeli society between those who sympathize with their hardships and those who advocate their deportation. 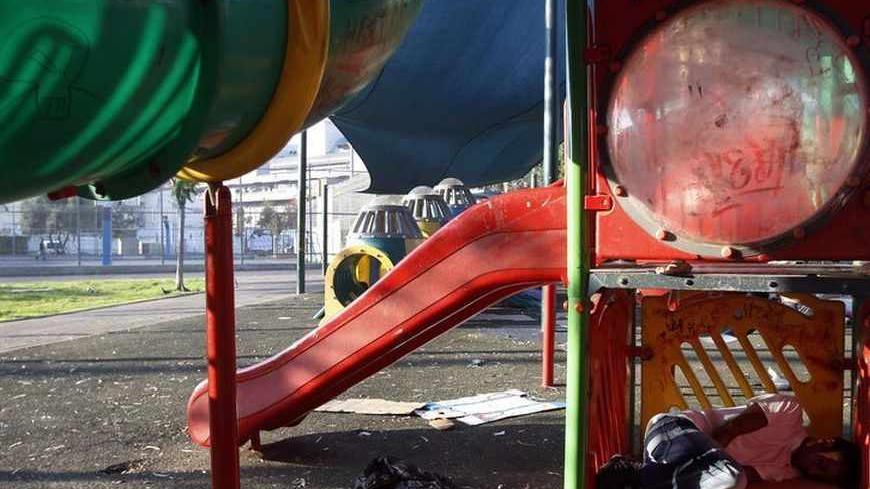 Due to the unbearable congestion and overcrowding, a number of young Eritreans have recently decided to convert a playground into a makeshift bedroom. It takes some time to get used to the surge of creativity witnessed in Levinsky Park, which is located a few steps away from the old central station in south Tel Aviv. On one of the slides, two mattresses have been laid, side by side. Next to another play facility, a trim little tent has been set up, inside of which some other youths find shelter when night falls. On the surrounding well-tended lawn area, hundreds of illegal migrants from Africa gather every night to prepare themselves for another night's sleep under the open sky.

The longtime residents of south Tel Aviv cannot call to mind ever being faced with a crazy reality such as this, where entire neighborhoods have been “conquered,” as they put it, by thousands of illegal asylum seekers, refugees, migrants and job-seekers from Africa.

According to the official data released by the Israeli Administration of Border Crossings, Population and Immigration, as of April 2012, some 60,000 asylum seekers entered Israel, 90% of them Eritreans and Sudanese. It further emerges from the data that most of the illegal migrants managed to settle in Tel Aviv with the hope that in the big city, they would be able to build a new life for themselves alongside other illegal migrants.

At night, when most businesses in Tel Aviv have shut down for the day, the neighborhoods of these African migrants are just coming to life. The lights are on; the shops are open; peddlers are standing by their merchandise, which is placed on carpets on the street side. Thousands of people march up and down the street, as if in a festive happening. Hebrew is considered a foreign language here, and on many of the balconies “for sale” and “for hire” signs are hanging.

Aaron Chazan, a 67-year-old shopkeeper selling sunflower seeds and nuts on Levinsky Street, is one of the last veterans of the old Israeli way of life that once flourished in Tel Aviv. As a child, the store served as his family’s apartment. After his parents died, he turned the apartment into a shop for seeds and nuts. Recently, he has added dried fruit to his inventory. “What can I tell you,” he said, spreading his arms, “It’s the end of an era. In another year or two, it will be all over. I’ll sell my store by then, and all along the street, there will be a succession of shops run by the Sudanese and Eritreans. That’s it. The days when we were all Jews here are over. Today, you can count us on one hand.”

He already knows that, like other store owners in the area, he is bound to sell his shop to Eritrean or Sudanese immigrants. With time, he said has learned to distinguish between them and can tell, even from afar, who is Eritrean and who is Sudanese. “The Sudanese are darker skinned,” he notes.

Although he has a good relationship with them, like most Israelis, he believes that there is no choice but to return the majority of the illegal migrants to their countries. “True, I am earning a living from them,” he says, adding in the same breath: “But look around you; you can see for yourself. It isn’t the Israel that we aspired for and it isn’t the state we dreamt of. It’s like a state within a state.”

Back in the 1990s, the influx of illegal African migrants to Israel sparked a bitter controversy among Israelis. Many of them were torn between the basic human desire to help refugees in distress and the need to maintain the Jewish character of the state. Some have even gone as far as to warn, like former Knesset Member Yaakov Katz of HaIchud HaLeumi party, that if the flow of refugees does not stop, Tel Aviv could become the capital of the illegal African migrants — a city with a Jewish minority.

Simon, a 34-year-old Sudanese, immigrated to Israel when he was just 17. I met him outside his clothing store on Tel Aviv's Neve Shaanan Street, which has become the city's largest business center for African migrants. Although thousands of his compatriots joined him in his new country, he is rather unenthusiastic about it. “My friends and I came to Israel as migrant workers and were welcome here,” he recounted in fluent Hebrew. “However, all those who arrived here in recent years from Sudan and Eritrea are illegal immigrants. They do us harm and threaten our jobs. I see myself as an Israeli, but they are illegal immigrants. It hurts me that, because of their violence, they have given us a bad name.”

Meir Yaacovy serves as chairman of the south Tel Aviv merchants’ organization. I met him in his clothing store as he was about to shut down at 8 p.m. He, too, is one of the few left behind in the dwindling local Israeli community. “Until a few years ago I represented hundreds of Jewish merchants,” he told me. “However, today I can count them with one hand. All others are Sudanese and Eritrean immigrants. I have no problem with them, but unfortunately, some of them drink, get drunk, and then they go out on the street with knives to settle accounts.”

Yaacovy, who is about to turn 70, took me by the hand outside to the street. “Look down here,” he said, pointing at some dark marks on the pavement at the entrance to the store. “Just two days ago, there was a knife fight here between young Eritreans. How can you live like this? Even the police are afraid to intervene.”

Not far from his store are what locals refer to as the bike market and the cellular market. Dozens of used bicycles and hundreds of mobile devices are displayed on the ground, and offered for sale at ridiculously cheap prices. Although everyone knows that these goods are stolen, business goes on without interference. Even the police station, which is in sight, refrains from interfering with the dealings.

Back at Levinsky Park, it was close to midnight and the park was beginning to fill up. Hundreds of young people were lying on the grass, while others were sitting in groups, making a racket, talking. Many of them were holding beer bottles. Others were laughing out loud. Maybe because they were having such a good time or, perhaps, to forget how bad things really were.

It is not an easy sight to see — all those people who have crossed countries and continents, at times, at a risk to their lives, desperately looking for a better and safer future. In recent months, Israel has been encouraging their return to their home countries. At the same time, it almost hermetically closed the border crossing with Egypt. In July, just one illegal migrant managed to enter Israel — the lowest number in years. Have those who crossed the border reached a safe haven? It isn't at all sure.