Jon Stewart’s directorial debut tells the story of journalist Maziar Bahari who was imprisoned in Iran during the 2009 protests. 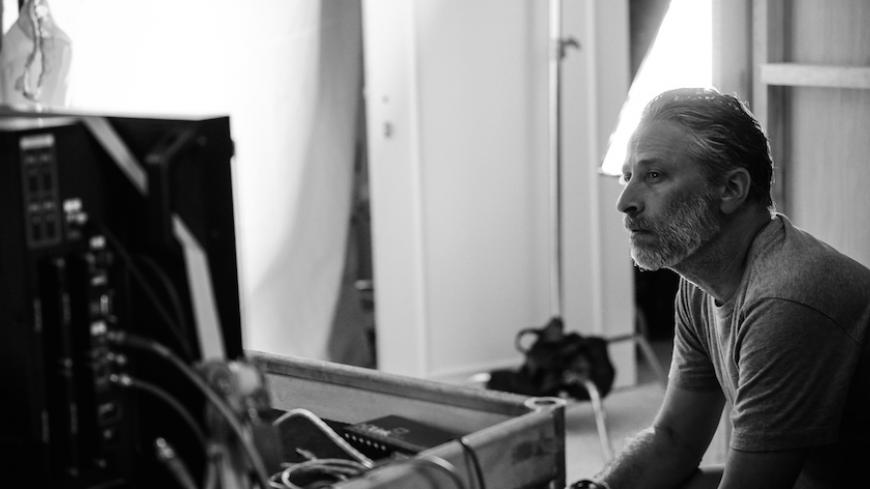 Mixing prison diary with political commentary and topping it off with a sprinkling of New Jersey jokes, Jon Stewart wants audiences to take him (mostly) seriously in "Rosewater," his directorial debut.

The movie, which opens in theaters Nov. 14, is adapted from “Then They Came for Me,” the memoir of former Newsweek journalist Maziar Bahari. Imprisoned by the Iranian government for 118 days in 2009 during protests over the country’s presidential elections, Bahari was accused of being a spy, a claim that authorities backed up with videos of his appearance in a Daily Show sketch. The bizarre circumstances of Bahari’s arrest and accusations that he was a spy for the CIA, MI6, Mossad and even Newsweek made the king of political satire a natural fit for the film adaptation.

Speaking to Al-Monitor in Washington, DC, Bahari said Stewart, who also produced the film and wrote the screenplay, understood the absurdity of his situation.

“I think we hit it off because he appreciated the humor in the story and in the book and I think that irrationality that looks humorous is based on reality,” Bahari said.

That irrationality included Bahari’s captor trying to shame him through constant questions about female colleagues and massage parlors, in between subjecting him to beatings and psychological torture. Rosewater, the name Bahari gives his interrogator because of his use of the cologne, informs his prisoner that he is well aware of the illicit activities that go on in “famous” New Jersey.

When Bahari decides to take advantage of Rosewater’s obsession by providing salacious stories of these imaginary massage parlors, "Rosewater" reaches its height, with Stewart's comedic timing and Bahari’s sharp wit combining with a conspiratorial glee.

That wit was what Bahari said helped him survive the experience. “It was through culture and it was a psychological battle that I knew I could win, that I knew I was the representative of many cultured Iranians that they’re afraid of.”

Mexican actor Gael Garcia Bernal plays the role of the imprisoned journalist, but Bahari asks audiences not to see the decision as an orientalist snub of Persian actors.

“From the beginning what we wanted to do was tell a universal story,” Bahari explained. “The problem with many of the people who auditioned was that they all were victims, but with Gael he was never a victim.”

Stewart is trying to present a nuanced portrait of Iranian society while avoiding the broad strokes of 2012’s "Argo," which was criticized for portraying its Iranian characters as villains. Sometimes these efforts can feel transparent as when the movie has youthful, telegenic and relatable characters speak in familiar clichés about freedom and resistance.

The wide-eyed optimism of the first third of the movie, set during the Green Movement election protests, creates some energetic protest pieces, but can also feel a bit forced. One scene, in which phrases from Twitter including "#democracy" pop up over people and skyscrapers until the camera zooms out to reveal the country of Iran as a word cloud, seems to put too much faith in the triumphant possibilities of social media for a post-Arab Spring world.

In these cases, Stewart's well-meaning sincerity and desire to be taken seriously as a director distract the audience from the heart of the story.

That heart depends on Bernal’s acting as he struggles to maintain his integrity. The performance is effective as Bernal radiates an inner strength even during many of the film's darker moments, providing the audience with someone to root for during lengthy interrogation and solitary confinement sequences.

Bahari’s release became a matter of geopolitics, eventually involving then-Secretary of State Hillary Clinton, but he does not view the film as a primarily political tool.

“I don’t think that this film is going to change the behavior of the Iranian government or [that] it is going to result in the nuclear agreement,” Bahari remarked.

A filmmaker himself, Bahari does hope that "Rosewater" "shows some of the people in the Iranian government, the Reformists and even the non-Reformists, how ridiculous their behavior is."

That, he said, would be a victory in and of itself. “You know, even if just one Iranian government official, high ranking or low ranking, thinks about that, I think our job is done.”