In Amman, US Secretary of State John Kerry achieved a compromise on Muslim Temple Mount prayers, showing that a firm US stance must be taken to resolve the long-standing Israeli-Palestinian conflict 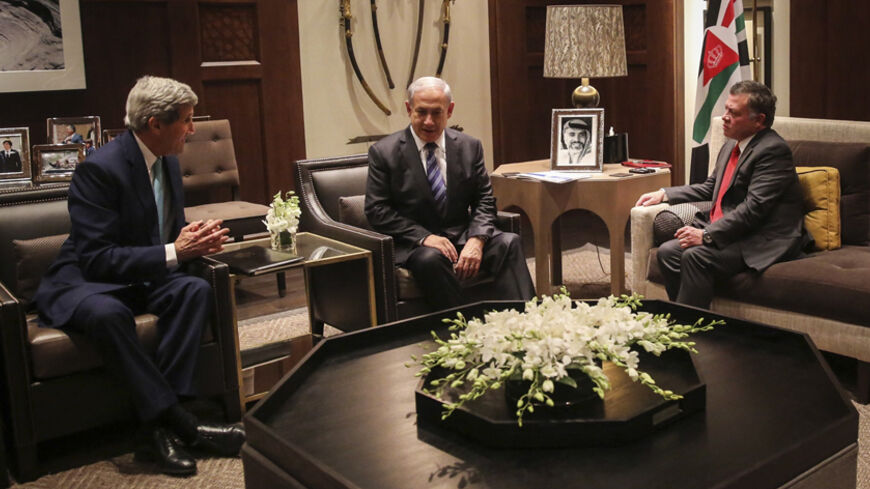 Let’s start with the good news: Secretary of State John Kerry managed to lower the flames on the Temple Mount, which threatened to set the region on fire and to stir up hundreds of millions of Muslims against Israel.

The secretary of state of the most powerful country in the world dragged Prime Minister Benjamin Netanyahu to the royal palace in Amman, conferred with Palestinian President Mahmoud Abbas and troubled Egyptian President Abdel Fattah al-Sisi to come to the phone. All this, to reach an arrangement enabling Muslim men not yet 50 years old to pray at Islam’s third-holiest site. At a news conference he held in Amman on Nov. 13, Kerry went out of his way to praise “all of the leaders today, particularly Prime Minister Netanyahu and President Abbas, … (who) made clear their desire to see this situation de-escalate and to move in the right direction.”

But most of all, it’s Kerry himself who deserves praise. Unfortunately and disturbingly so, relations between Netanyahu and Abbas are similar to those of a couple in the throes of divorce, whose feelings of animosity and desire for revenge overcome concern for their children’s welfare and well-being. Without the assistance of the marriage counselor from Washington, the two would not have managed to reach agreement governing the prayer arrangements on the Temple Mount.

Also good news is Netanyahu’s willingness to allow the intervention of outside parties, in full public view, in a dispute which he deems the “bedrock of our existence.” The prime minister, who adamantly rejects criticism over housing construction in Jerusalem, contending that Israel is sovereign over its capital and that the city’s standing is identical to that of Tel Aviv, traveled to an Arab capital to discuss the crisis in this compound.

Not only that, but in allowing young Palestinians to enter the Temple Mount, Netanyahu slaughtered with his very own hands his most sacred cow: the security of Israel’s citizens. The age limitation at the site was imposed due to “security needs,” and now, in one stroke the ascent to the Temple Mount of 49-year-old Palestinian men no longer endangered the safety of the Jews. Thus, two important precedents were set last week for the day when true negotiations would be conducted over a permanent arrangement between Israel and the Palestinians. The first, Jerusalem, is subject to negotiation. The second, security, is a relative matter.

The bad news is to be found in Kerry’s declaration that the United States is prepared to undertake such negotiations — only on condition that the sides themselves start creating a suitable climate. “We are fully aware of the challenges presented by the current tensions. Everybody understands that there are deeply held frustrations that are pent up on both sides,” the secretary said. “That’s why we all engaged in nine months of negotiations, and it is why all of us would like to see the day when that effort can be re-engaged and can lead to the peace that we all know is the only real, sustainable answer to the underlying causes of this conflict.” Words to live by. Indeed, “the current tensions” around rumors that Israel would violate the status quo on the Temple Mount are closely linked to frustration with the prolonged occupation and the declining hope that the diplomatic process under Kerry’s stewardship will bring about its end.

Nonetheless, Kerry opted for treating the latest symptom of the conflict — the status quo on the Temple Mount — and suggested that the couple call him when they are fully prepared to discuss the roots of the illness: the status quo in negotiations over an equitable divorce agreement. The secretary seems to have gotten the cause and result mixed up; for more than 21 years, since they decided on peaceful cohabitation, the sides have spent most of their time in creating fatal storms and spreading ill winds.

How many years do the children of both peoples have to suffer until the American custodian deems the climate in the Middle East appropriate for his return visit to the region? Will the climate improve when the United States imposes a veto on a UN Security Council decision to recognize Palestine or after the Palestinians take Israel to the International Criminal Court?

The news about the conditional US intervention coincides with comments made at a Tel Aviv conference by Justice Minister and Hatnua Party leader Tzipi Livni about her conditional membership in the Netanyahu government. The standard-bearer of the two-state solution is awaiting suitable weather to walk out of the Netanyahu-Liberman-Bennett coalition. “I ask myself almost every day whether I should still be in government,” Livni said, speaking the same day as Kerry’s news conference in Amman. “I assume that the moment will come when I say, ‘That’s it.’”

Livni’s associates told Al-Monitor last week that she was in full agreement with her party’s outgoing Minister Amir Peretz, who said Netanyahu has remained an uncompromising right-winger.

But Livni rightly fears the judgment of the voters. According to a poll aired Nov. 15 on Israeli TV Channel One, if Livni were to declare that she has had enough and were to lead to early elections, her party would plummet from six to three Knesset seats, whereas the right-wing bloc (without the ultra-Orthodox parties) would rise from 43 seats currently to 55. One of the main reasons for the rise of the right and decline of the center-left bloc lies with Netanyahu’s success in casting blame for the failure of the diplomatic process onto Abbas and Hamas.

Livni yearns for the moment when the United States stops waiting for a “climate change.” The future of the Middle East is not the weather. Courageous, visionary US leadership can, and should, influence it beyond simply talking. All the leadership has to do is place on the table the Clinton parameters of December 2000, which dealt with all the land mines, including the Temple Mount explosives. The time has come for the Israeli public to stop walking between the drops and to choose one of two options: a small Jewish and democratic state or a large, isolated apartheid state.