By torpedoing negotiations on one hand, while setting conditions for their resumption on the other, Foreign Minister Avigdor Liberman's tactics enable him to gain points with the left and the right of the political spectrum, pursuing his route toward the premier's seat. 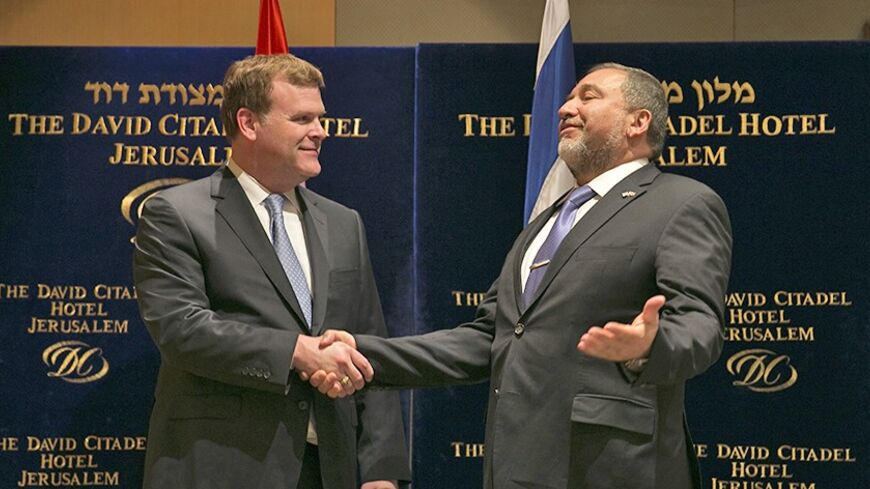 The American plan was to extend the negotiations between Israel and the Palestinians until 2015 and then raise the level of talks. By facilitating a series of personal summit meetings between Prime Minister Benjamin Netanyahu and Palestinian President Mahmoud Abbas, aka Abu Mazen, the Americans had hoped that the two leaders would be able to break the ice, that the chemistry would take its course and that the core issues would be addressed. They also hoped to find a way to overcome the insurmountable obstacles. All this, through a series of interim arrangements, or any other idea, which would enable the leaders to cope with their constituents and survive politically on one hand, but also not derail the negotiations and leave a glimmer of hope on the other.

Nobody expected Netanyahu and Abbas to foster the same almost-familial warmth that existed back in the day between the Palestinian president and Israel’s former Premier Ehud Olmert. Nobody believed that Netanyahu would be able to make the same kinds of concessions that Olmert was willing to make. Yet personal chemistry is an intangible ingredient. This, combined with international pressure, American backing and parallel professional tracks between the teams, should have at least cleared the air. That’s at least what US Secretary of State John Kerry and his team believed would happen until last week.

As of April 8, efforts to revive the negotiations continue. The American administration has intimated that time is running out. The White House urges Kerry to concede failure and come back home. Yet the mortally ill patient lying on the operating table keeps twitching. The team of resuscitators includes chief negotiators Tzipi Livni for Israel, Saeb Erekat for the Palestinians and the American brokers headed by US Special Envoy Martin Indyk.

So what triggered the blowup? Henry Kissinger’s unforgettable aphorism that there is no foreign policy in the Middle East, only a domestic one, comes alive with each generation, and under every government or coalition, be it by the side of an Israeli or a Palestinian leader.

On the day the talks between Israel and the Palestinians broke down, Israel’s Housing Ministry published a new tender for several hundred residential units in Gilo — a neighborhood in East Jerusalem. According to Tzipi Livni, who ran the negotiations until that point, the tender was ''consciously and deliberately'' published by Housing Minister Uri Ariel, who serves as the right-wing standard-bearer in Netanyahu’s government and the representative of the most radical among the settlers. Hailing from HaBayit HaYehudi Party, Ariel has devoted most of his adult life to building settlements in Judea and Samaria.

It was the publication of this tender that was the straw that broke the Palestinians’ back. “Skipping” the fourth phase of the prisoner release, which should have taken place a few days earlier, Israel also tried haggling over the release of Arab Israeli prisoners (14 all told) — a deal that most Israelis find objectionable and one that does not have a majority in the government. Then suddenly came the tender in Gilo. Going ballistic, the Palestinians felt they were being sold down the river. That same evening, Mahmoud Abbas stood in front of the cameras and signed 15 requests to join UN treaties.

A hindsight analysis of this move proves to what extent a political-diplomatic move can be foolish. The tender that sparked the fire had to do with building residential units in Gilo, which even the most radical among the Palestinians know will remain in Israeli hands in the setting of a permanent status agreement. But that’s not the issue. This is an old tender which had been previously published yet disqualified owing to technical errors. It was amended several times and then republished. Having no diplomatic value, it should not have upset anyone. But that morning the Palestinians were unaware of all these details. They only heard the news and read about the new tender on Internet websites that gleefully kindled the fire.

Housing Minister Uri Ariel resorted to a cheap, perhaps even a primitive trick. But nothing more was needed. This is the reason why Ariel sits in the government, to blow up any diplomatic process and extinguish any glimmer of hope. This time, he succeeded beyond any expectations. Rather than Netanyahu’s coalition reaching a crisis, perhaps even crashing, the negotiations crashed instead.

Anyone who thinks that it is only Israel that is engaged in these blowups is headed for a surprise. The other side has more Uri Ariel-style people than Israel. The Palestinians are by far more divided than Israelis are. Split between two entities, their most politically powerful force (Hamas) is opposed to any dialogue with Israel. Mahmoud Abbas' Fatah is also divided and between various internal forces (Fatah senior official Marwan Barghouti) and external ones (former Fatah official Mohammed Dahlan), whose only common denominator is their efforts to torpedo as much as they can Mahmoud Abbas' attempts to reach an arrangement. Why is that? It’s because they want to succeed him.

A day after the blowup, Israeli Foreign Minister Avigdor Liberman poured a bucket of icy water on the situation. Accusing the Palestinian Authority of “real clear blackmail,” he launched a series of belligerent statements, topping it off with an assertion that given the current political climate in Israel, holding an early election was the better option. Veteran “Libermanologists” know that in such situations the Israeli foreign minister acts like an enfant terrible who has been told off and sent to stand in the corner because of his antics. First he kicks and then seeks conciliation. In a series of interviews following his speech on Sunday, April 6, at the Jerusalem Post conference, Liberman clarified that he continues to support the negotiations and Kerry’s efforts. However, he would agree to resume the negotiations provided the Palestinian Authority retracted its attempt to join those 15 UN treaties.

What has happened here is that despite making noises of a party-pooper and appearing to raise the bar, Liberman did the exact opposite. The only thing the Palestinians are required to do at this point — according to Liberman — is to take back the requests they submitted. This is certainly doable. If, as a result, they get that fourth phase of prisoner release as well as the Arab Israeli prisoners, maybe there is a basis for some hope here. Liberman continues to oppose the prisoner release, but he does allow his Yisrael Beitenu party ministers to vote as they deem fit. What this means is that Minister of Internal Security Yitzhak Aharonovich and Minister of Immigrant Absorption Sofa Landver might abstain from voting, thus allowing 10 ministers who do support the deal (five from Yesh Atid party, two from HaTenua party, as well as Netanyahu, Minister of Strategic Affairs Yuval Steinitz and Defense Minister Moshe Ya’alon) to pass it narrowly. This way, Liberman manages to stay on the right and on the left at the same time. He can on one hand torpedo the negotiations, while creating conditions for their resumption on the other. That's called politics.

One day after that speech in New York, Liberman addressed a few hundred Russian emigrants at a synagogue in Brooklyn. It is not inconceivable, he told them, that one day there would be a Russian-speaking Israeli prime minister. Quickly clutching onto this assertion, the pundits considered it to be a statement from Liberman that he was poised to become Israel’s next premier. He, of course, put it back in context, explaining that he referred to Israel as the real country where the sky was the limit. According to him, the speaker of the Knesset is of Russian origin as are the chairman of the Jewish Agency for Israel (JAFI) and the country’s foreign minister. So there’s no reason why there cannot be a prime minister of Russian origin.

Despite the all-clear sign, it must be borne in mind that Liberman, as always, continues to strive for this coveted goal. According to Israel’s electoral system, the prime minister is the one who gets recommended to the president by a majority of the elected Knesset factions. Former Welfare Minister Moshe Kahlon, who left the Likud party due to Netanyahu’s policy and is expected shortly to set up a new party, might potentially recommend Liberman. The same goes for Finance Minister Yair Lapid, who shares a political alliance with him. Chairman of the Labor Party Isaac “Buji” Herzog is not an inconceivable option either. So anything is possible. The truth of the matter is that Israel is indeed the country where the sky is the limit. Liberman is an “alive and kicking” proof of that, and he still aspires to move up.