Israeli Prime Minister Benjamin Netanyahu must manage a right-wing coalition that has no interest in a release of Palestinian prisoners to keep the peace talks going. 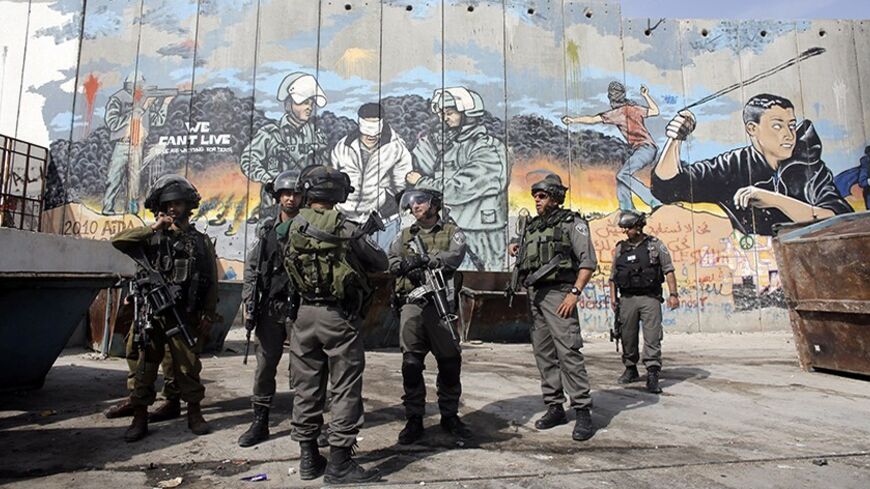 Israeli soldiers and border policemen stand in front of a section of Israel's controversial barrier at Aida refugee camp in the West Bank town of Bethlehem, March 24, 2014. - REUTERS/Ammar Awad

After long hours of discussion, a senior diplomatic-security forum that met last week [March 24] to discuss the immediate implications of a breakdown in the negotiations with the Palestinians released a pessimistic and worrisome report. The participants in the forum, which was sponsored by one of Israel’s leading research institutions, had played key roles for years on the diplomatic and security fronts, some of them until only recently. The purpose of this brainstorming session was to present potential scenarios in advance of the seemingly inevitable breakdown of the talks with the Palestinians.

Although there have long been similar prognoses of Israel’s diplomatic isolation should there be no peace process, the picture painted this time is even more depressing than usual. There was unanimity at the table that a negative outcome of the talks — renewed in June 2013 — would place Israel in an even more diplomatically problematic situation.

According to the forum’s participants, the immediate implications might be: international legitimization of the Palestinian appeal to the UN for recognition, with European backing, and a parallel intensification of the settlement boycott phenomenon — with it leaking across the Green Line — causing harm to the Israeli economy. And as if that were not enough, the members of the forum also estimated that the United States would be left feeling disappointed and hurt if the negotiations fell apart, after taking every conceivable step to ensure that they succeed. And so, the US would reduce its involvement in the region, start sitting on the fence and avoid helping us in all matters pertaining to Israel’s legitimacy in Europe.

It is reasonable to assume that Prime Minister Benjamin Netanyahu is very familiar with their assessments, and that he is aware of the severe implications of a blow-up in the negotiations with the Palestinians. Otherwise, what reason could he possibly have to try to buy more time for the negotiations, which were supposed to end on April 29?

If the information published is true, and Netanyahu really is preparing to release an additional 400 prisoners, including Israeli Arabs, in exchange for a half-year extension of the talks, then this is a sure sign that Netanyahu is under intense pressure. The prime minister understands the implications of the new situation and is prepared to pay an exorbitant and exasperating price for just a few more months of maintaining the diplomatic status quo. Netanyahu could just have easily skipped the hurdle of this prisoner release, including a delay of the fourth “pulse” over which all of the debate is now focused, if he would just agree to freeze construction in the settlements. The problem is that right-wing domination of his rule prevents him from choosing that track.

To Netanyahu’s credit, it should be said that he is fully cognizant of the severe diplomatic and economic implications of an end to the diplomatic lull, from which he benefited as long as there was at least a facade of negotiations. He understands that Israel will be entering uncharted territory, which will lead over time to far-reaching and deep-rooted diplomatic isolation. He also realizes that even if the Americans place some of the blame on Palestinian President Mahmoud Abbas, Israel will ultimately pay the price, while the Palestinians will continue to advance their “diplomatic intifada” in the international organizations.

Unlike Netanyahu, the ministers on the right have been showing shortsightedness toward what seems like a diplomatic failure which, in the long term, will turn the State of Israel into a pariah in Europe, even among its closest friends.

On Sunday, March 30, at the start of one of the most critical weeks in the negotiations, Netanyahu looked like he was grasping at straws. He knows what Abbas knows and what the Americans refuse to understand. The negotiations led by Kerry over the past nine months are fast approaching their inevitable crash.

While the American team led by US special envoy Martin Indyk was racking its brains to find a compromise that would allow the negotiations to continue, in his weekly meeting of Likud ministers, Netanyahu suggested that the ultimate fate of the negotiations would be clarified in just a few days. They would either explode or grind to a halt; “in any case,” he said, “there won't be any deal without Israel knowing clearly what it will get in exchange.”

Of course, what Netanyahu would like to receive in exchange is an extension of the negotiations, but the price of such an extension could send serious shock waves through the coalition. Netanyahu realizes that time is precious, and that each month that the Palestinians are being delayed from appealing to the United Nations serves him by postponing the inevitable. Still, the right-wing members of his Cabinet are not making it easy for him.

And it’s not just the chairman of the HaBayit HaYehudi party, Minister of Economy and Trade Nafatali Bennett, announcing on his Facebook page that the release of 400 prisoners would “never ever happen,” or his No. 2 man, Housing Minister Uri Ariel, declaring that doing so would be grounds for his party to quit the government. Ministers from Netanyahu’s own Likud party were saying the exact same thing. For example, Minister of Intelligence Yuval Steinitz attacked Mahmoud Abbas by claiming that he does not really want peace, and that therefore the fourth pulse in the release of prisoners should not be fulfilled. And then there was Minister of Transportation Yisrael Katz, who asked cynically, “What will happen at the end of the year, just nine months from now? Won’t they want to go to the UN then? Who will we release then? More terrorists?”

Nor does that even take into consideration the defiant campaign by Deputy Defense Minister Danny Danon, who is leading the diplomatic opposition to the prime minister from within the Likud party, while consistently attacking his leadership.

Obviously, Netanyahu is using these in-house political pressures to explain the impossible political situation he is facing to US Secretary of State John Kerry. The Americans are showing increasing interest in the goings-on in the Likud. They try to obtain assessments about the real situation from senior Likud ministers. They take a special interest in the stability of the prime minister vis-à-vis Danon and his supporters.

As far as Netanyahu is concerned, the clash between Israel’s diplomatic interests and the right-wing coalition is not easily resolved. This raises an important question: Will he be ready to take a risk and see whether HaBayit HaYehudi party really fulfills its threat to quit the government if more prisoners are released in exchange for an extension of the negotiations? So far, Bennett and Ariel have only threatened, preferring to contain the previous prisoner releases while clinging strongly to their seats at the Cabinet table.

Netanyahu's preference for the prisoner release option stems out of political pressures and survival needs. It contradicts the negotiation interest, as well as the security interest. Senior security officials have warned of the security implications and the damage to Israel's deterrence that the release of terrorists would have. They side with the settlement freeze option instead. It is just too bad that voices from the center-left faction in the government, represented by Justice Minister Tzipi Livni and Finance Minister Yair Lapid, aren’t heard enough. Sometimes they aren’t heard at all.

It is therefore believed that, just like in previous rounds of gestures to the Palestinians, Netanyahu will manage to reach a series of silent understandings with them and attempt to win their approval for a quiet freeze in settlement construction, rather than engage in a demonstrative release of terrorists. Such a scenario would grant Netanyahu another half a year of quiet and enable him to maintain the diplomatic status quo. In the end, however, even this six-month grace period will end, and Netanyahu will no longer be able to avoid anymore making diplomatic and political decisions. And the inevitable result of this is that Netanyahu will be forced to make the necessary changes to his coalition.